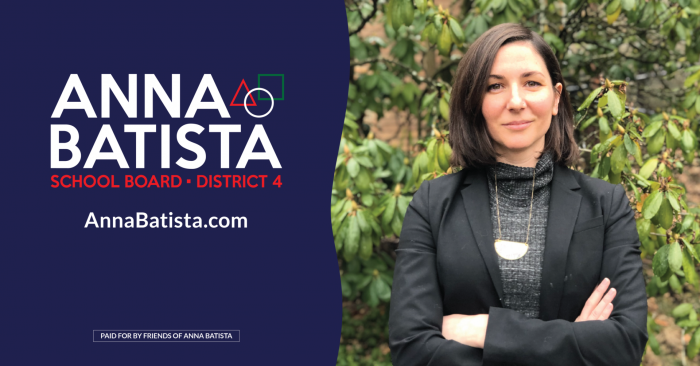 We are revisiting our Political Q&A series for the upcoming elections of 2019. We’ve reached out to candidates who are pro-choice and pro-LGBTQ, asking them a series of questions about their campaigns. We’ve sent out about a dozen Q&A’s to folks who agreed to participate. Candidates can be anywhere in Pennsylvania running for any level of office. Please note that these are not necessarily endorsements, more of an opportunity for candidates to connect with the LGBTQ community, progressives neighbors, and others with an interest in Western Pennsylvania. If your candidate would like to participate, please contact us pghlesbian at gmail dot com. We have

Our next respondent is Anna Bastista. She is seeing election to the open seat in District 4 of the Pittsburgh Public Schools.

I’ve published a Q&A with Liv Bennett, Deb Gross and now Anna Batista. I’ve sent Q&A’s at their request to Kenneth Wolfe, Pam Harbin, Anna Batista, Bethany Hallam, Judith K. Ginyard, Kierran C. Young, and Jessica Rothchild (open lesbian running for Scranton Council), Bobby Wilson and Bruce Kraus and will publish when they submit it. Allegheny County Council Candidate Christine Allen and PPS District 4 Board candidate Pam Harbin have declined to participate and I’ve sent the information about the Q&A to other regional candidates, inviting them to request a Q&A.

I realize it takes times to complete this Q&A, but it also takes times to create it (see our new Flip the Script series for more on that.) And I think the LGBTQ community deserves every moment of that time. 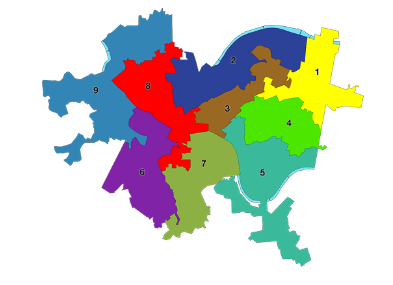 The Office You Seek: School Director for Pittsburgh Public School Board District 4

How do you describe your identity? I am a woman, a wife, a mother, a stepmother, a progressive, and a policy nerd.

Tell us about the first LGBTQ person you met and what impact they had on your life? The people my brother and I would go live with if my parents both died were Larry and Jerry, my mother’s college boyfriend and his partner. They were there the day I was born, and in my mother’s fairly conservative family, they were the only people in our close circle that my parents – and frankly my brother and I – could imagine raising us with values that matched ours.

I grew up with visits back and forth to Ithaca with Larry and Jerry multiple times a year, and I remember the slow and organic dawning awareness that they were a couple like married couples, but both men. (And, until recently, not married.) Along with my parents, their relationship formed the model of what a loving, functional relationship should be.

Please tell me about your familiarity with the LGBTQ community in your district, the public schools, and the region. Thankfully, awareness of LGBTQ students and their need for support and equality is slowly growing among PPS students. In the past few years, for example, Brashear High School’s Gender Sexuality Alliance pushed the issue to the forefront of the district’s consciousness. This year, PPS held it first Gender Inclusive Schools Communities symposium at CAPA High School, speakers included same-sex marriage advocate Evan Wolfson and Ted Hoover of the Persad Center. The gender nonconforming students in our lives report that efforts are underway at schools such as CAPA to provide non-gendered bathrooms and educate the school population on gender nonconformity, but that there is more work to do. Students need to traverse several floors at times to reach these bathrooms, and students- not just teachers- need to hear more about these issues. PPS has recently started participating in Pittsburgh’s Pride Parade, and passed a resolution to not be involved with the marathon after Chick-fil-A became a sponsor.

I am proud that Pittsburgh was the first municipality in Pennsylvania to ban conversion therapy, and I absolutely support the County Councilors Paul Klein and John DeFazio’s proposed ban for all of Allegheny County.

It is non-negotiable that LGBTQ folx have full, legal, and nondiscriminatory protections in all aspects of their lives, especially in the public schools.

Based on this, what do you understand to be our top LGBTQ concerns and priorities for the School Board? How will you respond to those priorities?

First and foremost, we must do everything we can to bring bullying down to zero in our schools. No student can learn and grow while being made to feel bad about who they are. The anti-bullying training at PPS needs to be fully implemented on an ongoing basis, and reach every adult and student in our schools.

In order to demonstrate to students that the Pittsburgh school district is truly committed to LGBTQ equality, the topic also needs to be represented in what we are teaching––and how we are treating––students every day. The two most obvious places to include LGBTQ topics in curriculum are in health and sex education, and in social studies classes when studying civil rights history and current events. In both these subjects, the topics of being LGBTQ and LGBTQ equality should be addressed directly.

Other subject areas should include discussions of prominent people in the subject area who identify as LGBTQ, particularly when their identity intersects with the course of their work. Alan Turing is one well-known example of a brilliant mind whose work in computing was negatively impacted by persecution for his homosexuality, and is certainly the kind of information students in a science or technology class can receive while learning about his scientific contributions.

LGBTQ students must also be treated with respect both inside and outside of the classroom. PPS’s support for LGBTQ students should be applauded; however, students I have spoken to at numerous schools have shared that they still face bullying and homophobic slurs from other classmates. This issue needs to be addressed through programs for students and teachers that raise awareness of homophobic language and behavior and the harm they cause; the district’s stance against them; and how teachers and other students should address such discriminatory behavior when they see or hear it.

Outside of the classroom, it is imperative that every school have bathrooms for gender nonconforming students, and that those bathrooms are accessible during the short breaks between classes. And of course, any student’s preferred bathroom choice should be respected.

I pledge to implement LGBTQ celebratory curricula into all our schools, make sure all LGBTQ students feel safe and supported in all PPS schools, and ensure that school leadership is equipped to effectively and respectfully address LGBTQ issues among students and staff.

How does intersectionality inform your work? As the son of Atlantic City boardwalk performers, my dad grew up poor and among the marginalized slice of society that included early 20th century immigrants, religious minorities, wage laborers, gender non-conformers, and artists and performers who were a little bit “different.” My earliest lessons as a kid from him were that “people are people” and that those on the margins of society are often facing multiple complex challenges, forces, and judgements outside of their control.

I am lucky to have an identity easily accepted by most of society, and I recognize that this colors my experience of and optimism for the world. I recognize that not everyone has this experience, and that it is important to listen to their reports on what their experiences are actually like. This is why I enter any problem-solving situation by listening. I don’t hold the answers for everyone, but I can work hard to navigate the best solutions given a diverse range of inputs.

The threats of ‘religious liberty’ laws and exemptions target both LGBTQ rights and women’s rights. How does the School Board navigate this equivalency of personal religious freedom with systemic oppression and control of underserved people? A person’s identity is not something that another person has a right to be “free” from. The School Board should not recognize this equivalency, full stop.

One challenge in PPS is the uneven investment of schools in resources like GSA’s which can often be overly identified with the assigned staff support. I hear from GSA sponsors who need to take a break, but feel tremendous guilt and anxiety because the district has no one to step in. How can the District support faculty advisors doing this important, but intense work and assure a continuity of supports for students who depend upon GSA’s? I have also heard that GSA sponsors can feel overworked and overburdened with this important work. I think the District could address this in a number of ways: pay the sponsors a stipend; understand that given the emotional nature of this work, LGBTQ students must have a network of advisors (not just one) to turn to; and make sure that PPS is a safe place for LGBTQ teachers so that more LGBTQ teachers can talk openly with students about identity and discrimination. The district should support faculty who undertake these roles, and aid in cultivating a network of adults to step into these roles across the district.

Tell me about your other endorsements and supporters. I am proud to have the endorsement and full support of the person currently holding the seat I am seeking, Lynda Wrenn, as well as her predecessor, Bill Isler. Additionally, I have the support of Mayor Peduto, Chief of Staff Dan Gilman, and Rich Fitzgerald – all of whom are residents of my district! By and large, my supporters are PPS families who live in my district and who want to see schools that work for everyone.

Is there anything you’d like to add? As a product of a low-income, diverse public school system myself, I have always felt that an institution that doesn’t work for everyone is an institution that should be fixed. I pursued a Masters in Public Policy because I wanted the tools to address our collective challenges and build a great public sector. I volunteered to fight partisan gerrymandering for Fair Districts PA so we could have a voting system that actually counts and is responsive to everyone. For my capstone project at the Heinz School at CMU, I chose to help identify safer walking routes for children walking to school in Pittsburgh’s Homewood neighborhood, because we all deserve school systems we can feel safe in. These institutions and systems are things that human beings have to deal with or interact with everyday, and the way the systems are set up determine a person’s success or failure. Let’s make sure we’re building institutions that work for everyone.

Where can readers find your campaign on social media? You can check out my Facebook page at Anna Batista for PPS School Board, as well as my website at AnnaBatista.com. 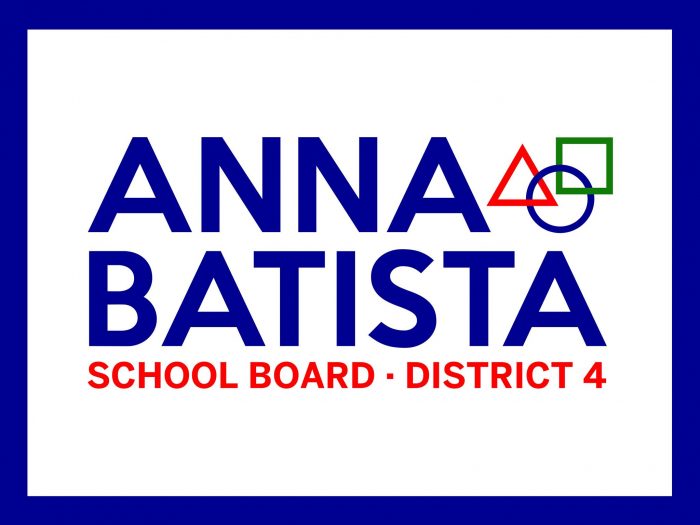