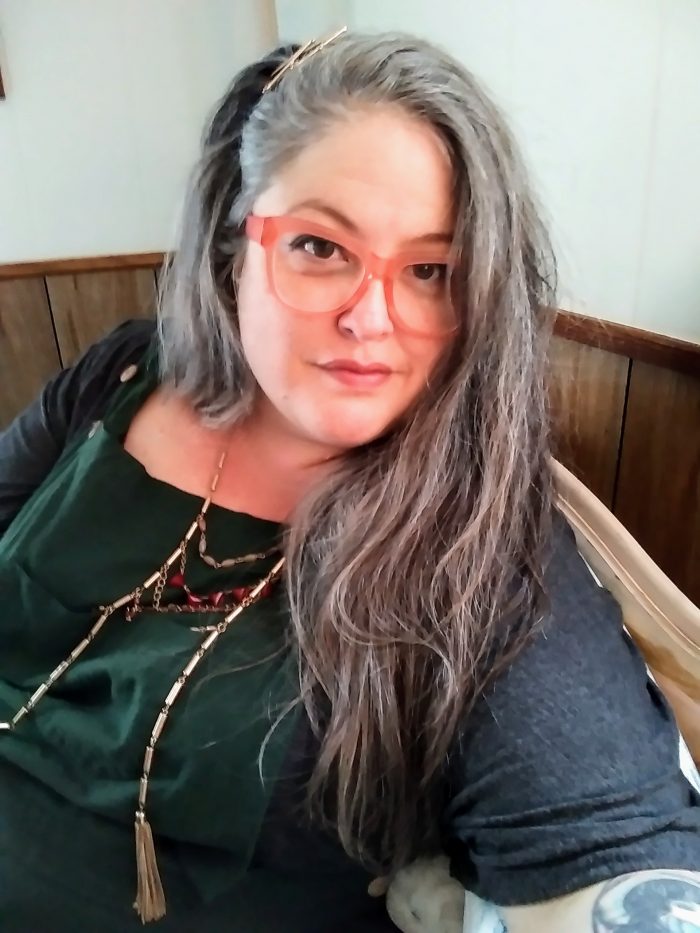 “I WANT to be seen as queer, as it is a foundational part of my identity.”

I am a white cis fat queer femme dyke.

I grew up rural and working class, and alllmost southern. I hail from southern West Virginia which is actually just deep Appalachia, but often gets lumped in with the “south”–especially now that it’s a red state, maddeningly. (I mean, the state was formed on June 20, 1863, when it seceded from Virginia to join the Union, dang it!)

I also, in some circles, identify as “leather” but I try to minimize using any actual leather or other animal products in my life.

I’m a vegetarian and huge animal-lover.

I’m a nerd, a dork, a huge reader, a lover of libraries, a voarcious volunteer, a snowflake bleeding heart sjw, a homebody, a cantankerous middle-aged person, a slightly extroverted introvert, a bosslady, a long-time single weirdo.

I have chronic physical and mental illness conditions.

I am large. I contain multitudes.

Please describe your coming out experience. Where did you find support? What challenges did you face? It was gradual. I came out as bi, then lesbian, then queer. At first I didn’t have support, and didn’t know any queer people. I first told my boyfriend when I was a freshman in college that I liked girls, and had a little crush on a girl I would see around on campus. He told her and everyone else. It scared me back into the closet for a bit, but I eventually found my way out. 🙂

How would you describe yourself NOW in terms of “being out”? I’m so out that I feel a slight disappointment on National Coming Out Day that I have no one else to come out to. But that said, my presentation is femme, and so I often get mistaken–even/often by other qlgbt+ folks–as straight. So, in that way, I’m always coming out. I WANT to be seen as queer, as it is a foundational part of my identity. Heck, I once was assumed to be straight when I was dressed head-to-toe in rainbows and AT a Pride Parade. What’s a femme gotta do to be seen?

Tell me about the first LGBTQ person whom you met. What impact did they have on your life? Oh, Katie. I met you in a women’s studies group, and you were so smart, and super cool, and you had a cute girlfriend, and you didn’t shave your pits, and I loved you so much from afar. I couldn’t tell if I wanted to be you or be with you. I think both. [Katie wasn’t the first qlgbt+ person I met, but she was the first person I *realized* was queer when I met them.]

Past or present, favorite LGBTQ character or creator in television, film or literature? Please tell us why. Tilda Swinton’s portrayal of the title character in the film Orlando ROCKED MY WORLD. I am so attracted to androgyny and genderfuckers. Swoon.

How do you stay informed about LGBTQ issues? Friends, community, the internets.

Describe your geographical community. I’m in Pittsburgh, and I think it’s mostly friendly, but I feel much less confident about that when leaving city limits. The city is definitely friendlier than it was when I first moved here in 1998.

Describe your local or regional LGBTQ community. I’m part of a queer chosen family, and it’s just like “real” family. We support one another, holiday together, fall out and make up like siblings, and show up for one another in all sorts of ways. It has been incredibly profound to have found these fellow queers, and create this radical version of what family can be. My family of origin is definitively Not Down, and yet I found a family after all.

As to my wider community, I’ve now lived in Pittsburgh for over 20 years, and Pittsburgh being Pittsburgh, I seem to at least have a casual acquaintance with All The Queers, at least within a degree or two. <3

Have you ever experienced discrimination based on your identity? Specifically, in a job setting, when applying for housing or while in public. Not that I am aware of. I have the privilege (and sadness) of generally being read as straight.

Have you experienced microagressions based on your identity? Think everyday indignities & slights that you experience, but would not characterize as discrimination. Please describe in your own words. Definitely. I think we all do daily. I try to always respectfully address these issues that happen to me or those I observe happening to others because silence = complicity. I try to opt for integrity over comfortability, and that’s really hard sometimes. It is never fun to be seen as the party pooper, but I think it’s super important for us to challenge false narratives and assumptions.

Tell us about your access to health care in Western PA. Has it been LGBTQ competent (or not?) I absolutely expect it to be, and that has mostly been my experience, though I certainly have had to explain in minute detail a few times when I’ve answered the “could you be pregnant right now?” question by saying that I haven’t had procreative sex or that I haven’t slept with cis men (when that’s true), and a few doctors haven’t had a clue what I meant. I’ve followed up with sending them articles and other resources.

Are there issues impacting your LGBTQ neighbors that aren’t visible or part of the local dialogue? YES. I wish that the “homosexual agenda” would focus more on trans folks–especially BIPOC (Black/Indigenous People of Color) transwomen, youth, and seniors. I personally don’t care at all about assimilation, and while I’m so happy and grateful that qlgbt+ have the right to marry if they choose, I think that there are many more pressing issues.

What would you like to see elected officials do to improve life for LGBTQ Pennsylvanians? Gain and keep equitable human rights for ALL people. Don’t sacrifice the most vulnerable of us to move forward an agenda that doesn’t include all of us.

Please share a lived experience, anecdote or fact about life as an LGBTQ person in your community. I used to have a coworker that had frequent and frustrating-sounding conference calls. Whenever she got exasperated, she’d exclaim, “I feel like I’m just putting my finger in the dike here.” I’d always laugh to myself thinking, “Not so fast, Arlene. I don’t know you like that.”

Beyond discrimination, what other barriers create challenges for your LGBTQ neighbors? Equity (lack of). Qlgbt+ folks are more likely to be low income, homeless, and less likely to receive affirming healthcare. We need to center QTPOC’s needs most urgently in our current America.

What LGBTQ friendly resources are available for your neighbors? So many things! All kinds of human service support, arts, events, etc! Google it–there’s so much available now!

What is your greatest fear for the LGBTQ community in Western Pennsylvania?  The continuing spread of, and current empowerment of by our freaking government of bigotry, transphobia, homophobia, racism, etc.

What is your greatest hope for the LGBTQ community in Western Pennsylvania? All our human needs are met, and all of us can thrive.

What can allies do to support your LGBTQ community? Donate your time and money to causes and organizations you profess to care about when you are able. Show up. Buy queer, buy Black, buy local–vote with your dollars. Show up for ALL social justice causes and collaborate instead of isolate.

How can gay men and lesbians support the bisexual, transgender and queer members of our community? Share resources, share power. If those folks aren’t at your table, you’re doing it wrong.

What motivated you to take part in this project? Contributing to a community-building/affirming project.

Finally, what question should I have asked? Please also share your answer. Favorite book/music/film/art by a queer person this year? For me this year…book: a tie between The House of Impossible Beauties by Joseph Cassara and The Animators by Kayla Rae Whitaker, music: Janelle Monae’s Dirty Computer