You’ve probably read this elsewhere, but I wanted to show my solidarity by publishing this letter here.

I also want to point out that there are a lot of members of the Block family who derive financial benefit from the operations of Block Communication, Inc (and the Post-Gazette) which affords them a degree of financial comfort and security that most of us will never know. There are a lot of folks in that family whose sole public action was to publish a chastising letter.

I call foul on every members of this family who accepts a dividend check or any other privilege afforded by their affiliation to the Block family name and legacy, for their moral failure to the employees of the Post-Gazette and the residents of the Pittsburgh region.

You might know some of these folks, many are prominent members of Pittsburgh’s progressive community. When you lambaste the Post-Gazette for promoting racism and sexism and harming the values associated with responsible journalism, you cannot turn a blind eye to these individuals culpability and complicity. How much will they tolerate before they take actual action to change the balance of power?

Their failure to act while moving with impunity throughout the Pittsburgh region is a real disgrace. I don’t know the ins and outs of corporate maneuvers, but I certainly know how families work. I know that a chastising letter is pretty low on the ladder of family conflict. Surely, stockholders and dividend beneficiaries can do more. Or explain themselves better while they mingle with the progressive elite of Pittsburgh. Do something, damnit. There are courageous people throughout the region who are confronting toxic family members whose actions have far less impact on millions of people.

Rather than cancel your subscription to the Post-Gazette and hurt the remaining employees, maybe think about where you take yoga classes or get veterinary care or buy fabric. Those are things where you have many options. We only have one semi-daily newspaper. It must be our priority.

I won’t cancel my subscription because someone has to remain vigilant and I am among those with the financial privilege to do so. The latest misogynistic cartoons are reprehensible, but we are almost totally without power to do anything than stand witness as Rome burns. It is up to the people with actual power and moral authority to take action. 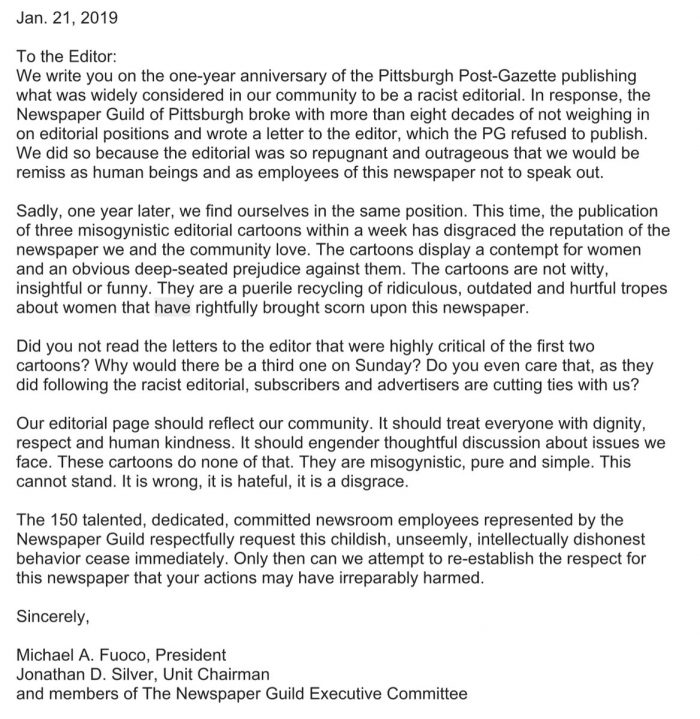 We write you on the one-year anniversary of the Pittsburgh Post-Gazette publishing what was widely considered in our community to be a racist editorial. In response, the Newspaper Guild of Pittsburgh broke with more than eight decades of not weighing in on editorial positions and wrote a letter to the editor, which the PG refused to publish. We did so because the editorial was so repugnant and outrageous that we would be remiss as human beings and as employees of this newspaper not to speak out.

Sadly, one year later, we find ourselves in the same position. This time, the publication of three misogynistic editorial cartoons within a week has disgraced the reputation of the newspaper we and the community love. The cartoons display a contempt for women and an obvious deep-seated prejudice against them. The cartoons are not witty, insightful or funny. They are a puerile recycling of ridiculous, outdated and hurtful tropes about women that have rightfully brought scorn upon this newspaper.

Did you not read the letters to the editor that were highly critical of the first two cartoons? Why would there be a third one on Sunday? Do you even care that, as they did following the racist editorial, subscribers and advertisers are cutting ties with us?

Our editorial page should reflect our community. It should treat everyone with dignity, respect and human kindness. It should engender thoughtful discussion about issues we face. These cartoons do none of that. They are misogynistic, pure and simple. This cannot stand. It is wrong, it is hateful, it is a disgrace.

The 150 talented, dedicated, committed newsroom employees represented by the Newspaper Guild respectfully request this childish, unseemly, intellectually dishonest behavior cease immediately. Only then can we attempt to re-establish the respect for this newspaper that your actions may have irreparably harmed.