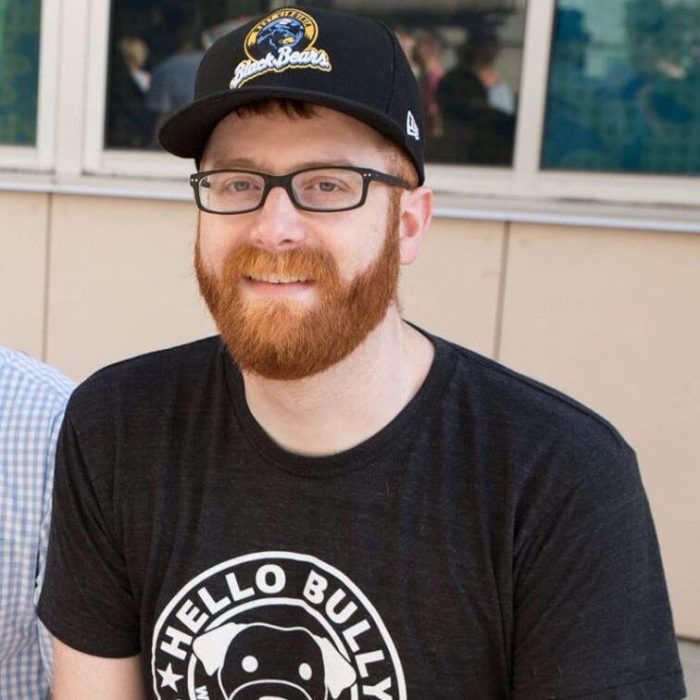 Pronouns: Any of the three sets – I’ve been in different contexts where each one made sense and felt right.

How do you describe your identity?  Queer, recovering Gay White Man™

Please describe your coming out experience. Where did you find support? What challenges did you face? I came out in college to some very supportive friends. My parents did not take so well at first, but I am proud of how they have grown and changed the last fifteen years.

How would you describe yourself NOW in terms of “being out”? I’m out to coworkers, out on social media, and wear my four moon baby t-shirts to some of Pittsburgh’s finest dive bars. What’s left?

Tell me about the first LGBTQ person whom you met. What impact did they have on your life? There was a guy one year older than me in high school that I felt an affinity towards even though we never spoke. Not an attraction, but an affinity – I knew we had something in common but I couldn’t place what it was. It was obvious though that he was having a lot more fun performing in musicals than I was trying to play sports. He showed me I didn’t have to follow a certain path to be happy (I still don’t like musicals though).

Past or present, favorite LGBTQ character or creator in television, film or literature? Please tell us why. How much time do you have?

I’m a huge “Roseanne” fan and a deep believer in the final episode, so [SPOILER ALERT] it’s interesting to revisit old episodes with the additional lens of Aunt Jackie as a lesbian.

I have to admit I owe a huge debt to Karen Walker from “Will & Grace.” Its such a slimy character on paper, but she helped me understand the lesbian continuum in real time while being loud and fearless and unapologetic. Also, Megan Mullaly made that show appointment viewing for my dad. It helped us bond in a low-stakes environment.

Shouts also to Craig Middlebrooks and his short but impactful run “Parks and Recreation.” As a tall, frazzled government worker myself, I can relate to the emotional outbursts a little too well…

How do you stay informed about LGBTQ issues? “The New Yorker,” 90.5 WESA, and some great podcasts including “Still Processing,” “Making Gay History,” and “Linoleum Knife.”

Describe your local or regional LGBTQ community. My immediate social circle is full of really talented queer kids who are rebuilding the world better than they found it each and every week. Throwing parties, releasing music, leading protests, teaching from pre-K to college graduate courses, donating thousands (thousands!!!) in drag tips to nonprofits, running nonprofits, starting nonprofits – they’re out there doing it.

Have you ever experienced discrimination based on your identity? Specifically, in a job setting, when applying for housing or while in public.  No

Tell us about your access to health care in Western PA. Has it been LGBTQ competent (or not?) When I was younger, I asked my family physician for the HPV vaccine. At the time, the FDA had not approved it for males. That doctor refused to give it to me off label. After pestering her more including referring to medical literature suggesting it for queer young men, she finally agreed to administer it but said I’d have to pay for it out of pocket since it was not covered by insurance. I did not have the money at the time to do that so I did not and I regret it.

Since then, I’ve had amazing experiences with Pittsburgh AIDS Task Force and Dr. Ho’s PrEP clinic in Oakland. My PCP is also queer. He’s incredibly talented as a diagnostician and easy to talk to. I’m in a very good place when it comes to health care.

Are there issues impacting your LGBTQ neighbors that aren’t visible or part of the local dialogue? A lot of issues are visible but their links to being queer might not be. Housing, food, and transit insecurity are rightfully being talked about in Pittsburgh, but I don’t know if white gay men understand how much they are related to racism, misogyny, and queer phobia. A lot of adults are still playing this horrendous game of catch-up because they were denied safety and security by parents or partners or the government earlier in life. We (white gay men) need to do a better job of ceding our privilege to address these things.

What would you like to see elected officials do to improve life for LGBTQ Pennsylvanians? Often times, the people most in need of support or really just fair treatment from the government are the least equippped to ask for it. It’s hard to go to a community meeting from 6pm – 8pm when you’re working two jobs or taking care of kids. When government officials need to be proactive and creative in finding ways to engage with those people on their terms and not just wait for the community to come to them.

Please share a lived experience, anecdote or fact about life as an LGBTQ person in your community. I have more to learn on these subjects than I have to teach. I will say though that we should embrace the word “queer.” It’s flexible, it’s open, it’s inclusive, it’s self-defining, it’s faster and less academic than the alphabet and it’s a lot more fun, too.

Beyond discrimination, what other barriers create challenges for your LGBTQ neighbors? I’m definitely that adult who started late in life and is still going through social growing pains that a lot of straight people got out of the way as teenagers. I’m still learning that I’m still learning. A little grace and patience goes a long way.

What LGBTQ friendly resources are available for your neighbors? Does Frank Ocean’s music count?

What is your greatest fear for the LGBTQ community in Western Pennsylvania?  That marriage equality was the end of the fight. There’s so much more to do.

What is your greatest hope for the LGBTQ community in Western Pennsylvania? I hope that Pittsburgh can be affordable. People younger than me and smarter than me need a good place to live and create. If we lose the housing market, we will lose them.


What can allies do to support your LGBTQ community? Listen, reflect, listen some more, donate money, and listen. The people who need your help don’t necessarily need your commentary or leadership or approval, but they could do a lot with $50. Relinquish that need for control, for 100% understanding, for centering yourself and just give resources.

How can gay men and lesbians support the bisexual, transgender and queer members of our community? Take them at their word. Let them define who they are and celebrate that instead of holding them up against your own experiences.

What motivated you to take part in this project? The interview with moon baby