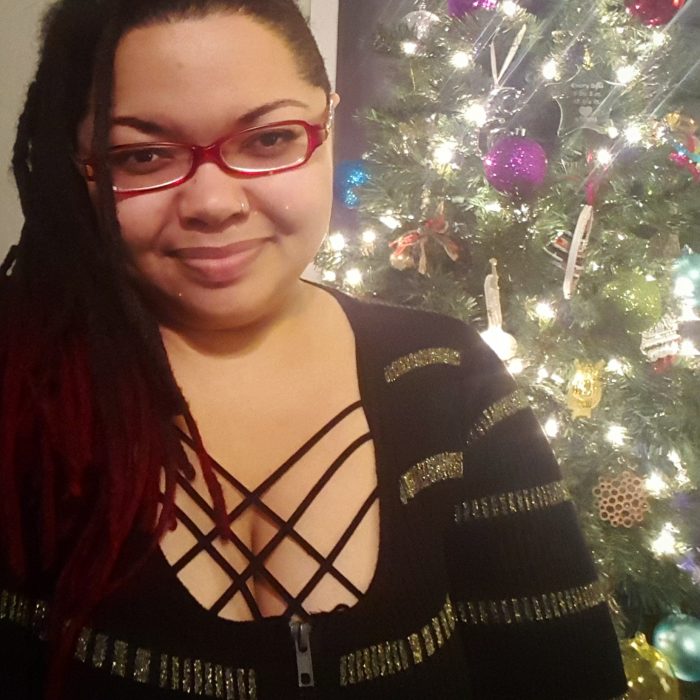 How do you describe your identity? I am a black, bisexual, queer, polyamorous woman and mother.

Please describe your coming out experience. Where did you find support? What challenges did you face? I came out to the “general public” in a long Facebook post after the Orlando tragedy in 2016. In the wake of that pain I read an article that said:

“So what do we do now? How do we mobilize in the face of hate — from others or from ourselves? No matter what the shooter’s sexuality might have been, we should take this opportunity to once again turn our attention to the dangers and devastation of the closet and band together to explode it once and for all. To anyone who can come out, I humbly suggest you do exactly that. To anyone who is out or loves someone who is or comes out, offer your support.”

I really took that to heart and decided it was time to tell people I am bisexual. I was fortunate to have the enthusiastic support of my friends. My family mostly stayed silent on the issue. My biggest challenge was the issue of bi erasure. My mom remarked that I can’t be bisexual, I’m married to a man! I told her that that was exactly why I needed to come out. All too often, bisexual people are an invisible part of the LGBTQ community. As a cisgender, feminine-presenting woman in a straight marriage, my queerness is not always immediately evident to folks who don’t know me. This can be frustrating at times, but I’m aware it also offers me a level of privilege that others do not enjoy. I grew up often times feeling not “black enough,” and now sometimes feeling not “queer enough.” But I consider myself fortunate that these are usually the largest challenges I face.

How would you describe yourself NOW in terms of “being out”? I am very open now about my identity, except around my family to some extent. I fly a rainbow flag in the front window of my house. Because I’m married to a man people often make assumptions about my identity, but I’m quick to clarify my identity whenever it comes up. I’m very vocal about bi erasure.

Tell me about the first LGBTQ person whom you met. What impact did they have on your life? When I was a young teenager an older teenage guy moved into the home of a good friend of mine in my neighborhood. I gathered that he was staying there due to struggles with his own family which I now presume were due to his sexuality. We all “knew” he was gay but it wasn’t something that anyone discussed. He was totally different than anyone I had ever known. I couldn’t put my finger on it at the time but I definitely felt a kinship with him. He encouraged me to embrace my creative side which made a big difference for me over the course of my life.

Past or present, favorite LGBTQ character or creator in television, film or literature? Please tell us why. Right now I am incredibly proud of Lena Waithe who is queer and also the first black woman nominated for an Emmy for comedy writing for Master of None. We desperately need more voices like hers creating media. I’m also excited about creators like Rebecca Sugar of Steven Universe and Tikva Wolf of Kimchi Cuddles who are bringing queer stories to different types of media.

Describe your geographical community. I live in a pretty blue collar, lower to middle class neighborhood just outside the city. The population is a bit older. I believe it is racially about even between white and black, but somewhat segregated and I witness a lot of microagressions and subtle institutional racism. I only know of a small handful of other queer folks in this neighborhood. It seems to skew liberal but also isn’t overtly welcoming…I don’t see a lot of “Coexist” bumper stickers or anything like that. I don’t feel unsafe but I don’t feel totally comfortable either. I tend to spend most of my time in the city.

Describe your local or regional LGBTQ community. I feel that Pittsburgh’s LGBTQ community is active but splintered. So many of our queer businesses and organizations are not as welcoming to POC, women, and trans folks as they would like to think they are. This means that POC, women, and trans folks have to spend too much energy fighting for a place in our own community rather than working on addressing greater issues of oppression outside the community. Too many gay, cis, white men feel like they have “made it” when it comes to equality and don’t need to reach back to help the rest of the community and make sure we are all safe.

Have you ever experienced discrimination based on your identity? Specifically, in a job setting, when applying for housing or while in public.  Most of the discrimination I’ve faced has been due to my race and class…When I was pregnant my husband was laid off from his job and we relied on food stamps for a time period; I remember feeling pretty shamed with looks and comments when using them at Large Local Grocery Chain.

Tell us about your access to health care in Western PA. Has it been LGBTQ competent (or not?) My PCP is through Metro Community Health Center, which I know to be incredibly welcoming and competent with LGBTQ services.

Are there issues impacting your LGBTQ neighbors that aren’t visible or part of the local dialogue? Housing stability is a significant issue for my queer friends. I see so many young queer people couch surfing or moving from place to place every few months, with reasons ranging from lack of employment to mental health issues to transportation difficulties to mistreatment or mismanagement from landlords.

What would you like to see elected officials do to improve life for LGBTQ Pennsylvanians? Anti-discrimination laws need to be a top priority, especially now that LGBTQ rights are under attack by our federal government. I hope Pennsylvania will take a progressive lead in providing equal protection for LGBTQ residents. Marriage equality is great but it means nothing if you’re still forced to remain in the closet to protect your job or your home.

Please share a lived experience, anecdote or fact about life as an LGBTQ person in your community. Homophobia in the black community, while perhaps not more prevalent than in other communities, is a lot more hurtful to me as a person of color. I can’t stand to see POC using the very same arguments that were used to keep black people from marrying/working/living their lives freely used against LGBTQ people today.

Beyond discrimination, what other barriers create challenges for your LGBTQ neighbors? Accessibility is an issue. So many LGBTQ targeted events are held at venues that are not accessible. Our city has old buildings and most cannot afford to modify their space, or aren’t even aware of the issue to begin with. I’m hoping more community spaces will open that are fully accessible, and that the people planning events will make accessibility a goal.

What LGBTQ friendly resources are available for your neighbors? I’ve been a member of Renaissance City Choir since 2010 and they are like a second family to me. I’m very proud to serve on RCC’s board to help support the organization. Making music in this supportive and inspiring environment has been very empowering for me.

I’m also glad to see local meetup groups for LGBTQ folks, like the TransPride potlucks and pool parties; Pittsburgh Bisexual Community meetups and game nights; Pittsburgh Rainbow Families which I help to organize; Queer Munch. Being able to socialize in a supportive environment with likeminded people is so important to feeling empowered and comfortable in your own skin.

What is your greatest fear for the LGBTQ community in Western Pennsylvania?  That we will continue to become more and more divided within our community and therefore unable to address oppression coming from outside the community.

What is your greatest hope for the LGBTQ community in Western Pennsylvania? That we can turn the state blue again and grasp a firm hold on progress.


What can allies do to support your LGBTQ community? Listen. Resist the urge to be defensive. Support the organizations that provide services to the LGBTQ community. Write, call, email your legislators. Vote. Use your privilege to confront discrimination when you see it.

How can gay men and lesbians support the bisexual, transgender and queer members of our community? Don’t be so quick to dismiss the struggles of the trans community and queer people of color. Don’t dismiss or question the sexuality of bi/pan people. Don’t tell those with less privilege that they should “get over” something or stop “being so sensitive.” When organizing events or services, ask yourself: Is this accessible to the trans community? to people of color? to the disabled? to those living in poverty? to those who are homeless?

What motivated you to take part in this project? I wanted to support the project and also add another voice from a person of color.

Finally, what question should I have asked? Please also share your answer. What resources do we need in the city to promote inclusion? I would love to see a comprehensive database where Pittsburghers can find local businesses and organizations to support that are owned/operated by or serve POC or LGBTQ or disabled people.