Just some random Easter memories. What comes to your mind this time of year?

As children, we had designated baskets. Mine was a big wicker style with a floppy yellow bow. My brother had an Easter cart that my father had used in his childhood. Options to hide were somewhat limited in our ranch style home, but it was still part of the fun. Typically, we both received a rabbit, a large egg and lots of jelly beans and chocolate tin foil wrapped eggs. When we were much younger, we’d receive a stuffed animal of some type. Then we were forced into nice clothes, taken to Mass and then home again for a pretty traditional dinner of ham, potatoes, etc. Most of my relatives were not practicing Christians so it was typically just us. There were no bigger traditions that I can remember.

When I was a pre-teen, I was required to be the ‘Easter Bunny’ at my aunt and uncle’s restaurant in Clairton, PA. It was torture. Paid torture, but still. Giant paper mache head. Greeting kids who were either bored silly or terrified of my fake grin. Or disappointed that I did not have anything related to candy. The cashier rigged up a multi layer straw so I could drink through the head, but I had to eat my lunch and dinner sitting in the stairway so I wouldn’t freak out a kid who caught Easter Bunny headless and eating a burger. Ugghhhh.

Enjoy this blog post? Support our work with a donation

In college, my friend’s great-aunt came to visit for Easter and helped us to prepare an actual ham in a third friend’s apartment. We had no idea what to do with cloves so we covered it entirely with over 2 dozen cloves. We ended up with fragrant ham and cottage cheese dinner. But it was fun. The woman who hosted us made us contribute to her laundry fund because we used up all of her towels during dinner prep. That was fair enough.

During my young adult life, I was pretty religious and really threw myself into the Lent/Easter experiences. One year in college, I was asked to have my feet washed by the campus priest and it was pretty intense. Now I realize it was the meaning I imbued combined with the truth that I was supposed to accept – I had value and deserved to have my feet washed. I didn’t think that was true back then.

I do remember as a youth that I believed in a literal interpretation of my faith – a massive fail on the part of CCD for what its worth. So even though Easter moved around the calendar, I honestly thought that at 3 PM on Good Friday – we relived the Crucifixion. I held fast to that sincere little belief and felt great grief. I fasted, I cried when we had to say “crucify him!” and I took it all so, so seriously.

In my adult life, Easter is pretty routine. One year, we took our niece to an Easter egg hunt, but found that the anxiety over the big kids taking all of the eggs from the little kids was too irritating for us to make a repeat visit. We typically have dinner with Ledcat’s mother. We kick off the holiday with our usual special breakfast treat of blueberry muffins from The Priory Fine Pastries.

Several years ago, we bought tickets to see Green Day on Easter Sunday which felt very revolutionary of us. We skipped family stuff to have breakfast at Waffles Incaffeinated and then basically sat around all day waiting to go to the concert. It was a fun, but sort of weird experience.

Sometimes Ledcat’s family opts for dinner/brunch out at a restaurant and I bow out. In addition to flashbacks to my Easter Bunny days, I can’t stand to wait in line for an overpriced meal surrounded by chocolate hyped children and twice-a-year Catholics tugging at their dress clothes. So one year, I stayed home and watched two seasons of Buffy while they dined out. That wasn’t bad.

I’m more excited about the Fish Fry Friday tradition these days. But this year, we’ll head up to Ledcat’s hometown so the kids can enjoy an Easter egg hunt (minus the bully kids) and a nice meal. No expectations of drama because we all agree politically. It is basically a big venting fest with food and the occasional rotation of who is engaging the kids. I count it as a holiday win if we can drive home without passing a Confederate flag.

Laura’s mother will purchase us an egg to share, probably peanut butter which we both like. The kids will allow us to have one jelly bean 🙂 and that’s it.  We’ll sort of talk about dying eggs, but then just not get around to it.

And we’ll be off toward Memorial Day! 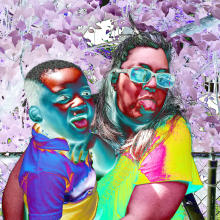 A History of Aunts on the 4th of July

#LGBTQFamiliesDay – Being the Adult I Needed in My Own Childhood