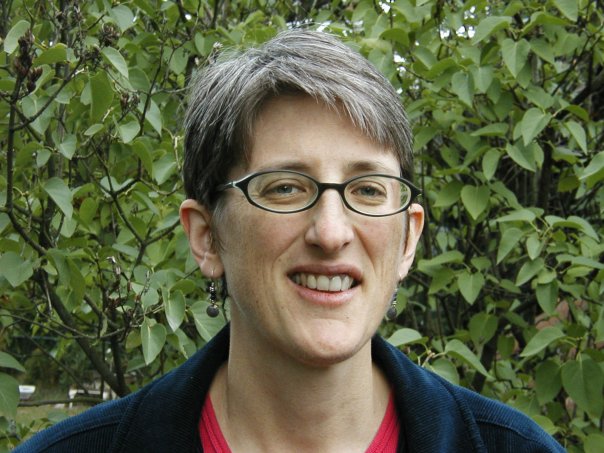 How do you describe your identity? Cisgender, lesbian, slightly gender nonconfroming

Please describe your coming out experience. Where did you find support? What challenges did you face? My coming out was extremely difficult due to my strong religious upbringing which to this day has created barriers between me and my father and two siblings, and some of my childhood friends. I found important support from others both gay and non-gay who were raised in the same church but also questioned its positions on sexuality. Also a few friends I had made outside my church and a social worker therapist. And years later I had to revisit my backlog of unresolved internal conflicts with five years of psychotherapy.

How would you describe yourself NOW in terms of “being out”? I am 98% fully out. I introduce my wife as such in most every setting, though it is hard to feel 100% comfortable still in a few settings.

Tell me about the first LGBTQ person whom you met. What impact did they have on your life? The first LGBTQ person I met was a friend of my Mom’s who was about a 15 years older than me. I did not know she was a lesbian until much later. I just new I thought she was very strong and cool – she played the guitar and spoke very assertively. She saw me as a person. She later said she was not surprised when I came out.

Past or present, favorite LGBTQ character or creator in television, film or literature? Please tell us why. Can I bend the rules and say Rachel Maddow – she is brilliant and brings such depth of history to current issues. There are so few really wonderful characters for us. Ellen’s sitcom I found vaguely annoying until her character came out. That episode and the season following dealt with coming out and relationship and communication issues for lesbians with intelligence and humor rarely found in sitcoms.

How do you stay informed about LGBTQ issues? I support and follow: the National Center for Lesbian Rights, Lambda Legal, The National Gay and Lesbian Task Force, Persad, Equality PA, etc

Describe your geographical community. I live in Wilkinsburg, right next to Pittsburgh, and my neighbors on my street are all great. I feel fairly safe and welcome.

Describe your local or regional LGBTQ community. Pittsburgh is a pretty friendly place in many ways. We have wonderful resources like Persad, Dreams of Hope, etc. But we still struggle with racial and other divisions such as the recent controversy with the Delta Foundation decision making and less than diverse leadership.

Have you ever experienced discrimination based on your identity? Specifically, in a job setting, when applying for housing or while in public.  I get annoyed when called “sir” as it reflects an ignorance of the variety of expressions and styles of being a woman. And I am not really butch – just slender with short hair. It happens. My wife got called “Son” recently but that was in central PA.

Tell us about your access to health care in Western PA. Has it been LGBTQ competent (or not?) I have have had great experiences starting with Metro Family Health and including other providers in the area.

Are there issues impacting your LGBTQ neighbors that aren’t visible or part of the local dialogue? I know youth still struggle and this issue can always be elevated.

What would you like to see elected officials do to improve life for LGBTQ Pennsylvanians? Pass a statewide non-discrimination bill. Come on, it’s way past time!

Please share a lived experience, anecdote or fact about life as an LGBTQ person in your community. Just would like people to not assume heterosexuality. It doesn’t happen that often, but when I get asked by a client or a service provider about “my husband” or “my kids” it feels awkward – like why do you automatically assume that?

Beyond discrimination, what other barriers create challenges for your LGBTQ neighbors? I see people struggle financially.

What is your greatest fear for the LGBTQ community in Western Pennsylvania? That it becomes more fragmented as we become at the same time more mainstreamed but also see backlash against trans folks and other minorities within our minority.

What is your greatest hope for the LGBTQ community in Western Pennsylvania?  That we become more unified thanks to the work of the great organizations and individuals that we do have


What can allies do to support your LGBTQ community? Share our issues with others, support financially

How can gay men and lesbians support the bisexual, transgender and queer members of our community? Listen, think outside our own category.

What motivated you to take part in this project? Every voice adds to our impact.

Finally, what question should I have asked? Please also share your answer. Maybe something about ageism and how it is present in our community.