Welcome back to Fish Fry Fridays, 2017 Edition! This is the final regular Friday of Lent edition. While we will participate in a fish fry on Good Friday, the options are much more limited.

For several years, our fish fry options have been limited by geography – Laura works until 5 PM and Friday rush hour traffic constrains our travel to a certain part of town, mostly north. But we’ve both wanted to travel out to the Steel Valley to try some of the region renowned fries.  If you’ve ever tried to leave Downtown along Carson Street (or the Parkway) on a Friday during rush hour in the rain … bless your heart.

But we wanted really good pierogi. 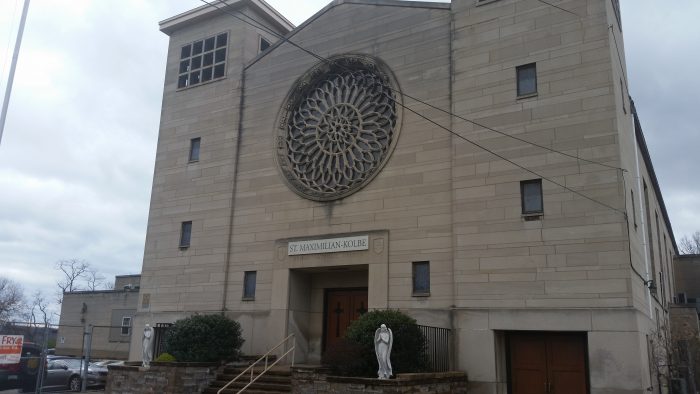 This week, Laura had a day off so we headed to that part of town earlier in the afternoon to run some errands and then headed up into Homestead for an early dinner. While I wouldn’t say it was easy to find because it is tucked back on an extension street, GPS did not let us down. The church is HUGE and has an interesting history.  They had put up very large banners and signs in the neighborhood that were helpful. There was a modest parking lot and lots of street parking which we opted to use. 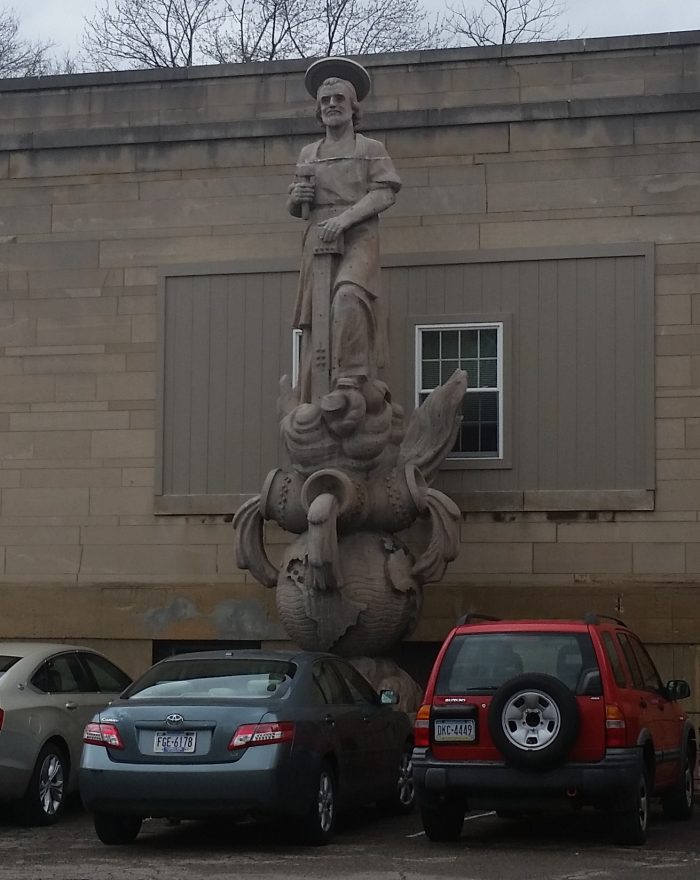 We were immediately struck by the enormous statue – but it is not St. Maximilian Kolbe. It is St. Joseph the Worker first erected in 1966 in one of the Slovak Catholic churches that eventually formed St. Maximilian. He represented and honored the lives of the working people – look at the molten steel and flames. Interesting fact – this statue was sculpted by the same man who sculpted the Honus Wagner statue at PNC Park (h/t Ruth E Hendricks photography.)

The entrance was accessible – hurrah! Signage directed people to the ‘take out’ and ‘eat in’ sections which was very helpful. Two women waited for us at the order table. They weren’t exactly pleasant and warm, but they were fine and efficient. I saw how they interacted with actual parishioners. The difference is palpable and one crucial reasons these churches continue to miss opportunities to engage new potential parishioners.

So, the menu was incredibly diverse and very clear on things like ‘no substitutions’ and the surcharge for a credit card use. We had previously read over the options and decided that we would share several items – one baked fish dinner with mandatory sides of fries and coleslaw, one small order of pierogies and one small order of macaroni and cheese. Plus, two drinks. It totaled $16. She handed us our slip and told us to go into the dining space.

That’s where the community engagement skyrocketed. People were really nice and helpful and welcoming, offering us everything from an extra plate to a complimentary roll and more. We handed the woman our slip and she grabbed a plastic tray and pulled our items from their various heating plates and coolers and such in a matter of moments.

I headed over to find a seat among the many tables. This space is used as a banquet facility so it was pretty nice, no folding chairs. The tables were set with plastic ware (uggghhh) but the chairs were very comfy. There was a big area devoted to a 50/50 and raffle items featuring some pretty big ticket things like a 43 inch television. Interestingly, no one asked us to buy a ticket (missed opportunity.) 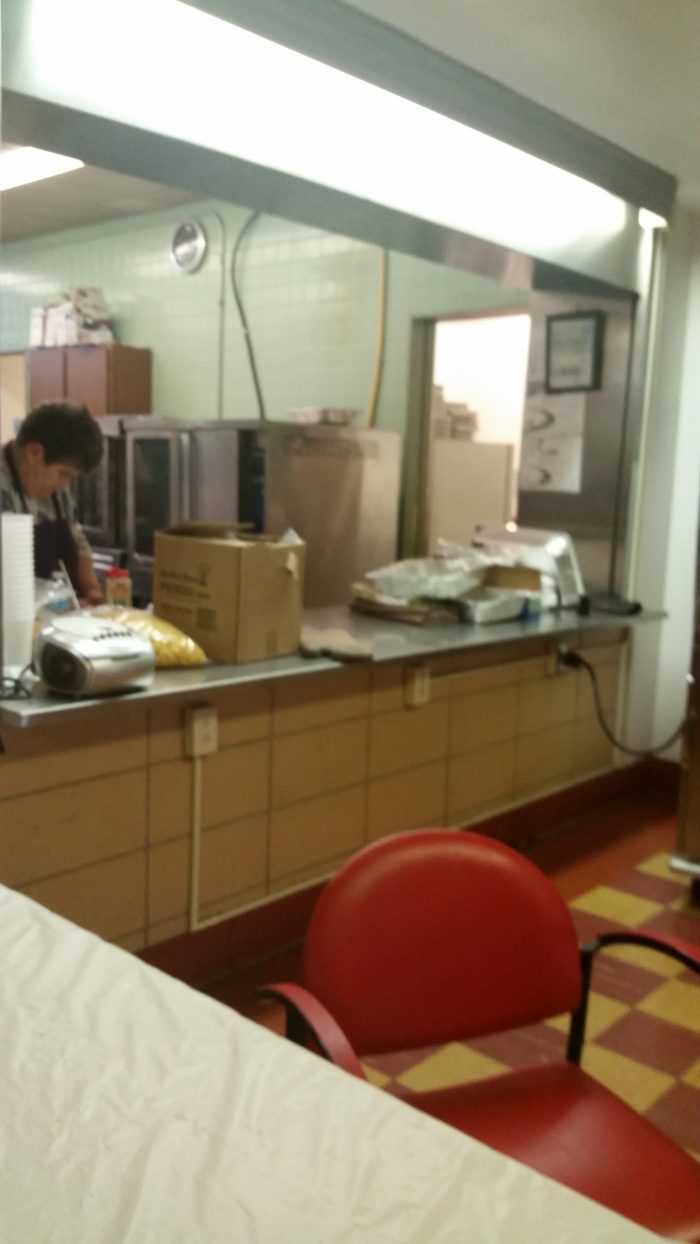 Laura went up to the mini-bar section to get our drinks and returned bearing two oversized red solo cups with gripping ridges and the wry comment “they don’t skimp on ice!” But I discovered that the cup was a good fit for me with my hand tremors. It comes from Costco so if any of my readers are members and willing to pick up some of these cups for me, let me know!

The food portions were huge. We saw fried sandwiches that easily extended past a 12 inch hoagie roll. Our piece of basked fish was easily three portions – we both had some and took the rest home for the kitties. The fish was good, tender and simple. No strange sauces, just a little butter. I have to say that the fries were actually really good, too.

The macaroni and cheese was good. It was a solid contender in the fish fry fridays. The sauce was creamy, not tasting of orange powered cheese. The portion was nice (and came in a container we could take home.) The coleslaw was also very good – it had more of the vinegary taste and less of the mayo. That’s a nice compliment to fish and all of the starchy sides.

The pierogi were magnificent. We had three large pockets covered in carmelized onions and warm butter. It was an incredible moment of deliciousness. We often buy authentic pierogi from a little Polish store in the Strip or at Farmer’s Market, but we can’t carmelize to save our lives. So we savored every bite. If the line hadn’t been so long, I would have purchased a dozen to go.

The menu was huge – fish, shrimp, pastas, salads, croissants with multiple choices of fillings, desserts and more. This is definitely the place to take a group if you have picky eaters.

The crowd was growing as we ate, but no one sat at our table. The busser came over and talked with us for quite awhile; he was very nice and helpful. The ‘Take Out’ section was bustling. The crowd skewed to the older side, but there were no ‘Make America Great Again’ hats which I count as a blessing. We only saw one Trump bumper sticker in the parking lot (and no Confederate flags.) I grew up next to this community in West Mifflin and spent  lot of time there. I would live there if I hadn’t moved to the City.

In terms of engagement, I think it was overall pretty good. We certainly didn’t feel awkward or unwelcome. We didn’t receive information about the church and its range of services which include a banquet hall rental so that would be smart to share. We both laughed at the old school bathroom which was super clean, painted a bright tangerine color – TANGERINE – and featured an array of sample products like eyeglass cleaner, sprays, lotions – but no tampons or pads. Hmmm. Maybe they were hidden under the table skirt? I didn’t have time to look. 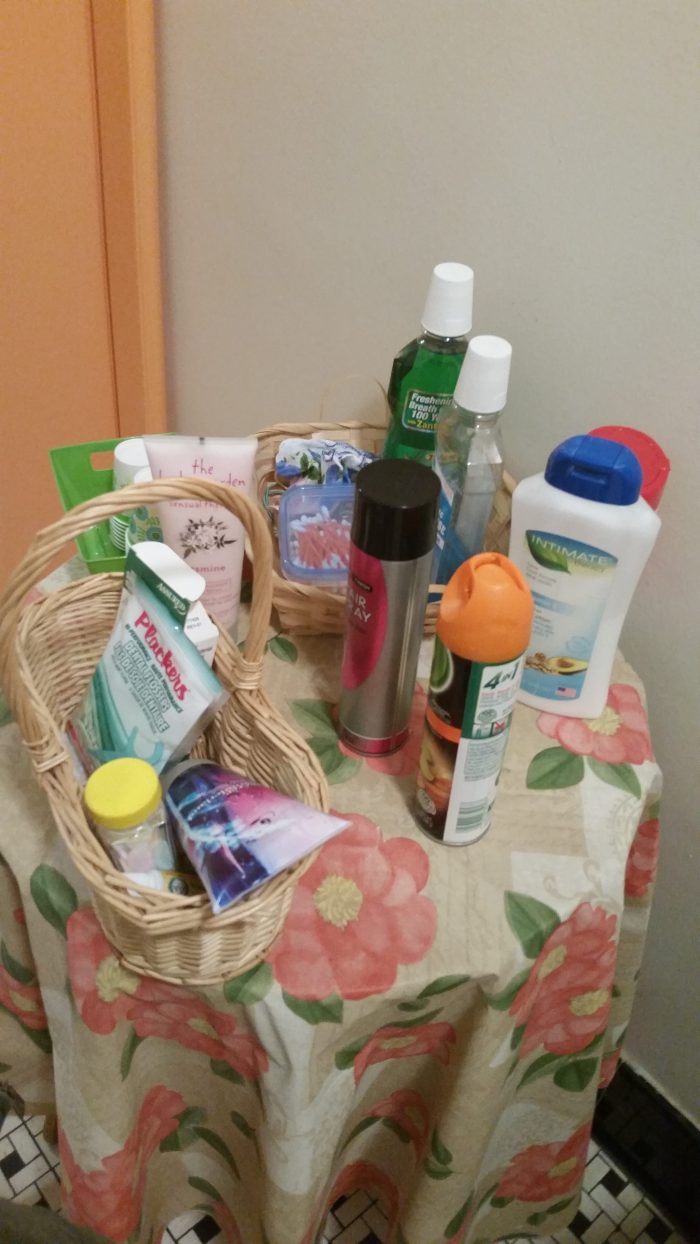 The eco-friendly issues were pretty consistent with other parishes. Lots of styrofoam, disposable tableware and no sign of recycling. That could be taken place behind the scenes, but its just not evident as a Catholic value. This continues to gnaw at me. I would be willing to pay an extra $1-2 to subsidize compostable disposable items and active recycling of the cans and cups, etc. But more of this in my wrap up post at the end of the season.

This is a fish fry I would visit again in future years. The banquet facilities lend it the capacity to do a brisk business and the large menu is appealing.  Proximity to the Waterfront makes it desirable to incorporate errands, a movie, etc.

So this is the final regular Friday in Lent. Next week is Good Friday so our options shift quite a bit. We are mulling over a return to the Northside Elks or trying to fit in another church. Let us know if you have a favorite!