Welcome back to Fish Fry Fridays, 2017 Edition! Hard to believe Lent is almost over,

We skipped a week because I was struggling with my mental health. But this week, I was determined to make it happen. Our schedule was a challenge because (look out – name drop!) Laura had scheduled a telephone interview with Emily Saliers of the The Indigo Girls at 5:55 Friday afternoon. So I had to find a fish fry that was open a little later and still accessible from the Northside.

I used the official Google map and settled on St. Teresa because it was open until 7:30 PM (!!!!) and seemingly nearby in the Ross Township/McCandless area.

After Laura wrapped up her phone call, we ran out the door. I thought I was being smart by saving time with an intra-Northside shortcut off Brighton Road instead of the under construction Route 65. Bad call, Sue. The dang bluetooth GPS connection was out of alignment between my phone and the car radio so we missed our turn. It took nearly 35 minutes to get there, leaving us both a little cranky and feeling some sort of urgency about fish supplies. When we rolled into the parking lot, it was PACKED with suburban size SUVs and large grandparent cars. Laura dropped me at the front and went to find a parking space.

The church is easy to see from Perry Highway, but not so easy to actually find. Lots of left turns that feel like you are turning into a parking lot. But that’s life in the suburbs.

The church website has excellent details on where to find the fish fry, where to park, etc. Signage could be better for the newbies like us, but given how packed the space was – perhaps newbies aren’t a priority.

I have to give this group of folks two thumbs up for their infrastructure and organization. They had signage, ropes, people pointing the right line, name tags, the servers even had aprons embroidered with their first names. They were efficient, friendly and courteous. In two shakes of a lambs tail, I was giving my order to Mary Ellen. Laura didn’t want the complimentary soup so Mary Ellen insisted on giving her an extra side dish.

The menu was pretty typical – adult meals with a fish entree (fried, baked or friend shrimp), a soup and choice of two sides, plus bread and 12 ounce cup of a beverage. No pierogies. And they ran out of haluski before we arrived. Also, they served beer and wine by donation which is a bit atypical. 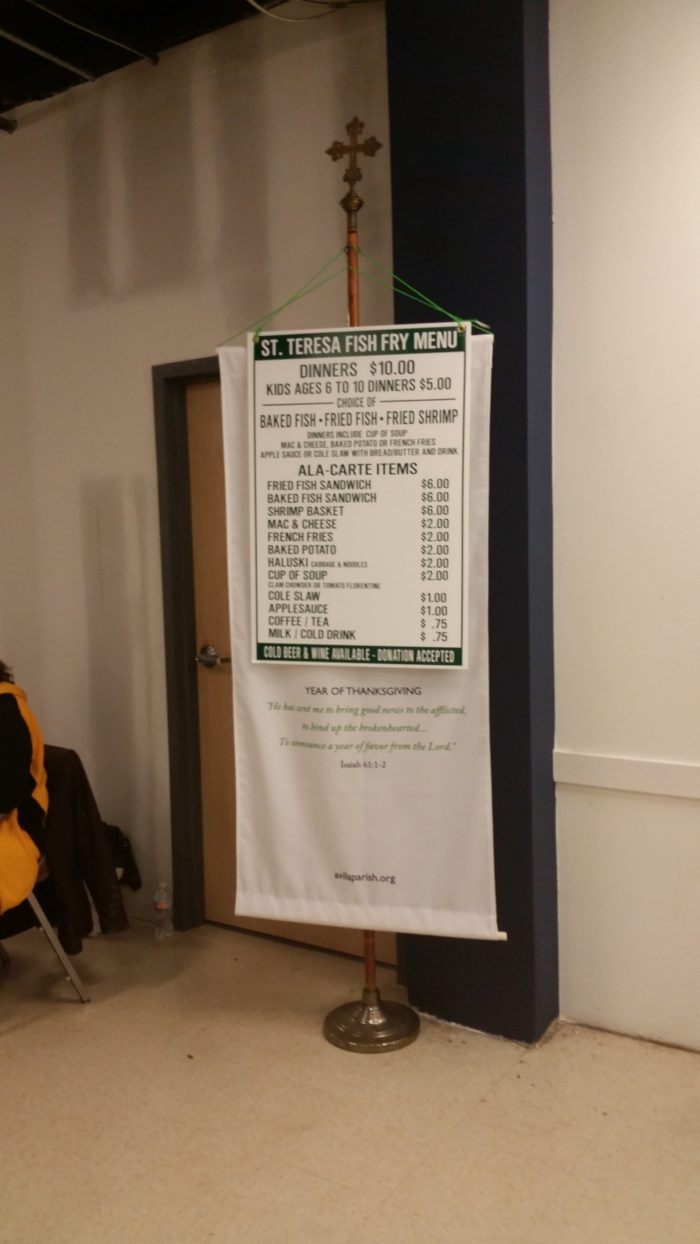 I ordered, paid and was sent with my slips to another line to be seated. There a man who looked a lot like Brian O’Neill told me all about his wife attending high school at this parish. I made small talk about how being seated reduced that throwback feeling to high school when you searched for somewhere to sit. He gave me sympathetic sad face, rubbed my arm and assured me that I was wanted there. It was nice and a bit odd at the same time. Then it was my turn to be seated just as Ledcat finally made her way into the building. 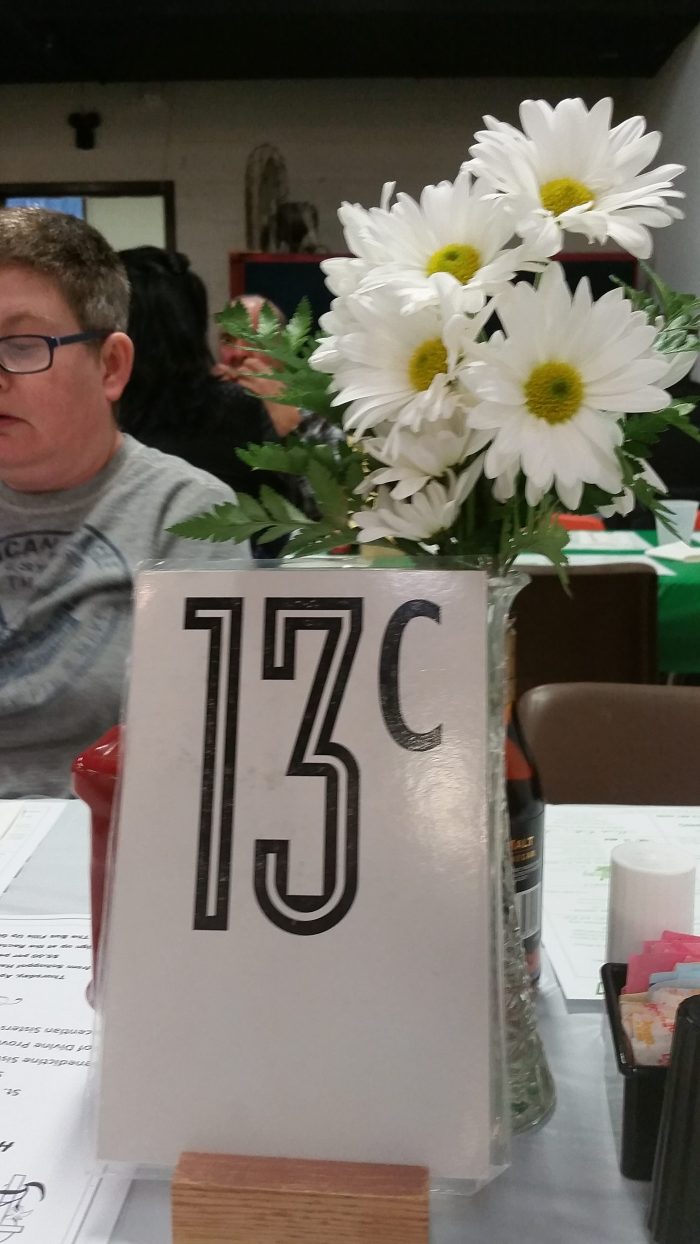 We ended up at table 13 – ha! Again, the servers were super nice and organized and efficient. They made small talk with us. It was mostly adults – I didn’t see youth involved, but I wonder if the availability of alcohol made that impossible? Our tablemates were nice enough, but talked a lot about gum disease which was a bit unappetizing.

Laura ordered baked fish and the smorgasborg of sides dishes including mac & cheese, coleslaw and applesauce. 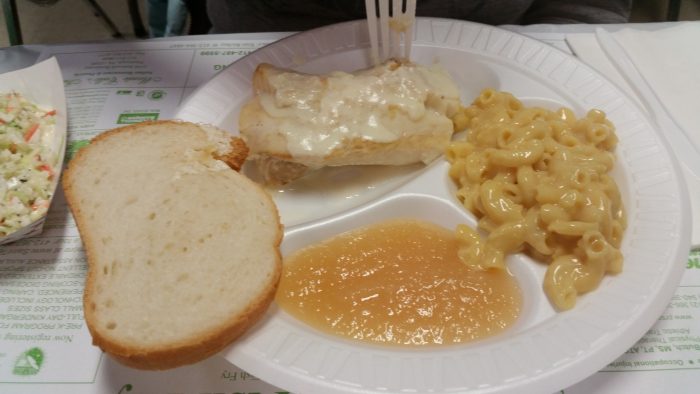 I had the fried shrimp with mac & cheese and coleslaw. I also had the clam chowder. And we both received a slice of bread and one butter. You know that you are back in the suburbs when bread is stacked on your placemat instead of a bread plate. It is just what we do. 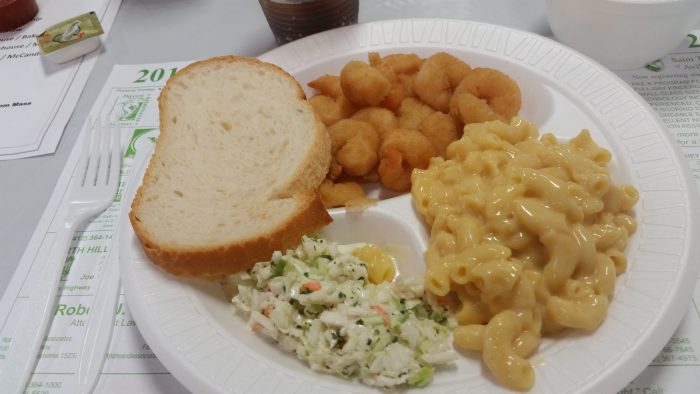 So the food. It was not great. The coleslaw was the best thing and it was pretty good. But you can’t make a meal of coleslaw. Laura’s fish was covered in an unidentified white sauce that she disliked and so was only okay once she piled on the tartar sauce to disguise the taste. The portion was fine. The fried shrimp were not quite fried enough. It was a nice portion as well, but just lackluster. The mac & cheese was actually awful. Neither of us could eat it because it made our stomachs hurt. There had to be some really intense atypical cheese preservative in it to have that immediate an impact.

The space is very nice if tightly packed. A lot of people brought the megastrollers with them which made the aisles an obstacle course. The tables were set with placemats filled with sponsor information and upcoming events which was good. It was a pleasant space, but the access to Verizon wireless was weak and that always freaks me out because I fear the lights suddenly dimming and my being subjected to a conversion lecture. 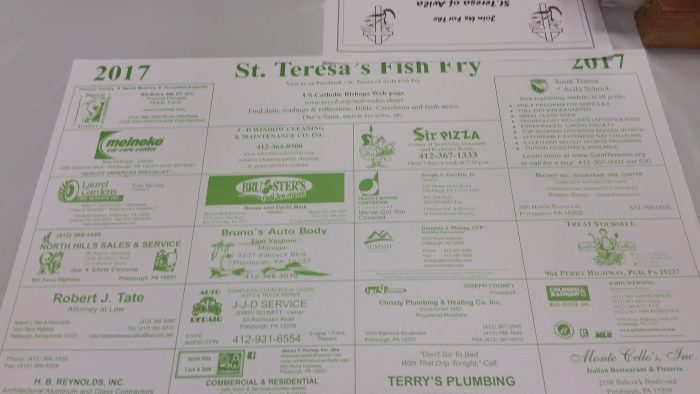 In terms of eco-issues/stewardship, I’m afraid it was all poor. Styrofoam everything, everything portioned out in small plastic containers, plastic cups, etc. I saw not a hint of environmental stewardship anywhere. That’s disappointing. Again, I think the youth should be proactive in this regard. But I have to say that since we were being served from behind the scenes, perhaps that all took place out of sight.

Keeping in mind that this is a fundraiser, so you should go to support the cause you value. But I wouldn’t suggest going out of your way. In general I think that the fish fries closer to the heart of Pittsburgh and the heart of the Catholic communities tend to be a bit more authentic and tasty. The fries associated with schools tend to be a bit more organized, but not always so tasty. And the fries in the suburbs are convenient, but perhaps a bit more suburban than you might like.

On that note, please take note of one of our very favorite annual fish fries next Friday in the Hill District sponsored by Judah Fellowship. 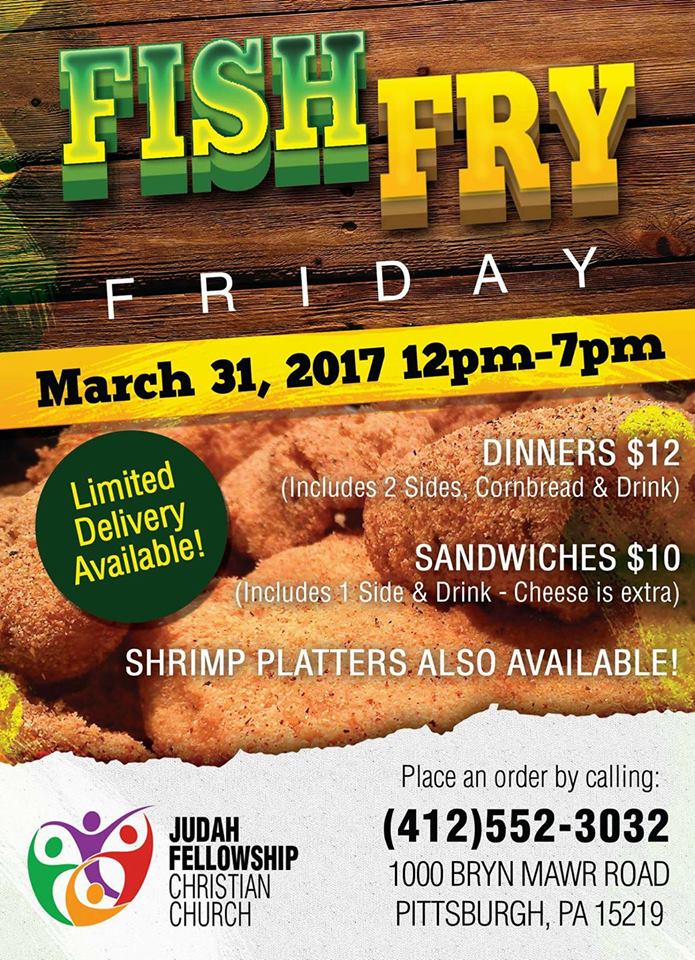