Welcome back to Fish Fry Fridays, 2017 Edition! It is going to be a great spring filled with fish, fish and some occasional shrimp.

We are both coping with colds this particular Friday so we opted for an old stand by and returned to Assumption for what we knew would be a pretty good meal. (Read our previous reviews of Assumption here: 2014 and 2016) We went early because we both skipped lunch and wanted to just eat, get back home and settle in to watch Rachel Maddow. Ledcat was off work so she drove us up Route 65 toward Bellevue, a nearby suburb of Pittsburgh.

Assumption is pretty easy to find from the main drag in Bellevue and has a lovely large public parking lot (with meters until 6 pm so beware) across the street. We found a spot and walked through a very bitter wind to the church. I stopped to take some photos because it really is a lovely building, but Ledcat abandoned me for the warmth of the building. The fish fry is toward the back in the lower portion of the building. There is no indication that it is accessible and I keep forgetting to ask.

We had a special encounter at this fish fry – the priests. We ran into Father at the entrance to the hall and he stepped into line behind us. Then were seated next to the other Father and the first Father joined us. With his sister. Got that?

What made me smile was how almost every person in that room gravitated to Father and that he treated them all with a degree of affection and gruffness that would make any nun proud. We also had a good laugh as Father surreptitiously poured a white substance from a plastic container into a cup, added salt and pepper and drank heartily. What could it be? Turned out it was buttermilk! He enjoys buttermilk with his fish, he said. What a hoot! We also overheard a bit of gossip and news about the parish that made zero sense to us, but was amusing table talk.

Backing up, we entered the hall where signage directed us to the takeout line and the eat-in line. As seasoned fish friers, we had a general sense of what we wanted, but we conferred to decide who would get what. The line moved quickly and efficiently as people moved folks to the next available ‘cashier.’ We ordered, paid and were whisked away to be seated lickety split.  Assumption uses students from their parish school to work at the event which makes a huge difference. The kids were friendly, even eager to help. They were attired in all sorts of parish tee shirts promoting their various sporting teams and other groups.

Laura decided to have a fish sandwich with a side of pierogies and applesauce. I opted for the fried fish with macaroni and coleslaw as my sides. Beverages were included in the price with the choices of iced tea, lemonade, coffee, hot tea and water. I had water and Laura had lemonade. Each dinner was $10 with two sides and beverages. That’s a good deal when you factor in the portions. We also spent $2 at the bake sale. Oh my goodness, that chocolate cake was incredible. 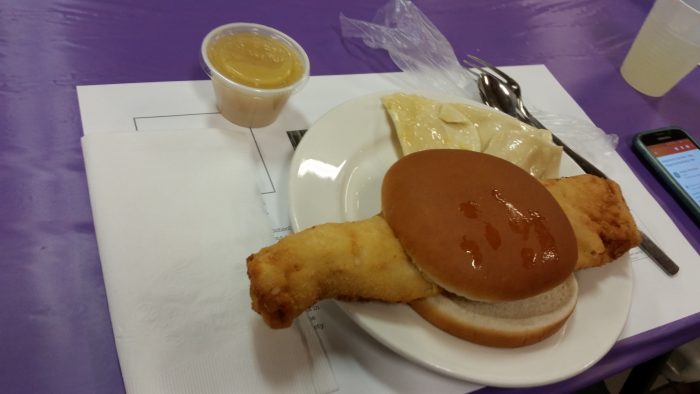 The shrimp was fine, nothing spectacular but a good portion and perfectly cooked. The fish was a huge piece served Pittsburgh style on a round bun. But we had thought ahead, knowing that our little cancer stricken cat would enjoy the fish – we brought our own takeout container. Laura trimmed the fish down to what she could reasonably eat and we tucked away the other pieces. In my purse. Like official middle-aged ladies. The fish was moist and tender with a light breading.

A side equals three pierogies which was a solid amount. They were lightly sautéed with a hint of onion and quite tasty. They didn’t look homemade, but they were good. Not drive to the Polish grocery store in the Strip good, but pretty good. The macaroni and cheese was just meh. It was suspiciously more orange this year and a bit soupy. It wasn’t awful, but I will skip next time.

The coleslaw deserves its own paragraph. It was sublime. A friend told us that a caterer who belongs to the church provides the slaw and it is magnificent – hand sliced cabbage, distinct and crisp flavor. It really made the meal pop. I’m imaging how to use the slaw in lieu of pesto or as a dressing on the fish itself. 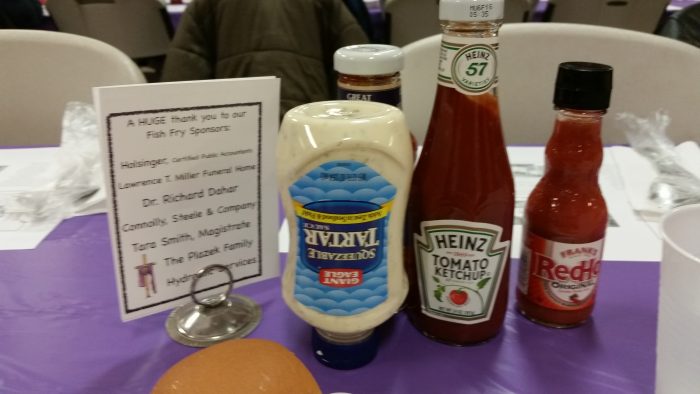 In terms of engagement, the tables were set with promotional placemats outlining information about the church community. The volunteers were pretty outgoing and helpful. There was definitely a hustle going on. The room was decorated with the stations of the cross featuring coloring papers presumably done by the students. I found the first station (‘Jesus is Condemned to Death’) also decorated with colorful fish, suggesting to me a fusion of symbolism with the literal historical interpretations. And it was cute. 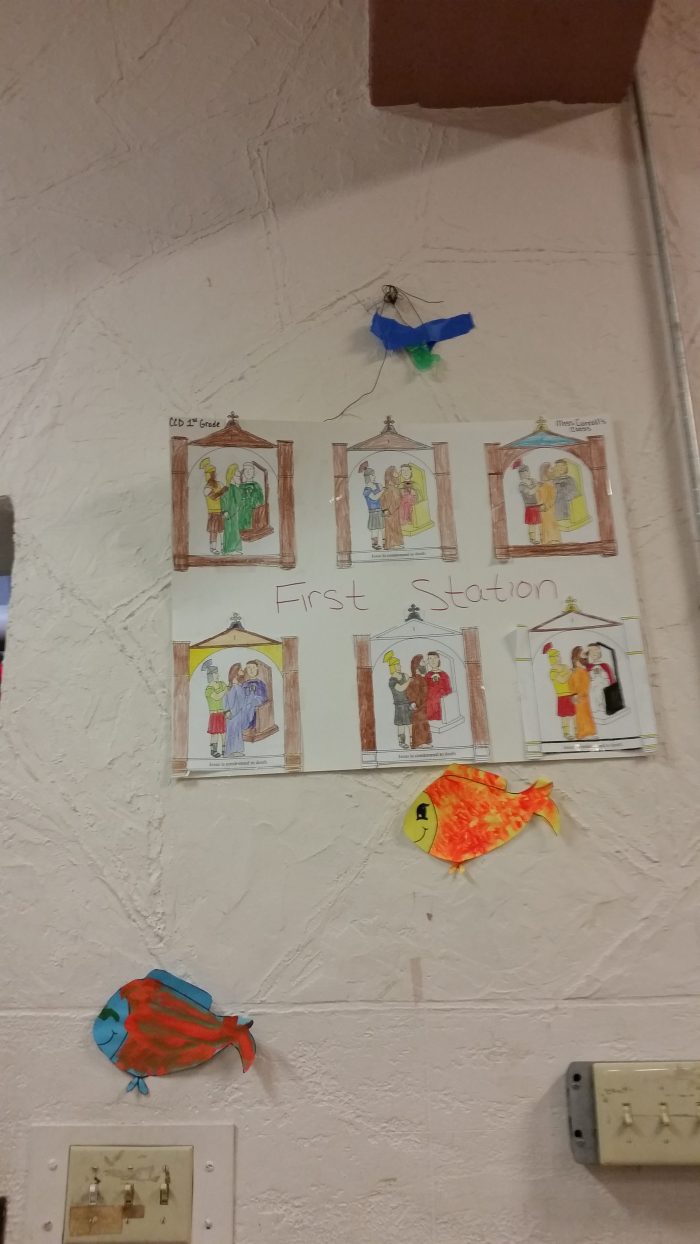 The ecofactors of this fry include serving food on reusable plates with actual tableware even though the cups are disposable plastic. No evidence of recycling in the room, but as the tables were cleared by volunteers, that could happen behind the scenes. I’m troubled because I think Christian values require stewardship of resources. Food waste and disposable items are key areas where this could be addressed. You can’t compost fish, but you can compost mac and cheese, pierogies, coleslaw, bread and so forth. Wouldn’t it be great to see a student project composting food leftovers to grow a community garden?

This is a pretty solid, reliable fish fry. The food is good, the venue comfortable. The ongoing challenge is the lack of engagement although the volunteers do a pretty good job. And I noticed an older gentleman who was seated near us by himself as we were preparing to leave. He was a little confused about the process and looked a bit lonely. I spoke with him briefly, but he turned his attention to his food. As we left, I told Laura that there should be a ‘fishing buddies’ program given how many times we’ve come across people on their own at these events.

One quick note – the gender inclusive bathrooms in the hall. Ha. See, this isn’t so very hard. 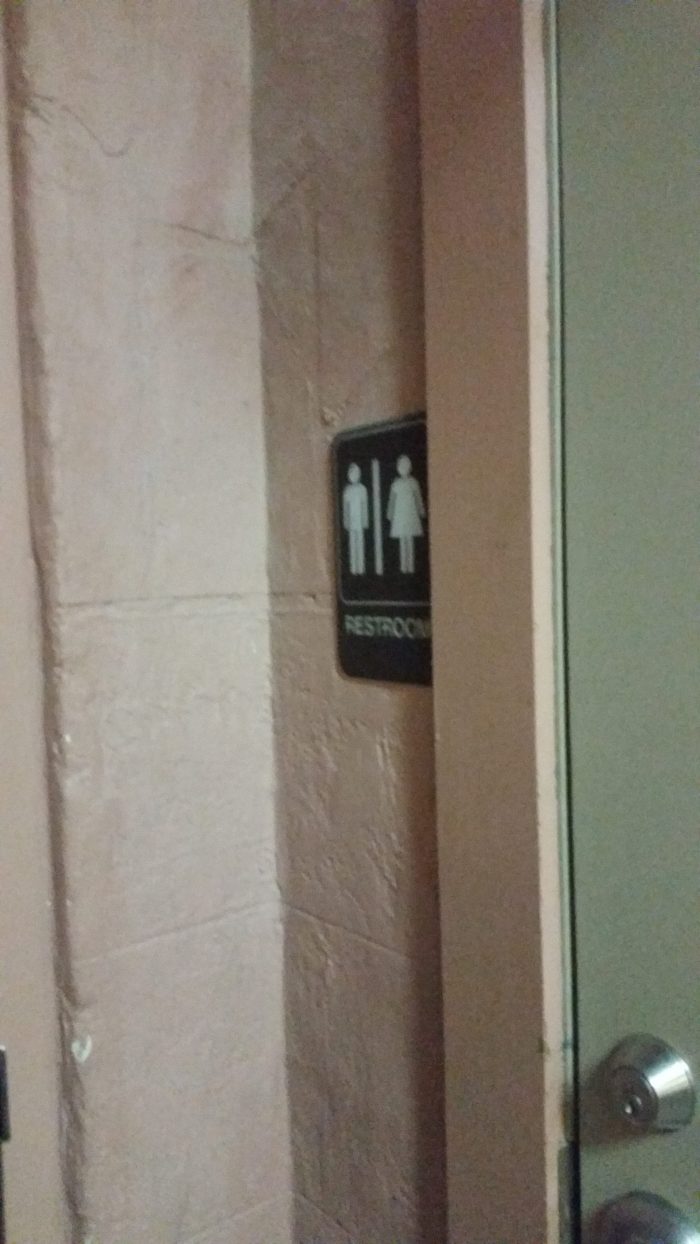 This place is bustling. I noticed that the number of people visiting my previous reviews of this particular parish fry was on the rise this past week. The takeout line was always moving.