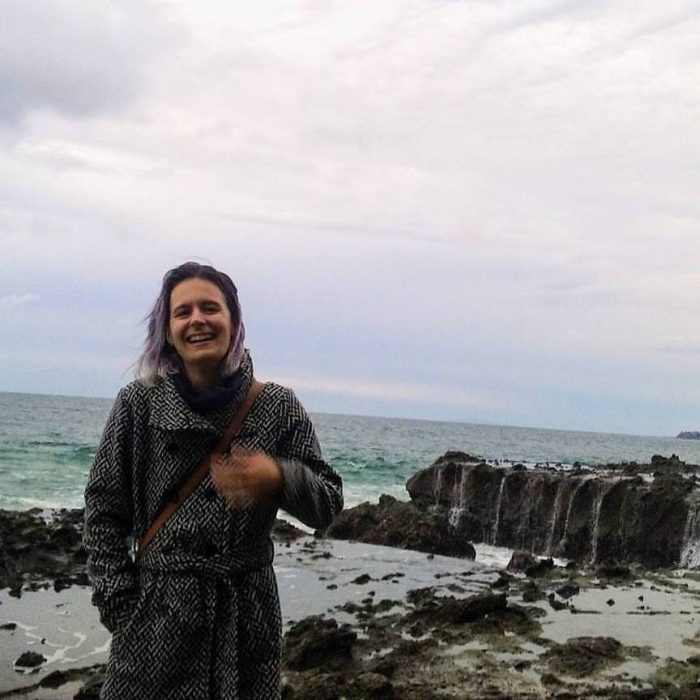 How do you describe your identity? I am a white cis woman. I am disabled by our society that allows people (mostly who are feminine) to remain chronically ill.

I am pansexual/panromantic, demisexual, queer, and polyamorous.

I’m a mother, intersectional feminist, a force of nature, a scholar activist, and a persistent pain in the ass.

Please describe your coming out experience. Where did you find support? What challenges did you face? I came out as polyamorous in 2010-2011, after I’d gotten married. Friends were very supportive, but my family was not. I’m still closeted to extended family at my parents’ request. My friends, and a therapist who worked extensively with LGBTQ individuals, were very supportive during my coming out. It was also helpful to have a partner with whom to come out, and I have an invisible disability that I “come out” about often, so I had support and practice in that way too.

How would you describe yourself NOW in terms of “being out”? Even over 5 years later, my parents still think they get to have an opinion and exert control over my relationships. We’re working on this. But their refusal to recognize some of my partners, while legitimizing my spouse, has ended at least one very important relationship. I’m still not out to my extended family, at my parents’ request.

I’m out to most new people, with the exception of some professional contacts. As a cis woman, I make determinations constantly about whether it is politically and personally expedient for me to disclose my marital status, that I have a kid, and my relationship and sexual identities, due to the sexism I constantly encounter. So if I think it’s relevant, I’ll come out.

Tell me about the first LGBTQ person whom you met. What impact did they have on your life? I knew quite a few LGBTQ people through community theater when I was growing up. I was raised Catholic, so I had internalized a lot of homophobia and transphobia, and making art and spending time with LGBTQ adults and youth helped break open my mind.

Past or present, favorite LGBTQ character or creator in television, film or literature? Please tell us why. I currently CANNOT GET ENOUGH of the film “MOONLIGHT.” It may be the greatest film I’ve ever seen. The story is masterful, so specific and nuanced and simultaneously so relatable and universal. I just got my preordered DVD copy today!! In particular, Kevin, at all his ages, is my favorite cis male character ever portrayed in media.

How do you stay informed about LGBTQ issues? I follow a lot of great resources on Facebook – The Advocate, GLAAD, and then more local groups and activists such as Roots Pride, Michael David Battle, Joy KMT. I pay close attention to what’s going on for LGBTQ people I know and respect, what they’re posting and saying and asking for support for. I’m also in Renaissance City Choir, the LGBTQ and Allied choir of Pittsburgh.

Describe your geographical community.  I live in Bellevue, a neighborhood of Pittsburgh in the North Hills, and honestly I’m not sure how LGBTQ-friendly or -antagonistic it is, as I just moved here. My current relationships are all hetero-passing, and I am infrequently out with multiple partners at the moment, so I don’t much know.

Describe your local or regional LGBTQ community.  In Pittsburgh, I’m in the Renaissance City Choir, which is the LGBTQ and Allied choir. I also seek out spaces that are welcoming of LGBTQ and polyamorous folks, and try to create and contribute to those spaces myself. I find it true that you draw things to yourself. In my case, I draw LGBTQ and polyamorous community to myself.

Have you ever experienced discrimination based on your identity? Specifically, in a job setting, when applying for housing or while in public.  I have gotten hairy eyeballs when I’ve gotten clocked when out with multiple male partners. I’m not sure how often recently, as we parent a very exuberant toddler and my current relationships are hetero-passing in isolation.

My polyamorous family faced extensive legal discrimination – we had to be cautious about our parenting, one of my child’s parents is not legally recognized as such, and tax codes discriminated against a partner who could not marry me.

Tell us about your access to health care in Western PA. Has it been LGBTQ competent (or not?) I have been seeing an osteopath at East End Community Health Center, and she’s been great for polyamory and LGBTQ issues. She just left the practice to move to California, but she trained her successor and I have high hopes for my care to continue to be excellent.

Are there issues impacting your LGBTQ neighbors that aren’t visible or part of the local dialogue? The efforts and struggles of QTPOC are severely overlooked, especially by white self-styled “progressives” in Pittsburgh. Again, see the work of Michael David Battle, Joy KMT, Roots Pride, the Our Feminism Must Be Intersectional march, the folks of Black Femme Excellence Co., Garden of Peace Project.

I encourage EVERYONE, *especially* white folks, to read Audre Lorde’s “The Master’s Tools Will Never Dismantle The Master’s House,” available for free online. Lorde articulates that we cannot achieve liberation by utilizing the tools of oppression. We must follow the lead of those most affected. Support, pay, listen to, and throw your weight behind QTPOC, in Pittsburgh and beyond.

What would you like to see elected officials do to improve life for LGBTQ Pennsylvanians? Support an a revolution that upends the electoral politics system as it currently exists in favor of an intersectional feminist community-based governance system that honors all forms of relating and kinship, with a strong centralized safety net.

So……nothing that they’re going to do, I guess?

Please share a lived experience, anecdote or fact about life as an LGBTQ person in your community. Consent is a bare minimum. In your encounters, with your friends, family, children, partners, lovers and love interests, seek enthusiasm and joy, and keep breaking your mind out of habits and patterns. That’s how we can meet each other where we’re at and have truly fulfilling relationships and communities.

Beyond discrimination, what other barriers create challenges for your LGBTQ neighbors? Truly, I believe that complacent white liberals are creating the biggest challenges to liberation, in Pittsburgh and beyond.

What is your greatest hope for the LGBTQ community in Western Pennsylvania? My hope is that the disconnects in social justice movements in Pittsburgh can be spanned. Roots Pride is wonderful, and also Delta Pride should get their act together and support QTPOC. The social justice enthusiasm that cropped up since the inauguration is a great start, and also these nascent liberal activists must learn to listen and follow the lead of POC. These are enormously achievable goals, and absolutely essential to everyone’s liberation.


What can allies do to support your LGBTQ community? listen and follow the lead of LGBTQ folks; be ACCOMPLICES instead of allies

How can gay men and lesbians support the bisexual, transgender and queer members of our community?  similar answer, by listening, and embracing BTQ+ people for who they are

What motivated you to take part in this project? I love Pittsburgh, and was asked by a contact to participate. I aim to be an accomplice to QTPOC in Pittsburgh and beyond, and I wanted to use this as an opportunity to boost their signal.

Finally, what question should I have asked? Please also share your answer. I think this is good. Maybe add a question about kinship structure – who makes up your family?