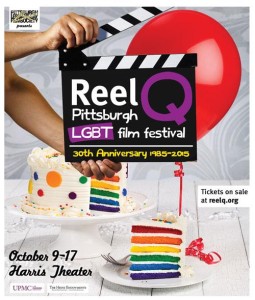 This year marks 30 years of LGBTQ Film Festivals in Pittsburgh and the Reel Q Film Festival has a wonderful lineup to celebrate. On a very interesting note, the Pittsburgh Pirates are one of the sponsors of the opening night events. I think the focus on sports comes at a very important time for Pittsburgh and the LGBTQ community. The media has been filled with stories of how LGBTQ athletes experience sports culture. And vice versa.

Opening night is Friday, October 9 at The Harris Theater in Downtown Pittsburgh. The film is ‘Out to Win’ at 7 PM.

Framed by the story of one of 2014’s most discussed athletes, football’s Michael Sam (from his coming out as a college player, to his selection in the NFL draft, to generalized “locker-room panic,” to the kiss heard ’round the world), Out to Win features in-depth interviews with an all-star lineup of trailblazing lesbian and gay professional athletes: tennis legends Billie Jean King and Martina Navratilova; Jason Collins, the first openly gay active NBA player; former NBA player John Amaechi; former pro baseball player Billy Bean; WNBA superstar Brittney Griner; activist and former NFL player Wade Davis; and retired NFL player David Kopay, who was the first former NFL player to come out as gay. With incredible access and insightful commentary from leading sports journalists, agents, coaches, activists, and fans, the film contextualizes the struggles and triumphs of these brave game-changing athletes.

Director Malcolm Ingram and several members of his crew will be present for the screening and will be holding a Q & A session afterward.

After the film, join us for a Sports Themed party at Bricolage Production Company! Wear your favorite sports themed outfit or uniform! There will be food, alcoholic beverages, music, and a photo booth!

Head out to see how the movie ends and know that all will be right with the world.

Pittsburgh Lesbian Correspondents is proud to be the Social Media Sponsor of ReelQ30. Watch this space for more information on upcoming films and other events.