What started as a fun little flower order took on a life of its own this weekend when local florist K.S. Kennedy Floral arranged flowers for the Rolling Stones visit to Pittsburgh.

It started with a phone call asking about a delivery on the Northside for Saturday afternoon. Owner Kerry Kennedy is based on the Northside so that was not a problem. After a few minutes of conversation about the order, he realized that it was intended for none other than Mick Jagger. And this was no ordinary fan request, it was from Shannon Holliday who was photographing the tour and sends Mick a personal bouquet at each stop.

Things spiraled from there and soon K.S. Kennedy Floral was also preparing 13 floral arrangements for the crew and the band via the tour management.  Then, he was coordinating orders for their Milwaukee performance – did you know that you can use a local florist to coordinate floral deliveries practically anywhere?

It was a fun weekend assignment. I had the opportunity to sit down with Kerry while he created the Jagger masterpiece and then he let me ride along for the delivery to Heinz Field. My only complaint is that Kerry kept singing “Moves Like Jagger” rather than an actual Stones song, but that was totally intended to be a compliment. Plus, he only knew the refrain – oy vey!

The irony is that I did not go to the concert (OMG – so expensive), but Ledcat did go. So my experience of the performance pretty much was moving the flowers to Jagger! 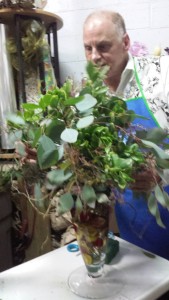 And the next day, Shannon sent Kerry a text …

” JAGGER LOVED THE ROSES ! SAID IT WAS FRICKIN MAGNIFICENT !”

Sometimes embracing the unexpected “cool” moments can be a jolt of fun and give us a great memory.

Full Disclosure: I provide social media support to K.S. Kennedy Distinctive Floral. It was a lot of fun to be part of this unique moment and to witness how much of the social media lessons Kerry has implemented into his business. I strongly encourage you to consider K.S.Kennedy if you have floral needs – be it for Mick Jagger or for a corporate event.