We selected this fish fry because of the proximity of the church to Ledcat’s Downtown workplace and the historical components of the church. I used the Google map for fish fries to help narrow down our options. We haven’t spent much time in Polish Hill so it seemed like a good opportunity to do so.

We left town on a rainy afternoon and made our way through the Strip District to find an ATM, then took a quick turn up the 28th street bridge to Polish Hill. It was all street parking, but we luckily found a spot just outside of the church. I was a little anxious about arriving in time for fresh food because the website warned that they sometimes sold out early. The wafting smell of fried fish helped us make our way from the street to the parish hall. Kudos to whomever thought to put the large signs up on rope and stakes along the front of the Church buildings. 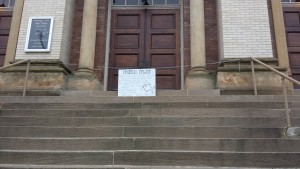 The Church hall is a modest size (it probably was portioned off for this) with bright furnishings and lots of lighting. About a dozen people were scattered around the room eating, seemingly parishioners. We approached the table to order where two women greeted us politely and explained how things worked. I had the impression they thought Ledcat was my son (again), but they were unfailingly polite. 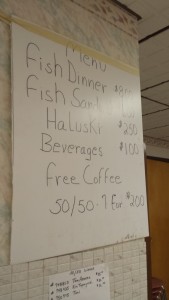 The menu was very limited – fish sandwiches with or without fries & slaw, haluski, macaroni and cheese, and some beverages. I had a sandwich while Ledcat opted for the combo. We split a side of haluski. Sadly, the mac and cheese was sold out. We also bought two beverages and our total came to just under $19. Coffee was free while other beverage options included Diet Pepsi, Pepsi, bottled water and one can of diet cherry Coke.

I bought some 50/50 tickets ($2) and by the time we made our way to a table, our food was ready and delivered to the table in styrofoam containers. There was also a line of about a dozen other people waiting to order their food.  Condiments, silverware and a thoughtful little dish of Lifesaver mints were along the side of the room so Ledcat hooked us up while I filled out the raffle tickets. 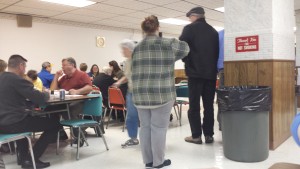 The fish sandwiches were delicious. The fish was moist and the batter lightly crunchy without a hint of greasiness. We could have easily divided one sandwich. The fries were a bit cold and soggy with little flavor. The coleslaw was good, but came in a very small portion. On the other hand, the haluski was a huge serving of shredded cabbage nestled in perfectly cooked egg noodles with a good amount of pepper.

We were both quite full in spite of the soggy fries. Ledcat poked around the space while I went over to look at the raffle baskets. The woman selling tickets spoke to us for quite a while about the church – her own parish had closed and she had opted to join Immaculate Heart because of her Polish heritage. She told us that the church works very hard to uphold Eastern European Roman Catholic traditions. The church was built in 1897 by Polish immigrants to the region who numbered more than 400 families.  It is a historical landmark and home to a first class relic of Blessed John Paul II – a piece of his blood stained cassock – presented by Cardinal Dziwsz of Krakow. They have a Polka Mass during their annual summer festival.

The church also has a weekly Mass in Polish and is an active participant in Gorzkie Zale, the Lenten Lamentations. They also participate in the Seven Churches Visitation tradition on Maudy (Holy) Thursday.  She also described how they celebrate Easter and Christmas. She was incredibly nice and invited us to attend, but without at all being recruitish. 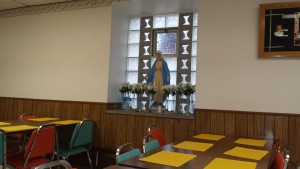 Cons: limited menu, fries not good, street parking could be hit or miss, no visible recycling options, limited hours (ends at 6 PM which is tough on working people)

This church is one of the first where I have felt a sincere desire to come back and attend Mass, due in great part to our conversation around the raffle baskets. I was so moved that I bought a giant amount of raffle tickets. And we might participate in the Seven Churches Visitation.