What’s the one piece of advice you wish someone had given you a year (or five, or ten…) ago?

I recently finished reading “Body Counts” by Sean Strub, a memoir that illuminates the cultural and political history of HIV in the 80’s, 90’s and 2000’s. As soon as I finished this book, I began reading “Eating Fire” a history of the Lesbian Avengers.

Both books fill gaps in my knowledge about the history of the LGBTQ community, gaps that are shared by most of the LGBTQ people who I know in my age group (under 45) in Pittsburgh. In fact, yesterday I asked on my Facebook page if anyone could name a Pittsburgh member of ACT! UP and no one did. Not a single person. Not a single name. Today, I posted that same question about the Avengers.

I wish more than anything that when I first came out, I had made a point to connect with elders and learn their stories and tales. I wish someone had said to me “Invite someone out for coffee and ask them their story.” I wish I had kept in touch and found ways to do those interviews and tried to learn our history. Not for the blog, but for me – for my sake.

Now that’s on the other side of 40, I find myself more and more often encountering enthusiastic younger folks who have revolutionary ideas on how to improve things. When I graduated with my MSW, I had already worked more than 5 years in the human services field and been humbled a whole hellava lot of times. I knew enough not to go bursting in with ideas – but I did it anyway and I didn’t always stop to listen to the institutional wisdom of those who had been there. And so I continued to have it hammered in my head that this is not a good way to proceed.

Karma is a bitch right and now that I’m over 40 and seemingly unemployed, the number of younger adults popping up to tell me how things should be or so forth has noticeably skyrocketed. I take umbrage because it is rather insulting for someone to burst in with big ideas and assume everyone will embrace their enthusiasm. It is also annoying to keep going over the same ground over and over again. And I deeply regret the too many times I behaved thusly.

So the advice I wish I had received?

Assuming young people don’t have wisdom and experiences and real knowledge to share is also a bad idea, but that’s advice I give myself NOW 🙂

It makes me a little sad when my peers talk about what is happening in Pittsburgh (and Pennsylvania) as if it is some isolated form of activism that lacks any real connection to what came before. Reading how the Avengers sprang from ACT UP because they needed visibility for lesbian issues, not because the work around HIV and AIDS activism wasn’t important reminds me that it doesn’t have to be a competition.

But to be fair, a lot of the older activists and community elders have stepped back. That doesn’t make it acceptable to disregard history, but it does make it more difficult to understand it. So the dialogue is a mutual obligation. 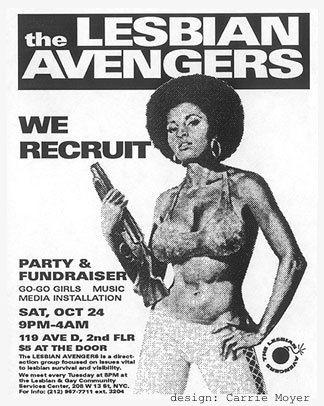