Daily Prompt: Write about a noise — or even a silence — that won’t go away. (We’ll let you interpret this in different ways…)

There’s a noise that drives me absolutely insane, right up the wall on the aggravation scale. And my abiding fear is that one day – possibly soon – it will go away.

My “boys” are 12 years old this week. That’s elderly for their breed mixes and it shows. Over the past year, they’ve lost some mobility and flexibility. They like to sleep. They both take various medications. But they eat and have a degree of enjoyment in their lives that I am grateful to witness.

The noise? Slurping. Specifically, slurping from their water bowls. Oh, they do it differently – Amadeus makes big boisterous tongue slaps filled with water which goes everywhere (he licks it up) and due to his medication, he does it twice as long as before. We are talking can’t hear the television, cats might be howling and who would know, boisterous “I haven’t had a drink in 20 years” type of slurping.

Alexander, on the other hand, is a bit more dainty but takes three times as long – small purposeful gulps that punctuate the room, furtive almost as if he expects the water to disappear (that’s the anxiety manifesting itself). He’s lapping and looking over his shoulder at the same time. There’s no reassuring him because if approached, he simply stops drinking and then engages in the post drink licking (OMG.) He always has access to water in various locations and always has, even when he was crated. The vet says its just a “thing.”

I witness this a dozen times a day and I will admit, it grates on my nerves. I am careful to grind my teeth and look away so Xander isn’t deterred from drinking. I’m grateful they can both pick themselves up from their beds and get a drink. I’m grateful they want to drink.

And my fear is that one day – they are 12 after all – I won’t hear it ever again.  They’ve never been apart in the entire 12 years – they were even neutered together. Deus had surgery on his shoulder but he was home that night. Deus’ arthritis makes him unable to climb the steps to the second floor so he now sleeps in the living room and Xander chooses to sleep upstairs. That’s about as apart as they get.

I fear walking downstairs to feed the Chihuahua and the cats, to hear only the daintiest of sips. I fear empty space on the living room floor now occupied by very large dog beds. I fear I’ll who will go first and how it will affect the other (and Ana – the Chihuahua.) I fear that I’m not doing right by them now and wish I could go back in time and do it again.

In the meantime, we have an elevated water bowl set for their comfort – I fill it with ice in the AM because they both seem to really like cold cold water. I put water in their food to make sure they are hydrated. They take their meds, they go in and out to the backyard, and they enjoy their toys – kongs stuffed with goodies, stuffed toys with treats in secret pockets, even an occasional snuggle buddy for a nap. They still bounce up and down when its time for a car ride. And they flop with abandon when the dog bedding is washed and fresh and plump.

I fear the silence when the big dog sized water bowls are no longer necessary.

So I don’t want to noise to go away, but I do understand that it will. 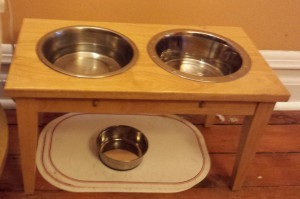