The first card we received this year was sent to “Sue and Laura” – it’s from my very conservative Christian cousin’s family so I’m glad they at least acknowledge our relationship. But I wish they realized Laura has a last name. It has been ten years.

The second card was sent to the “Dunhoff-Kerr Family” because a dog friend considers us a family and our pets as part of that blended family.

The third card was addressed to Laura only, but included me in the inside (along with the critters.)

And so it goes … the holiday cards from people who have no idea how to address a same-sex family.

Most of the time, I’m simply glad to be remembered and appreciate good faith efforts to be courteous (like using both of our first names.) But sometimes, I find myself quite annoyed that people don’t put any effort into getting it right and treating us like all of their other card recipients. I highly doubt they send a card to my brother addressed to “Jim and Traci” or to my other cousins as “Jill and Mike.”  This problem is greatly mitigated by the fact that most of my relatives who send cards don’t mingle with lesbians (especially liberals who criticize the Catholic Church) so we don’t get that many cards any longer – Facebook destroyed their veil of illusion that I was just going through a phase. I’m now blocked and no longer receive cards.

So much for goodwill to all men.

We tried to provide them the necessary information by carefully labeling our own cards with our first and last name which is both awkward and ineffective. If you receive a card from “Mary Smith and Ellen Johnson” it doesn’t seem very family-like does it? Try writing that out as a return address on 25+ cards and watch your hand fall off.

Then I came up with the idea to blend our last names into “Dunkerr” to see if it would catch their eyes and make them ask questions. That didn’t go over too well and led to questions like “I thought your last name was Kerr, is it Duncan?”

My married friends don’t have much sympathy for me. Many still receive cards addressed to “Mr and Mrs” sometimes even “The David Smith Family” even after decades of patiently explaining that she kept her last name or that she is in fact a “real” Dr.  My response to such situations is to hyphenate and hope for the best such as “The Smith-Fisher Family.” It’s not a legal document after all and it’s the simplest way to be inclusive.

We don’t really get many cards these days. A lot of people seem to be dropping the tradition in favor of online wishes. I’d wish to revive it – I love getting mail (I work from home so I always get to the mail first.) I also love being reminded that people care about me (and Laura.) I love reading the cards and admiring the photos. I never throw cards away or recycle them. I have huge stashes of them in the attic with the decorations and I read them each year.

Why does it matter? Well, as routinized as the holiday card list can be, it still is that one time each year that people make time to send a little greeting. And it stings a little (maybe a pinch?) to be an after thought (Mary Smith and Sue) or to realize that someone doesn’t know your last name and doesn’t make an effort to find it out. Maybe they are busy and forget, but … it’s been ten years. At what point does it matter enough to make the effort? Is it just an oversight or a reflection on being a same-sex couple, are we part of the family or simply tolerated?

I am making a resolution this year to embrace each card as a well-intentioned effort by whomever sent it. After all, for each person who mangles the name, there are at least 2 cousins who blocked us on Facebook. Whom would I rather hear from after all?  And I have an additional challenge below this photo. 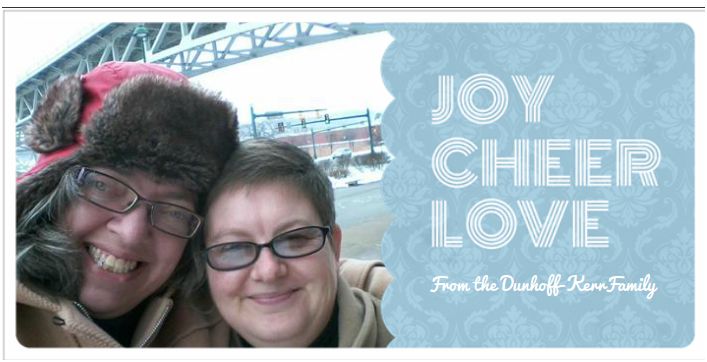 This photo was taken at the Waterfront outside of Red Robin – you can see the bridge in the background. It was New Year’s Day 2013.

If you send me a card, I”ll donate $1 to Pittsburgh’s LGBTQ Community Center which makes all families feel at home.

You can send the cards to