An occasional series where we pose some questions to local LGBTQ folks (and Allies) to learn more about their personal experiences with LGBTQ culture.  Click here for a complete list of all LGBTQ&A profiles. 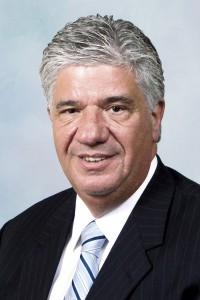 I’ve lived in Senator Fontana’s district for more than eight years and I”m very active – I email him pretty often and always get a response. He’s usually 100% on board with my point of view (at least in terms of what I actually ask for) and often takes the time to send a personal note or comment to me. Fontana is an ally and I hope you will find his profile a welcome return to LGBTQ&A!

Tell us about the very first LGBTQ person you met and what that meant for you. Very honestly, I’m not sure I can provide a specific answer to the question. Equality is a value that was instilled in me from an early age and I have always looked upon and treated others as I would hope to be treated. Unless someone has told me directly what their sexual orientation is, I cannot really quantify how it would have played in my impression of someone. It’s who people truly are based upon their actions and quality of character that leave meaningful and lasting impressions on me – not just one facet of their personal life.

How do you stay informed on LGBTQ issues? As with any issue, I consider the best way to stay informed is through ongoing dialogue with advocacy and educational organizations on matters that affect them. Most importantly, I always take the input of my constituents on issues into consideration. I am lucky to represent a district full of people from diverse backgrounds who are actively vocal on issues that affect them individually and as citizens of Pennsylvania as a whole. While I often times receive differing opinions on many issues, I find that each voice helps me to put into perspective the effect my vote or actions will have. This is why keeping myself educated on such matters is something I take very seriously.

What is the most important issue facing the LGBTQ community today? In my opinion, the most important issue facing the LGBTQ community is that of equality. This isn’t something specific to the LGBTQ community either. Whether we are talking minorities, women, LGBTQ, etc., while our nation and state has made significant strides over decades, there is much work to be done in the way of equality for all. The 14th amendment of Constitution – Equal Protection Clause – is one that too many times is unjustly ignored by state lawmakers. Arbitrary discrimination or special treatment for or against any person or group is unacceptable.

If you could wave a magic wand and change one thing in Pittsburgh’s LGBTQ community, what would it be? My suggestion would be to very simply keep up the strong advocacy efforts and ensure that the conversation stays at the forefront. As we saw with the recent SCOTUS decisions, strong advocacy efforts through education and proof of real evidence of how continued discrimination under the law is ongoing is beginning to have a true effect in progressing the argument of equality for everyone.

Past or present, favorite LGBTQ character in television, film or literature? My family enjoys the show Modern Family. In addition to featuring a gay couple who are raising a young family, the show’s title and story lines surrounding the lives of three different households of a core family hit the mark. The “modern family” can be one of varying makeup. It showcases a point I mentioned previously – that all of us, no matter what are background – have more in common in the sense of everyday life than one might assume. The show is hilarious and popular because we can all relate on some level to the situations they deal with and how the family is real sample of modern day life.

What is one simple thing a reader can do to support the LGBTQ community? Education is key. There are many falsehoods and unnecessary stereotypes in our society with regard to the LGBTQ community that play a large role in the discrimination against the community. In my opinion, an important way to right that wrong is by educating opponents through efforts that outline how members/families of the LGBTQ community are like anyone else. A person’s sexual orientation or the makeup of their household does not make everyday life – be it accomplishments or challenges – less important or different from the rest of us.