The meme about the Texas State Legislature banning state resident from bringing tampons or pads into the General Assembly buildings during a heated debate on abortion really got me thinking.

On its face, this is patently absurd – have you ever tried to throw a tampon at anyone? Or a pad? Even drenched in water, they weigh next to nothing – its like throwing a wet tissue. How much damage can you do? And when you are talking about standing/sitting on a balcony – its like throwing confetti. From your vagina I guess.

You could take off your shoe and use it as a more effective projectile. Or throw your gun at someone. Seriously.

Because that’s the real reason this meme caught on – tampons/pads are items necessary for good health for women between say 14 and 45, give or take. Health care. They are not about stopping the flow of Satan, or keeping our panties clean or being pure & holy. They are a crucial part of current reproductive health care for girls and women who menstruate – a function of our physical health.

(Yes, I know there are other methods like the cup, but for my purpose – I’m focusing on these two items.)

I know all about menstrual shame, believe me. I remember that dreaded “talk” in fifth grade, getting my period and not wanting to tell anyone and dealing with the odious discomfort of bulky 1980s pads for years. Uggghhh. NO ONE talked about it. I internalized that shame from age 11 to 23 when I was confronted with the fact that I needed surgery on my uterus to address endometriosis. Suddenly, I was talking about it – trying to understand, feeling very angry that I had lost approximately 1 day per month for 12 years to the pain – and no one had ever told me it might be something medical that could be treated. 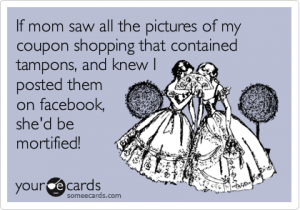 No, it was simply my burden as a woman. Ironically, my then boy-friend was from Texas and he was absolutely terrified of going to the store to buy a box of supplies for me. I thought it was funny. Until I was recovering from surgery and he still wouldn’t shop for them. The irony was not lost on me. The boyfriend soon was.

Still, I’m not about to lob blood soaked tampons at anyone because ewww – I don’t hurl body fluids as a matter of ethics and hygeine. And tampons aren’t cheap.

And that’s the other matter – the war on women involving access to abortion, reproductive services and even tampons/pads is extra hard for women and girls living in poverty. And THAT is what really angers me. The women in the wealthy privileged families of these legislators around the nation will not really suffer because they will continue to have access to the health care money can buy. Well, they will suffer (sigh) but not in a way that penetrates the consciousness of thick-skulled patriarchal control freaks of any gender.

Soon after my big menstrual revelation, I moved to Todd County, Kentucky. There was no red light in the entire town. And we all dined at the Dairy Queen. It was so incredibly poor – I was shocked out of my naive 20something mind. But one of the most shocking (and humbling) moments of my life was when the women volunteering at the thrift store that I ran asked me for the rags. I assumed that they used them as I did – cleaning, messes, etc. But they kept taking them and taking them. I was perplexed so they assumed I was angry. Finally, one of the women (her name was Shirley) took pity on me and explained

The women used the rags for menstrual garments. So they buried or burned them each month and needed more. (In really bad months, they used the rags as toilet paper. Not making that up at all.)

Tampons and pads are not covered by food stamps. Not covered by health insurance. They certainly aren’t cheap – one woman can easily spend $10 in a month on this item. So the women made do (I assume they still do) because they weren’t going to take $10 out of the food budget or the money for gas to get to work or things for the kids. They didn’t have $10 – so they used rags.

That was 1995. Fast forward to 2011 when I learn from a local advocate that young women in the local high schools face the same issue – and that girls miss school because they don’t have supplies. A mom with two daughters of child bearing age can’t just magically come up with $30 or $40 in cash even if she is working and accessing resources and services.

Today. In Pittsburgh. In Your Neighborhood. Girls and Women Are Using Rags. Missing Work and School Because of the Shame and Stigma of Being Poor Women. Being Women.

That’s why I’m so angry at this meme and the larger debate – tamons and pads are not weapons of mass destruction. We don’t even have enough to take care of all the women who need them and you stupid-ass legislator think we are going to WASTE them on you?

You aren’t worth it. You might be worth my using the tampon applicator as a peashooter and the wrapper as a spit ball, but probably not. I can either recycle or compost those. And that’s more useful than feeding into your uturine-frenzied hysteria about the color red and a small wad of cotton.

If I were forced to hand over my health care items to access my rights as a citizen, I’d file a discrimination complaint so fast their heads would spin. I’d damn sure talk about menstruation and biology and healthcare and cramps and all the icky things that go along with it. There’s no way a woman menstruating heavily could be in a room without access to a clean tampon or pad for that many hours without compromising her own health.

We can’t afford to waste tampons on vagina glitter special effects, no matter how tempting. While our legislators wreck havoc on our access to health care (and other services to which we are entitled as citizens), we must remember our sisters.

I encourage everyone outraged by this story – the whole damn story – to take action: buy a box of supplies and donate them to your local food pantry, homeless shelter or any program working with girls and women. If you are part of the LGBTQ community, find a group working with transmen and offer to donate – yeah, you had to stop and go “oh I never thought about it” didn’t you? Donate them to the local school or free clinic. Use your coupons and sales and reward cards to pick up extra boxes when you can.

Don’t waste perfectly good and limited health care resources on scoundrels. Be the change you want to see in our goverment – take care of those who need access to reproductive health care.