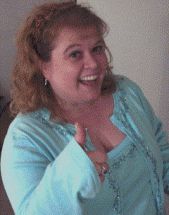 Tammy is a new-to-me online friend. She read the blog and then we connected via Facebook. I admire how she puts herself out there to engage new people & experience new opportunities. She describes how connections with other LGBTQ persons would have impacted her own coming out process –  I believe she strives to meet that goal by sharing her own story and talking openly about the challenges of getting to know people in the community.

Tell us about the very first LGBTQ person you met and what that meant for you. Truthfully, I cannot remember the first person I really knew. I came from an old fashioned home, attended Catholic elementary school, and went to high school in the country. One persone who stands out to me, although I never met, was Ellen Degeneres. I watched the television show where she came out. I watched her career take a nose dive. Then I watched the first episode of her talk show, and I kept watching. She is an inspiration. She could have hid away for the rest of her life, instead, she has a talk show!!! She goes out everyday and is herself, she is generous, funny, successful, and open about her love and marriage. I also love the fact that even though she is open and out, her focus is on loving and being generous to everyone, no exclusions, no one group or type of person better than the other. That is how it should be, just spreading laughter, love and charity to all.

How do you stay informed on LGBTQ issues? Until recently, I only stayed informed through the regular media such as the Post-Gazette or the 6 O’clock news. However, recently, after I came out earlier this year, I have tried to join groups on FB, joined maling lists for articles from websites such as GLCC, and to read blogs such as this one. I think doing this has helped me with so much of a better understanding of the LGBTQ community, and of myself, as I am getting information from people who are living the issues.

What is the most important issue facing the LGBTQ community today? One issue that always breaks my heart is bullying of teenagers, or hearing of young LGBTQ people who are suicidal because they have no where to turn, or do not realize that high school is just a small point on their life path.

If you could wave a magic wand and change one thing in Pittsburgh’s LGBTQ community, what would it be? Being so new to the community, I am not sure what I can say on this topic. For me personally, I have struggled many years with how I felt. I come from a Catholic neighborhood and a Catholic family. I never told anyone, not even my best friend of 25 years, not even my ex husband who is still a very close friend, how I felt. I finally found a woman I was interested in dating, so I just did it, I came out. Suprisingly, everyone I have told has been okay, been supportive on varying levels. This woman and I are no longer dating, but because of her, I had the strength. I think what would have helped me was seeing or hearing from more people who felt like me. Having access to information or people through out all of Pittsburgh, in the neighborhoods, who work together to help others struggling.

Past or present, favorite LGBTQ character in television, film or literature? I loved Jack McFarland on Will and Grace. He was so comfortable with who he was, made no excuses and was happy.

What is one simple thing a reader can do to support the LGBTQ community? I think to interact with the story. If reading an article or a blog, comment, ask questions if you have any, or share the article. From my personal experience, I think the big thing is to not stay quiet anymore, to actually talk, and talk a lot to anybody, to everybody about the issues.

Thanks for contributing Tammy!