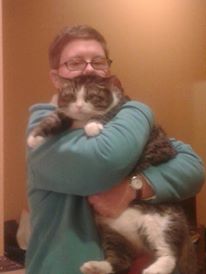 If there is one thing I’ve learned, it is that a proper introduction to your partner of ten years is a difficult thing to write. You’ve been reading about her (and reading her posts) for 8 years – without further ado, here is Ledcat’s LGBTQ&A.

Tell us about the very first LGBTQ person you met and what that meant for you. In high school I knew that the brother of a friend was gay, but he was much older. It wasn’t until I was a junior in college at Penn State that I found out that I was gay and then met other gay people that I hung out with. It meant a lot to me to know there were other people like me, that I wasn’t all alone.

How do you stay informed on LGBTQ issues? I keep informed on gay issues by reading Huffington Post, CNN and the Post Gazette.

If you could wave a magic wand and change one thing in Pittsburgh’s LGBTQ community, what would it be? I would like to see a LGBT social group formed that does a wide range of social activities outside of the bars. A group that would go to Kennywood, to Sandcastle, on picnics, hikes, to dinner, hold potlucks etc.


What is one simple thing a reader can do to support the LGBTQ community? Vote. Advocate for equal rights for the LGBT community. Stand up and be counted.