Now, I’m sure some folks might be tempted to snark on the association of vinegar with moi. And while “ha ha ha” is my first response, I do admit the shoe might fit. 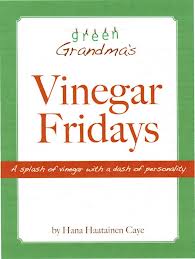 But recently I’ve grown interested in the use of vinegar as a healthier alternative for everyday home and personal needs. I met blogger Hana Haatainen Caye aka blogger Green Grandma through the Allegheny County Green Works Festival in 2011 – she was collecting plastic bottle caps to recycle with Aveda Salon. I began reading her Green Grandma blog and saw repeated instances of vinegar to the rescue. So I purchased her very affordable book “Vinegar Fridays” and began to educate myself.

I skimmed the book and was a little overwhelmed with the amout of information. So I took a step back and identified a few key priorities I’d like to tackle. We put in a supply of distilled white vinegar and some organic apple cider vinegar. I am spending this first week using a 50/50 DWV and water mix to do some light cleaning and pet stuff – cleaning up messes, freshening bedding and spraying spots to keep the cats at bay. Here are my first experiments:

So vinegar is probably going to earn a regular rotation in our green lifestyles. My next project is to tackle the inside of my CRV – the 50/50  mix is supposed to be good on windows, dash and even the carpeting.

Have you tried vinegar to green your life?