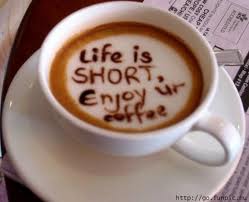 I love coffee. Didn’t have a taste for it until I lived in Baton Rouge in 1993 – that was my first experience of the “coffee house” experience – chicory coffee and beignets. I gained 30 lbs. Then I moved to rural Kentucky and basically had diner coffee for two years. It was another ten years or so before I started regularly making coffee at home – and I was fine with Maxwell House and such because I was very poor. I drank it with sugar and skim milk. Ick.

I can fairly say that my introduction to real coffee and coffeehouses came with my coming out – lesbians drink coffee. So I began patronizing Starbucks and such – I learned that I like strong coffee, I don’t like sugar but I like half and half. I owe that one to my Dad who can very dramatic at Denny’s if they bring him artificial creamers. Its Denny’s, Dad.

Now that I work from home, I make 6-8 cups in the morning which translates into 3 actual mugs of coffee that I drink by noon. Don’t tell my therapist or psychiatrist because I dutifully repor that I drink one serving. But …no. Afternoon, I honestly don’t drink caffeine unless I’m really tired. Even then I know that the drink will perk me up for a bit (pun!) but the edge will kick in hours later. One advantage is that if I have an afternoon meeting, I always get a simple cup of decaf which is typically affordable – and I use my trusty stainless double walled Starbucks 16 ounce travel mug so it stays warm for many hours. If we go out to dinner and have dessert, I’ll have a cup of decaf sometimes. Or if the restaurant is chilly, I’ll order decaf.

The energy from coffee comes in three forms:

Coffee for me please.