The candidates questionnaires are up at the Liberty City Democratic Club site.  I like how they handle this – all of the candidates in each race are listed so you can see clearly which candidates took the time to respond and which did not. 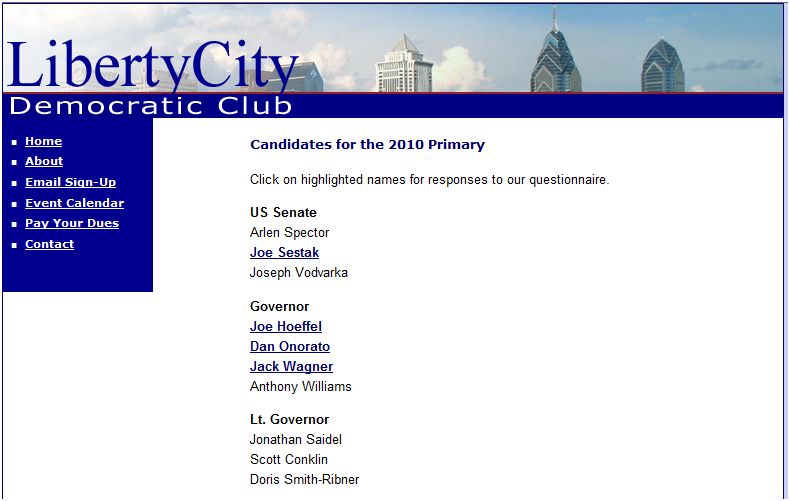 Now granted they misspelled his name, but how can Arlen Specter ignore the gay democratic club in SE Pennsylvania?  How can Anthony Williams ignore them when he is gunning for some of Hoeffel's supporters?  How can all three Lt. Governor candidates ignore them?

Now I've attached the three gubernatorial questionnaires to this post so they are preserved for posterity.  Something odd I noticed — the Wagner campaign submitted the Steel City aka Pittsburgh questionnaire to the Liberty City aka Philadelphia group. They aren't the same.

I strongly urge you to either visit the site or download the attached .pdf files and review the candidate information.  The Philadelphia specific information may give you some insight into how the candidates may govern on a statewide level.

I think if you review the significant LGBT indicators you'll agree with me that Joe Hoeffel is clearly the strongest leader and the only progressive candidate.  Jack Wagner has a decent track record — he has introduced legislation and voted on LGBT issues.  His anti-choice stance makes him the second best candidate.  Onorato, well just read for yourselves.  He can safely be in third place with no LGBT voting record and waffling on the choice issue.

There's a clear choice for the LGBT community and you can see that from the candidate's own words as well as their track records.