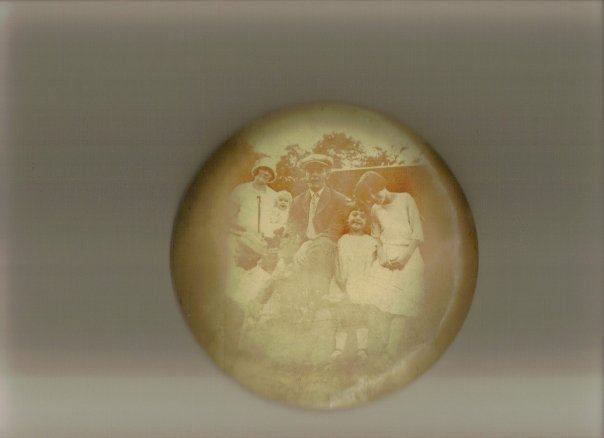 I have been an amateur genealogist for about 12 years and just discovered my first long lost relative via Facebook. I've found plenty of folks via ancestry.com and other websites, mostly very distant cousins.  My mother found my father's cousin at her hair salon.  I am using Facebook to connect with known relatives, which is surprisingly underutilized by my extended clan.

Who?  Well, it is a long story that boils down to my grandfather's biological sister being adopted by extended family after their own father died.  She and her children wove in and out of the family, lived a few blocks away but there was no real contact.  On Friday, contact was made when I called my Dad's cousin Dave and emailed him my family tree file later that afternoon.

So in about 24 hours, I've added this whole branch and filled in some “missing pieces” of my Dad's life.  That's pretty cool.

The image above is a button I found in my grandmother's belongings.  It apparently was a photo taken at a fair circa 1925.  The adults are my great-grandparents, Kelso and Edna Kerr.  The boy sitting on the ground is my grandfather around age 12.  The baby is my Great-Uncle Jimmy.  The older girl is my Great-Aunt Edna (Aunt Diddy) and the the younger girl is Great-Aunt Ruth.  Aunt Ruth is the only one still alive — she's 90 next week.  This is the only memento of my grandfather's childhood I have ever found.

(I have yet to discover any other gay relatives, but with 1200 and counting it can't be long … quite a few bachelors in there!)