What's more important for local social justice – the stability of the Thomas Merton Center or the culpability of a dead police dog?  I'd like to ask Carole Weidmann that question.  Carole's pants were ripped during an anti-war protest a few years ago and the culprit may have been Ulf, the dog who was shot and killed by Justin Jackson a few weeks ago. Mr. Jackson was subsequently killed by return fire.  (Ripped pants do not equal dead teenager.)

Carole is oft brought up as an example of the horrors of police brutality in Pittsburgh.  Carole is also a board member of the Thomas Merton Center, Pittsburgh's most significant anti-war organization.  The Merton Center seems to be in terrible straights — almost all of the professional staff have resigned.  One sent an email (I have a copy if you want it) citing board issues as a reason for his resignation.  The organization is struggling financially.

Who is going to protect the rights of other Justin Jacksons if TMC isn't back on solid ground?  As a member, I'd personally prefer Carole put her time and energy (and her legion of fans) to use on that issue.

It is sad to read a City Paper story about a CMU student who claims to have stared down Ulf and avoid being “mauled” as he put it.  That's just silly, condescending talk.  David Struthers believes his elite status saved the day when he was confronted with a big bad police dog anxious to get 'em.  I noted with some interest that the City Paper did not include any perspective from reputable dog trainers.  I have consulted a few and their interpretation of the YouTube video footage is very different than Mr. Struthers.

Further, there's the never-ceasing coverage of police dogs gone wild with little if any acknowledgment of situations where police dogs saved lives or prevented violent endings.  No information on the difference between a dog grabbing a suspect and a dog biting a suspect.  Anyone with large dogs can tell the difference.  A dog can be trained to subdue.  They do it every day and no one ends up dead.  It doesn't take Swami Struthers to prevent a catastrophe.

I love the man called Potter and his crew.  They do good reporting.  But this story mimics the one-dimensional approach to the death of Justin Jackson we saw when the story broke.  And it continues to really piss me off to see all of this man v dog coverage.   And I would be disingenuous if I didn't write this post out of deference to their feelings.  I almost didn't.  But they have much thicker skins than certain people who write 80 paragraphs responses to my criticism.  So on we go …

If David Struthers is so concerned about the other Justin Jackson's of the world, maybe he should call up Carole, roll up his sleeves and do something to build up the TMC.

Instead we get this …

Still, Struthers believes, there was one overwhelming factor that helped his police-dog encounter toward its peaceful end. “I had a confidence, when I was sitting there, with the dog coming toward me, [police] weren't just going to let the dog maul me,” he concludes. “First, because there were a lot of people there. But, really, if you release dogs on people attending elite universities there's going to be a lot of people upset at that,” and very publicly. “I can't imagine [Jackson] thinking that a lot of people are going to care if he gets mauled, in the world at large. It changes how you are going to react in that situation. What happened to this guy was par for the course in many Pittsburgh neighborhoods, and that's the real story, as far as I'm concerned.”

Par for the course?  Ahem.  This man puts monies (and his talent) in the coffers of a University that builds robots for war.  A war in which Justin Jackson is much more likely to be used as cannon fodder than CMU “elite” students.  So spare us the moral high ground, David.  You have no clue what Justin was thinking when he pulled that trigger and it is insulting to imply otherwise.  More importantly, why don't you speak out about what you are doing to make a difference?

To summarize.  Stop the man v dog media coverage.  Give the public a well-rounded perspective on police dogs  — find out how many suspects have been apprehended without violence with the assistance of a police dog — now that would be a story.  Consult dog behavioral experts instead of college students for analysis.  Figure out what the hell is going on with the Thomas Merton Center — they don't even list their board members on the website. 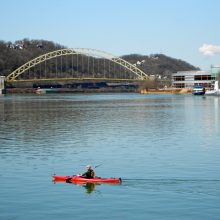