So, we might be adopting a dog on Monday.  Her name is Ana and she is a Chihuaha mix.  She was rescued.  She lives with big dogs and has lived with cats in the past.  She weighs 9 lbs. Ana comes from Starfish to the Sea Animal Rescue.

Ledcat has a rescue friend that is going to help us introduce her to our crew.  That's a bit of a worry for us, but I think it will be okay based on how she integrated into her foster home.  Here is Ana sleeping on top of her much bigger brother. 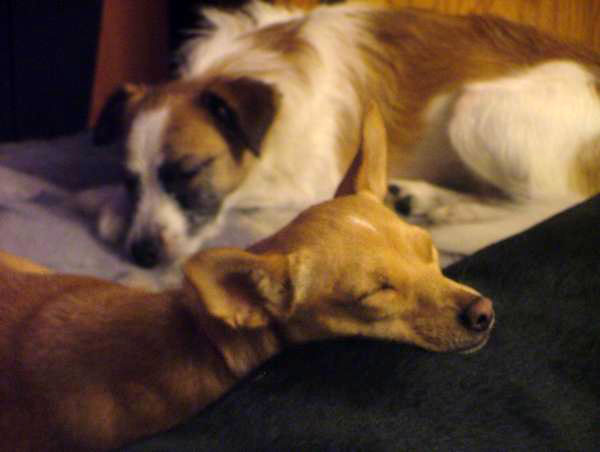 Her story is similar to Mona's even though she weighs 40 lbs less.  Actually, Ana weighs about half as much as Simon the cat so that should be interesting.  And I've always wanted a dog named Anna (close enough).  Plus, it keeps up the alliteration with Amadeus and Alexander.

If everything goes okay, I'll be blogging about integrating Ana into our family over on Miss Mona's Blog.  As much as we miss Mona, we think she would want us to take in another dog in need of a home.