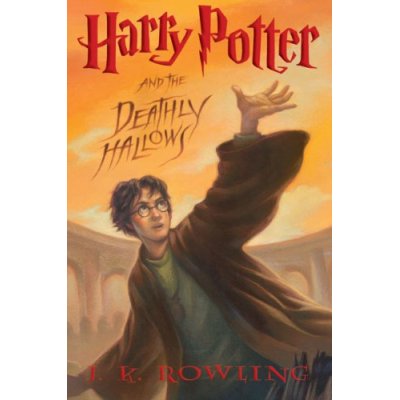 So I learned something new about my friend Sarah last week.  She's a Harry Potter fanatic. She came over to help me pick up my 75 lb dog crates — each btw — from the Federal Express office on Neville Island.  Because she has a truck.  And she's very cool and helpful n'at.

So after unloading the giant boxes, we were chatting and Harry came up.  I wanted to take her out to dinner on Friday to repay her for helping me, but she told me she had plans to go pick up the book at midnight.  We were both very excited to read the final book and swapped guesses on the potential plot twists.

I had planned to get the book, but maybe not right away.  Then Sarah says (with a straight face) “What if you log onto to leakycauldron.com and someone tells you the ending?”

Now, I must admit I've never heard of leakycauldron.com, but it turns out to be the official HP website.  So I wasn't too worried about the ending being spoiled on that front.  However, she got me thinking.  So off I toddled to Barnes and Noble on Saturday evening to find they had many dozens of copies left.  I clutched my treasure all the way home and spent the next 24 hours mesmerized.

I won't spoil it for you.  But I will say that I was RIGHT about a pivotal plot point.  I knew it.  A ha!

I'll miss Harry Potter, but the ending was very satisfying, so I'm happy.  I've yet to hear Sarah's thoughts.

ps: I should note that Friday night in Squirrel Hill, I was driven to the point of almost strangling the next adult I saw in a wizard costume.  With their own cloak.  The kids were cute, but the grown ups were a little scary.  Sort of like Johnny Depp as Willy Wonka.  Scary stuff.  When the buskers at The Manor wouldn't let me pass due to their whirling dancing and exaggerated fiddlin' movements, I decided to call it a night and take my hard earned monies home.