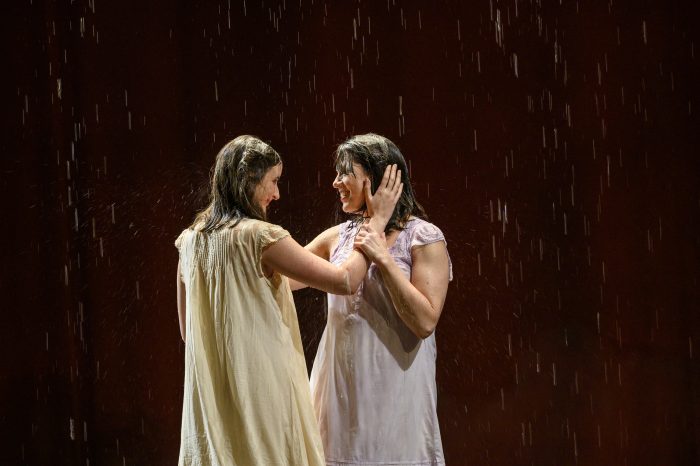 It feels really important to clarify that I am not a theater critic. This is my feedback and perspective on the production of Indecent at the Pittsburgh Public Theater. It is running through May 19, 2019.

So right off the bat I’m going to send you to read my Pittsburgh Current colleague Ted Hoover’s actual review here. Click to read and then come back to read mine.

Based on incredible true events, this story of a Jewish playwright and his resilient acting troupe unfolds with unexpected joy, beautiful stagecraft, and the contagious melodies of a live Klezmer band. In 1923, Sholem Asch’s first play opens on Broadway—a love story between two women set in a brothel—and scandal erupts when the entire cast is arrested for obscenity. Indecent unearths the perilous history of this groundbreaking work of literature, and reveals the way art can deeply connect us even in a world unravelling.

This is a lush, lyrical performance that I would count among the best plays I’ve ever seen. I was amazed at how much history I learned with storylines that resonate with contemporary reality just as much. A man ‘professing piety” while running a brothel? Anti-semitism? Censorship? The illustration of the power of art to sustain and uplift us? Generational shifts and the loss of community history? Sex work? People fleeing America because of political shifts?

All of that and more. This play within a play is full of gorgeous musical and dance numbers, a cast of 10 playing roles within roles with only the narrative projected on the curtain to help us keep track. Actors shifting accents 3 or 4 times in a scene as they move from their native Yiddish to varying degrees of success mastering English plus German, French, and more for this theater company that had toured the world before landing in New York CIty.

I was struck by the device of having the actors speak in their typical American accents to represent their Yiddish and using different degrees of broken, heavily accented English to represent their actual use of English in the United States. It was an interesting narrative device to consider language and assimilation. And they do speak in Yiddish although only one cast member is actually fluent in real life. They sing, dance, perform and live (and die) in multiple dialects, reminding me of the resilience of immigrants and refugees who can communicate in two languages – something I’ve never achieved.

The God of Vengeance is a play about religious bankruptcy set in a religious culture that is proud, steadfast, and accepting. The love of two women, one the daughter of a morally corrupt man of religion and the other a prostitute, is almost transcendent, especially the oft mentioned ‘Rain Scene’ which is so utterly lovely that most of the cast has watched it during every single performance regardless of their own duties. It was a beautiful and magnificent love scene.

Everything about this play was on the mark – the choreography, the costume and scene shifts, the singing, the backdrops helping us remain in context, the acting, and the interwoven stories of the the play’s characters, the acting troupe, and the general public.

Early in the show, a character comments how older men in her family are “stuck in the 19th century” while throughout the play we see literally how forgetting history (the pogroms of the 19th and early 20th century) is one reason the future is often more dim than we might hope. The same is true now – it is so important for all of us to remember the 20th century, when Europeans celebrates a lesbian love scene on stage while tyranny gained power. Those are realities people often choose to overlook.