I’ve written several blog posts commending a journalist who has recently been revealed to be a serial sexual harasser, to put it mildly. He has stepped down from his leadership role in his union and quit the newspaper he called home for many years. His name is Mike Fuoco. I’m shocked, but not surprised. I’m […] 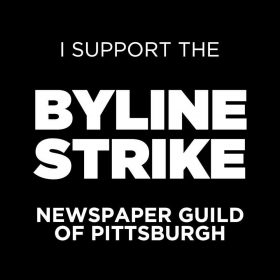 Reprinted in solidarity with the Newspaper Guild. ~ Sue NEWSPAPER GUILD OF PITTSBURGH INSTITUTES BYLINE STRIKE TO PROTEST CONTENTIOUS CONTRACT NEGOTIATIONS AFTER 12 YEARS OF ECONOMIC GIVEBACKS Until further notice, the 150 members of the Newspaper Guild of Pittsburgh, newsroom journalists at the Pittsburgh Post-Gazette, will be participating in a byline strike in protest of […]

What seems like a very long time ago, I contacted GLAAD about Pittsburgh media coverage of a story involving the University of Pittsburgh and the trans community. In fact, it was just April 2012 when I did that and one of the most responsive reporters involved was Michael Fuoco of the Pittsburgh Post-Gazette. His coverage […]