Ah, Mean Girls – the movie that has had a disproportionate impact on culture, including queer culture, since it debuted in 2004. And then there was the musical debuting in 2018 and it was also a big hit. That big hit comes to Pittsburgh starting this week for a run that’s already close to selling out every show. Mean Girls runs October 29 through November 3 at the Benedum. Tickets start at $60.

Mean Girls has legendary characters, but there’s only one Damian Hubbard – an openly gay white student with some of the most classic lines from the original movie. In the musical, Damian gets more storyline and some musical numbers. He’s much more than “too gay to function” – he’s fantabulous.  We all want to hang out with Damian and Janis (and secretly get their approval!)

Actor Eric Huffman was cast as Damian in the touring version of the musical and agreed to a Q&A with our blog.

Editor’s Note: “No response” indicates questions that Eric did not address. Typically, I simply publish with No Response as the answer and let readers draw their own conclusions. However, I am appalled that the questions he skipped are about LGBTQ topics, considering his character is a huge LGBTQ icon. I was informed (not by him) that he may not have been permitted to answer those questions by higher-ups in the production which is even more appalling given that the highest up person, Tina Fey, is also LGBTQiconique. I expect better from all of them. It really changes my perception of the show. I was going to take two young queer kids, but that didn’t work out. Perhaps that’s for the best.  Also, I know actors are busy, but so is everyone and my time deserves respect, too. As does yours, my readers. I’m really disappointed with Eric and the entire production team. Our kids and our adults who support this fandom deserve better. This commentary may ruin my relationship with the Pittsburgh Cultural Trust Broadway Series and cause future Q&A respondents to decline participating. That’s a necessary risk to say that every single person should always acknowledge the LGBTQ youth questions 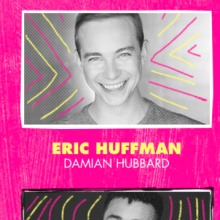 Your Name: Eric Huffman
Your Age: No response
Your Pronouns:  He/him

How do you describe your identity? I identify as a gay man.

What Pittsburgh creators – writers, musicians, poets, etc – have influenced your work? Is there anyone with whom you’d like to collaborate?  Everyone that comes out of Carnegie Mellon University.  I have come across many graduates of that program over the years, and they are all brilliant individuals.  Not just talented, they’re motivated and smart with an interesting point of view.  They’ve got something going on there!

Please tell us about the first LGBTQ person that you knew and what impact they had on your life. No response.

Why do you want to meet Neil deGrasse Tyson? He is one of my heroes.  I was a bit of a nerd in high school.  Two of my favorite subjects were calculus and physics.  Neil, being an astrophysicist, was someone I looked up to.  Beyond that, he has fascinating viewpoints on deep topics such as religion and meaning in life.  He’s opened my mind in many ways, and I would love the chance to actually meet him in person.  I would love that conversation.

There’s been a lot of attention to the evolution of Damian from an openly gay teen character in a supporting role to a more fully fleshed out contemporary gay teen and character in the show. What do you think happened between 2004 and 2013 to create this more open acknowledgement of the realities of queer teens? Can you point to any key media moments? I think a lot has happened in the world between when the movie and musical came out, no pun intended.  Back in 2004, I think it was brave to just have a gay character in the story.  He wasn’t the first, of course, but it was refreshing to see him in a popular teen film.  But we have come so far since then.  Many celebrities have come out as queer, and many more have shown their support for the community.  Not only that, there is a new generation coming on to the scene.  As easy as it is to complain about this generation’s obsession with social media, I have high hopes for them.  They seem genuinely open minded and open to discussion on many topics that previous generations couldn’t get behind.  I think they are the audience Tina is writing for now.  They are ready to see an openly gay character like  Damian take on a larger role in the musical.  Stepping into Damian’s shoes, I feel that support from the audience.  If you had told me 10 years ago that this character was possible, I’m not sure I would have believed you.  But here we are.

You recently said “Damian is just there to be a good friend and to do the right thing. And he happens to be gay.” This is a theme centered explicitly in the 2013 film GBF, written by Pittsburgh native George Worthy. There are strong queer supporting friends with unique storylines in everything from Riverdale to Derry Girls to Dear White People. Who are your personal favorite teen queer characters in modern entertainment media? I don’t know that I have a favorite teen queer character at the moment.  I’m just glad to see that they exist and that their existence is becoming more frequent.

What is your love song for LGBTQ youth? No response

Who are some of the younger openly LGBTQ artists in any genre that our readers should be following, but might not know about? No response.

Thank you, Eric. Welcome back to Pittsburgh!