November 8, 2017. The date four local women in politics announced they were forming a 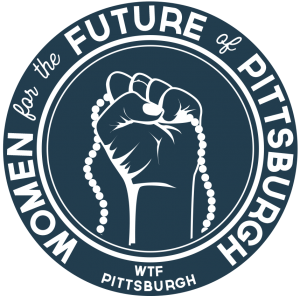 Political Action Committee (PAC) called Women for the Future of Pittsburgh with the unfortunate acronym of WTF. For clarity sake, I’m going to use WTF Pgh to avoid confusion with actual WTF references.

Women for The Future (WTF) provides financial support and guidance for progressive female candidates who are committed to disrupt the crippling political inertia in Western Pennsylvania and improve the quality of life for all in our region through bold and thoughtful leadership. WTF is committed to fostering a pipeline of women for higher office and gender parity in all levels of government.

It looked promising. The founding four include:

They are building up a big kick-off, invitation only event for December 11, 2017 to launch what they say is a critical tool to electing more women.

November 18, 2017.  An email is sent out from Chelsa Wagner urging people to support the candidacy of Conor Lamb as the Democratic nominee to replace former US Congressperson Tim Murphy (R)  Conor Lamb is a 32 year old white male cisgender heterosexual Catholic attorney with no campaign experience and no history of holding political office. It is important that Lamb is anti-choice. He uses language like ‘uphold the law of the land’ which is definitely code because as a lawyer, he has to uphold the law of the land, much less as a legislator. Sigh.

Among those contending for the nomination were two women. Gina Cerilli is a Westmoreland County Commissioner. Pam Iovino is a former Veterns Administration official.  Cerilli isn’t exactly a good candidate, but take a look at this write up of Iovino

Iovino, a Navy veteran, also entered the race before Murphy resigned. She has served as assistant secretary at the Department of Veterans Affairs in George W. Bush’s administration. A self-described moderate Democrat, her biggest priorities are health care, jobs and veterans affairs.

Iovino has raised the most money of any candidate ($32,000, with only $2,700 from herself) and she has hired Matt Merriman-Preston, who just headed Pittsburgh Mayor Bill Peduto’s re-election campaign. In turn, she has had an extremely active campaign, including an active social-media presence, holding many meetings all over the district, and issuing attacks on Saccone and other politicians.

Early this month, she said in a press release that the Republicans’ tax bill (which passed the U.S. House this week with support from all Pennsylvania GOP congressmen) will “hurt families from Whitehall to Waynesburg. Families throughout Southwest Pennsylvania, who desperately need tax relief, should not lose their deductions and pay more to fund tax cuts for corporations.”

She has also released a video ad (see above), which has garnered praise from political reporters in Washington, D.C.

Or read this from Chris Potter.

Two women running in a field with five men and Chelsa opted to support a man.

There are plenty of (mostly white cis male) folks telling me that Lamb was clearly more qualified, not really anti-choice, has the potential to win (??) and all sorts of the other polarizing whip the women into line on the voting rhetoric we hear time and time again. That’s annoying enough, but it is to be expected from Southwestern PA Democratic men. The mansplaining is strong in this region, arguably the most socially conservative region of the Commonwealth. They blame women for not electing Hillary and blame Hillary for not beating Trump. OK, fair enough, people have opinions on these things.

But Chelsa Wagner wants us to invest our money in her PAC then turns around and endorses a man over Pam Iovino? What the fuck, indeed.

I reached out to WTF Pgh and was told that they have no statement and are focused on their upcoming event. I was directed to contact Chelsa, but informed there are no existing bylaws around conflicts of interest among WTF Pgh endorsements, organization or personal.

I don’t really need to call Chelsa. She’s smart enough to know that a lot of women will still invest money in the PAC because we are running out of options to change the landscape. She wouldn’t have issued an email at 6 PM on the Saturday night before the endorsement meeting if she didn’t feel confident it would not hurt her. Chelsa is a smart, well-educated, experienced person. She is no nobody’s fool. I am confident she knew exactly what she was doing.

Chelsa is also an attorney who appparently hasn’t signed any legal documents for the PAC that prevent her or address how she should make personal endorsements for white cisgender heterosexual Catholic men running around women. We could analyze Chelsa’s motives until the end of the time.

My issue with a PAC asking local women to invest in a concept designed to elect more women being led by a woman did the opposite of that and it a really big way. If Chelsa couldn’t hold off until the by-laws are in place to pull a maverick move on HER OWN PROJECT, what is doing to happen next?

Maybe the by-laws should come before the fundraising event? So we know what we are getting and what we are investing in as women in this region. So we make informed, transparent decisions about our resources which inevitably have to be pooled to dislodge the good-old-boy system. Get your foundation built before asking for money. That’s organizing 101.

Rather than that sort of actual and tangible information, we are left to consider that ten days after a public announcement and references for upcoming fundraising event, the founder who is absolutely the heavy hitter on this team endorsed a man over a qualified progressive woman.

What good does it do us to invest our money in a PAC when Chelsa went rogue ten days after announcing it? Ten days! Seriously, it is not a wry or funny question. When you are asked to donate time or money to this PAC, you should seriously stop and think WTF? before you make a decision.

This post is part of our 30 days of blogging, 30 new donations effort in November. If you appreciate bloggers addressing topics such as this one, please consider a donation. Thank you.

Here’s an image file of the email in case you can’t access the link: 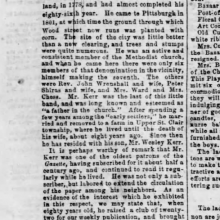 Scott Township Has One Chance to Address Transphobic Culture of Commissioners