If you could clone one element from another city you’ve visited — a building, a cultural institution, a common street food, etc. — and bring it back to your own hometown, what would it be?

I actually put together an entire plan to do this – to study best practices in LGBTQ municipal equality via a LGBTQ Task Force. I have some general impressions of things that would be a good fit for Pittsburgh, but I’m not a municipal planner and I’m not a policy expert. I am, however, intelligent enough to see that Pittsburgh is slipping behind the curve when it comes to municipal equality AND to recognize how other cities innovation is going to make it difficult to find those new residents necessary to our survival.

Here’s a few reasons why it remains critical

In 2012, Pittsburgh was not included in the HRC Municipal Equality Index because the statistical size of our LGBTQ population didn’t meet the criteria – most of our LGBTQ folks live outside the City proper. In 2013, the Index was expanded to include the largest cities in each state, but Pittsburgh garnered a score of 72 out of 100 with almost no points for any transgender related indicators. That’s pretty appalling. The index isn’t perfect or flawless, but it does suggest that the myth of “Pittsburgh and Philadelphia with Alabama in the middle” is a myth and not an accurate reflection of Pennsylvania. Not at all. 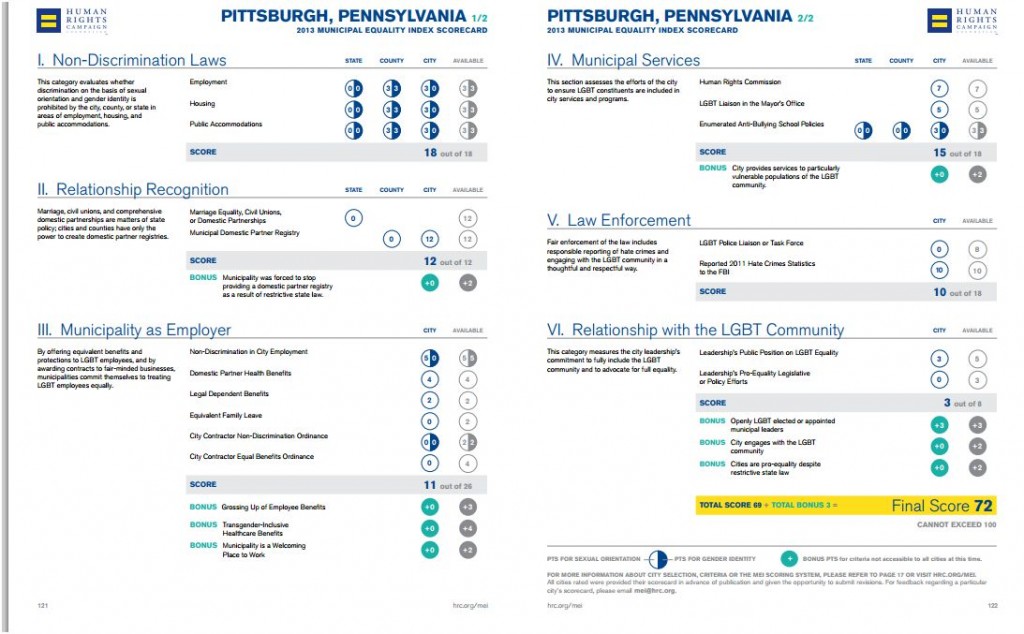 This week, Vocativ released its Queer Index, ranking the top 35 LGBTQ friendly cities in the US. Once again, Pittsburgh didn’t rank. But Chattanooga, TN did. Consider that for a minute. Harrisburg ranked 11th and Philadelphia came in 28th. In the HRC rankings, Philly scored a 100 and Harrisburg a 76. The Queer Index is not exactly the best measurement, but it shouldn’t be dismissed especially if we are going to tout every time we make a less data-driven “best of” list.

Still, I can’t say with true certainty which elements I would bring to Pittsburgh to create more equality because I am not fully informed on what that would require. That’s why I proposed a Task Force with very focused appointments of people with the skills to gather and interpret this information with regard to best practices. I even found a funder! Hopefully, this will become a priority. I would use my wish to launch the Task Force.

Municipal equality in Pittsburgh becomes even more precious and vital to our regional survival as the landscape statewide and nationally continues to change. We are winning the battle for marriage equality, but we aren’t going to win on non-discrimination statewide or nationally anytime soon. We are winning in the public opinion polls, but US House Majority Leader Eric Cantor just lost his primary battle to someone even more right-wing. We are winning the support of Pope Francis, but lawsuits like Hobby Lobby and the Little Sisters of the Poor present real challenges to our understanding of religious liberty.

To put this in perspective, consider this story out of Westmoreland County where the County Commissioners rejected a request to issue a proclamation for Pride Month, opting instead to support a generic diversity proclamation.

The proclamation issue was discussed on Tuesday during the commissioners agenda meeting, which Controller Jeff Balzer attended.

Balzer lashed out at the proposal.

“We’re going to have gay months? Come on. They are not a challenged people,” he said.

I’d say he disproved his own statement by simply opening his mouth in the first place. He does however succeed in reinforcing his alignment with State Rep Daryl Metcalfe of Butler. Frightening to be surrounded by so much hate and intolerance.

Pittsburgh can do better. We must do better – a 2013 poll by Equality PA found that Southwestern Pennsylvania has the LOWEST approval ratings for statewide non-discrimination protections. Lower than “Alabama in the middle.” The lowest. Pittsburgh is the regional leader and must step up soon to challenge these misperceptions and help lead the region into the 21st century.