Since yinz seem to really like my soap opera posts, here’s another one that I’ve been ruminating on this week.

Lucas Jones is coming back to General Hospital. That’s a reasonable conclusion based on the fact that’s already involved in a storyline even off the canvas and the frequent sudden mentions.

Lucas is the adopted son of the deceased Dr. Tony Jones and the still-living retired nurse Bobbie Spencer (they divorced before Tony died.) Lucas was the biological son of Cheryl Stansbury and mobster Julian Jerome. Bobbie illegally adopted Lucas, had to give him back to Cheryl, then Cheryl died and designated custody to Bobbie and Tony. The other importat fact is Julian never knew about Lucas and since he was presumed dead, no worries on that front. 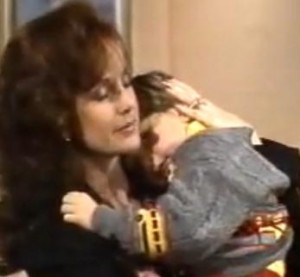 Lucas as SORAS’d to a pretty typical teen and after crushing on his step-cousins Maxie and Georgie, disclosed that he was gay. Bobbie didn’t take it well until her brother Luke set her straight (no pun intended). Tony handles it just fine and before he died, gave a heartfelt blessing to Lucas.

Lucas soon went away in 2006 because the writers had nothing to do with him. We thought Bobbie was still in town but it turns out she moved to Portland with Lucas. He was almost never mentioned until the 50th anniversary when Bobbie returned and made repeated references to him.

Since then, Julian Jerome has returned in disguise as media mogule Derek Wells. The only person who knows his identity is his sister, Ava Jerome. The Jeromes are after Sonny Corinthos empire. Sonny and team are suspicious of Derek’s identity and Duke Lavery is working for “Derek” but I think he’s trying to infiltrate. Oh and Sonny’s 19 year old son married Julian’s niece/Ava’s daughter, Kiki, but is now shacking up with her mother, Ava. His other son Michael is living with Kiki. Got that?

Meanwhile, little Danny Morgan had cancer and Derek was a surpising donor of bone marrow. Danny’s grandma Alexis had a one night stand with a Julian which resulted in the birth of Sam(antha), Danny’s mother. Alexis is trying to figure out if Julian Jerome is the father. She thinks Julian is dead. Derek has figured it out and is sort of romancing Alexis. Alexis learned that Lucas is Julian’s bio son and asked Carly Jax to contact her brother for a DNA swab (apparently Lucas knows he is adopted.) The sample arrived and tests are being run. It’s just a matter of time until Alexis & Sam learn the truth. When they will learn that Derek IS Julian is another matter. So that’s a big drama because Alexis is also the mother to Sonny’s daughter Kristina and the mother to Molly via mob lawyer Ric Lansing.

See what I mean? Lucas is the key to determining Sam’s paternity. His adopted sister Carly has been singing his praises ever since Alexis told her the truth and asker her to get the DNA sample. Lucas (and Bobbie) think Julian is dead so they aren’t worried on that front. Sam is about to inherit a younger brother and Danny gets another uncle.

I think hell will break loose when Julian/Derek realizes he also has a son that was kept from him. He seems to understand that Alexis had no choice because her father was a crazed Russian/Greek prince who controlled her life. As happens to many of us.

Here are the interesting storyline possibilities:

And the big one – Julian learns Lucas is gay. How will that go down?  I presume Sonny knows Lucas is gay and has no issues, especially because Carly would kill him since she apparently loves her never-mentioned brother to pieces. I can’t see Sam having any issues with that fact. Ava will use it to her advantage. But how will Julian react? It’s not like Lucas can be sent to camp or anything – he’s a 20 something man.

So that’s the drama. Lucas is going to have a storyline that might encompass the fact that he is gay OR it might not.

There are two other gay men on the canvas – nurse Felix DuBois and lab tech Brad Cooper. Brad has a mad crush on Felix who is fighting his attraction to Brad because he doesn’t like his ethics. Neither is a major character or connected to a core family so adding Lucas to the mix makes sense. Felix is friends with Carly. Both are a little stereotyped, but as I’ve said before – that’s how the soaps roll in general. Both are lonely. Both “prop” other stories. But it makes sense that they’d connect since they work together. That’s not a stretch.

There’s no rumor that Lucas has been cast yet so it probably won’t be until the New Year that he appears. That seems a bit odd, but the canvas is pretty full – perhaps he’ll return after the mob war breaks out? I thought the revelation about having another sister would bring him back but we’ll have to see. Since Carly and Sam are between 35 and 40, its a good guess Lucas will be slightly SORAS’d to 30. Bobbie has suggested he’s a bit of romantic player so I’m seeing a combo of Luke Spencer with Frisco Jones (adopted uncles) plus a little broodiness? I wish he were a doctor, a new version of Patric the great lover. We need more doctors and the soaps in general need established adult gay characters intead of the teens coming out.