Today, winter came to Pittsburgh for a weekend. It is cold and snowy. So we planned ahead – tonight’s activities feature eating potato chips and watching Season Two of Downton Abbey on DVDs from Netflix. In bed … seriously, I’m not just saying that. 🙂 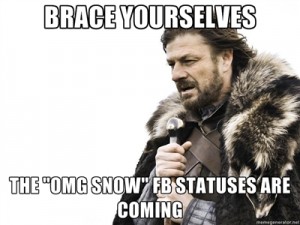 So a fun hashtag that develops is #SNOMGPGH because half of the population forgets that we are technically a Northern city and panic during inclement weather. The other half now tweet about it. During the last big snowfall on December 26 – which we anticipated for 4 days – it tooks us over an hour to drive on roads that were untouched by plows. We aren’t sure if they had the day off or what but since it was a state road (Parkway – our name for the US Highway 376), I couldn’t help but wonder about our state government. Ah well …

Today, I opted to drive to the local grocery store for a few items early in the day. It was a full snow by the time I made it outside so I expected hell in the grocery store. I was not wrong – carts flying everywhere, people yelling, long lines, and lots and lots of gallons of milk. Half gallons, even a few pints. I circled the store twice and saw employees refilling the milk display both times. Wow. I did not purchase milk.

I did however realize I had a few soon-to-expire electronic coupons on my store reward card so I decided to make some non-essential purchases. So that was in fact was me in the self-checkout line with tote bags, coupons AND 75 cans of pet food. You can imagine how exciting it was. I was feeling pretty stimulated when I left – especially when I had to almost drag my cart across the unplowed parking lot. Still – I did save 20% off my total and had enough totes for all of my purchases. I was excited. Then I spent 30 minutes driving 1.5 miles home. Ha.

By the time I claimed my parking space, unloaded and swept a path off the back deck for the dogs … i was actually still not tired. I felt energized by the whole experience. Perhaps because THIS IS WHAT IS SUPPOSED TO BE LIKE IN JANUARY.