How do you describe your identity? Bisexual, Non-Binary Scientist and Educator

Please describe your coming out experience. Where did you find support? What challenges did you face? I have never come out in a general way. I have always felt that gender and sexuality are private and not necessarily something to declare unless it comes up in conversation or has a reason for being addressed. The most difficult part of this has been the lack of community. Since I have never come out as a big reveal or to large numbers of people at once, and do not feel compelled to talk about it much I did not have connections with the LGBTQ community until well into adulthood.

How would you describe yourself NOW in terms of “being out”? I am very similar for the most part. I still only discuss my gender and sexuality with those who are close and trusted or if it comes up in conversation. I have, when time permits, been part of the local community since coming to PA but I am not extremely active.

Tell me about the first LGBTQ person whom you met. What impact did they have on your life? My uncle was gay. I saw a lot of his trials as an HIV+, gay man in the 80s, however, I was too young to understand that some of the hardship and discrimination he endured was due to having a boyfriend. He was open about his life and I understood discrimination and how mean people could be before I endured anything myself. I also cherish his presence because I grew up in an environment where heterosexual and homosexual relationships were visible and homosexual was not considered deviant or otherwise negative.

Past or present, favorite LGBTQ character or creator in television, film or literature? Please tell us why. This question is disappointing and limiting. I have always run into the stereotype that LGBTQ individuals are all in the arts and it has been an isolating issue for me as someone who is heavily into the sciences, though I do artsy things as well. Representation and discussion are very important. We always talk about LGBTQ in the arts, in music, and movies but rare is the talk of mathematicians, biologists, doctors, and many of the pursuits most would consider “intellectual”. It is so ubiquitous that there is suggestion that LGBTQ individuals may be more likely to leave STEM degree programs or not even join those programs at all.

That being said, Alexander Von Humboldt is my favorite. He was one of the most renowned naturalists of his time and influenced many fields of science. His influence has left a legacy of places, animals, and natural phenomenons bearing his name. I came across him first as an influence on Darwin. It wasn’t until I read several biographies that I realized one of the scientists I adored was likely to be part of the LGBTQ community.

How do you stay informed about LGBTQ issues? Social media, speaking with others in the community, research journals

Describe your geographical community. When I was growing up LGBTQ was not addressed much and I did not grow up with a concept of community or friendly vs unfriendly areas based on LGBTQ status. As an adult, I find that the city I live in is variable. One small community might be completely safe and three streets away might be very discriminatory and possibly even dangerous for an LGBTQ individual. Unfortunately, those who would discriminate or be violent toward LGBTQ people are not isolated in one place. Instead they are sprinkled throughout most of the communities.

Have you ever experienced discrimination based on your identity? Specifically, in a job setting, when applying for housing or while in public.  When I was in my teaching degree program I was told many times not reveal my gender or sexuality (as well as other personal characteristics) because it would prevent me from gaining employment. These sorts of comments came from people within my program, in my co-op schools, and from peers. It was very stressful for me, particularly when I would reach out to LGBTQ students and became fearful that it might effect my career to support these students.

Have you experienced microagressions based on your identity? Think everyday indignities & slights that you experience, but would not characterize as discrimination. Please describe in your own words.   I find the strict adherence to what a LGBTQ person should look like creates a lot of daily microaggressions. I think there is a lot of assuming still based on appearance both outside and within the community. Constantly correcting can become exhausting and letting it go uncorrected is internally disappointing.

Tell us about your access to health care in Western PA. Has it been LGBTQ competent (or not?) Oddly, I have rarely had a PCP ask about my gender or sexuality. I am not sure if this is negative, incompetent, or simply a lack of understanding of community diversity on the part of the provider. OBGYNs in the area have asked about my gender and sexuality. I feel I have been lucky to have had open minded OBGYN services, in part, thanks to Planned Parenthood and their policies.

Are there issues impacting your LGBTQ neighbors that aren’t visible or part of the local dialogue? We have a large refugee/ESL population in my area. I am not sure if there are supports in place to provide LGBTQ services to these communities. It is possible that I am just not aware of the services if they are available.

What would you like to see elected officials do to improve life for LGBTQ Pennsylvanians? Address the issues of homelessness, particularly for youth in the LGBTQ community. Officials also need to be more aware of the diversity in the community across all types of standards: race, religion, gender, sexuality, socio-economics, ethnicity, and so forth so that LGBTQ issues can be addressed in a more inclusive manner.

Please share a lived experience, anecdote or fact about life as an LGBTQ person in your community.  A few years ago I had a conversation that made it much easier for me to talk openly. I was teaching families and two brothers, about 7 years old, got very excited about what I was doing so they went to get their mother. They came back exclaiming “He said we could do science too!” The mother saw me and looked horrified. She immediately apologized to me and corrected her boys to call me “she”. I don’t know why I decided to speak up at that moment but I simply said “You’re both right.” There was a moment of confusion but it led to, what I felt, was a very important conversation with the family about how someone can be more than just a boy or a girl.

Beyond discrimination, what other barriers create challenges for your LGBTQ neighbors? Openness or removal of the fear to be open. The one lesbian couple I know who lives near me was very hesitant and uncomfortable when I worked out that they were dating. I wonder how many others in my area live with the same kind of discomfort.

What LGBTQ friendly resources are available for your neighbors? There aren’t any that I know of in my boro/neighborhood though there are many in the greater Pittsburgh area.

What is your greatest hope for the LGBTQ community in Western Pennsylvania? That it will more completely accept, promote, and become proud of its diversity.


What can allies do to support your LGBTQ community? Listen and self educate.

How can gay men and lesbians support the bisexual, transgender and queer members of our community? Understand that accepting and embracing other community members isn’t threatening but empowering. We’re all in this together.

What motivated you to take part in this project? I haven’t spoken much publicly and I think it is time for that to change.

Finally, what question should I have asked? Please also share your answer. None that I can think of. 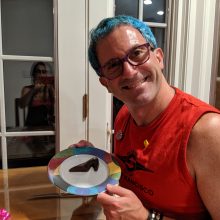 Ary, 53, Shares Their Experiences as a Nonbinary Gynophile #AMPLIFY 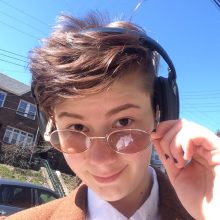 Bob, 24, is an autistic butch non binary lesbian. This is their story. #AMPLIFY