How do you describe your identity? I consider myself bi-sexual, but I don’t think I will ever be in a relationship with a man again. My relationship “works” so much better now.

Please describe your coming out experience. Where did you find support? What challenges did you face? I came out to my friends in college when I was around 20, that was a pretty neutral experience since I was in the art program, and most of my friends were pretty open minded. There were a few girls I dated, but nothing serious. My parents knew based on me accidentally leaving my lifejournal account logged into on my parents computer. I then met my ex-husband and we were together for nine years. It wasn’t until after I was divorced and dating my now girlfriend that I came out to my mother when we were on a trip to California together. She said she had suspected since I was much younger. I don’t think my parents felt as if my girlfriend and her son could really be part of their family, but they have warmed up since and we spend holidays together now. I waited to introduce my mother to my girlfriend until I was on the way in the operating room to have my gall bladder out. That was probably one of the best things I could have done, my mother saw my girlfriends love and concern for me as my surgery took twice as long as it should have. My parents have a deep religious catholic faith, but they are open and love and me unconditionally. I do find that public opinion since the first time I came out was much different in 2002 is much than in was 2012. In 2002.

How would you describe yourself NOW in terms of “being out”? I am totally out to my parents and co-workers. Extended family not so much, but I don’t really spend a lot of time with them. My girlfriend and I are always conscious of her son and his situation though. He goes to a very open private school right now, but as he gets older and transitions back into public school we worry about him getting made fun of.

Tell me about the first LGBTQ person whom you met. What impact did they have on your life? I went to girl scout camp outside of pittsburgh, one of the lifeguards, her camp name was Sky was definitely LGBTQ, it was the first time I knew it was ok to be different, and not necessarily gender conforming.

Past or present, favorite LGBTQ character or creator in television, film or literature? Please tell us why. Not sure I have one, I watched Ellen off and on when I was growing up. I also loved Rosanne and remember the episode where she went to a gay bar. I haven’t really found anything contemporary that I identify with.

How do you stay informed about LGBTQ issues? Facebook

Describe your geographical community. Always rural. Sometimes I consider moving to Pittsburgh, but the traffic just gets me. I haven’t had any specific instances of unfriendliness. My girlfriend says she has experienced more, but she has lived in this community on and off all her life, and people notoriously know her. I can also be pretty oblivious. Like I said, we are afraid for me to get involved in whatever school her son ends up going to, and I may just have to play the act of Aunt Krissy.

Describe your local or regional LGBTQ community. I dont feel like I have one, or if there is one, I’m not part of it.

Have you ever experienced discrimination based on your identity? Specifically, in a job setting, when applying for housing or while in public.  I have never been a fan of PDA, even when I was married to a man, so I don’t feel like I am shoving my identity into anyone’s face. If I have been discriminated against then I have been oblivious to it. My partner and I work for the same company that is located in Pittsburgh, and our bosses and colleagues are all below the age of 40. I think we were lucky to have found a landlord who we are in a rent to own position with, that didn’t care, but I think landlords care more about who can pay. I can totally imagine a situation where some really religious person would discriminate and legitimize it to themselves using their religion.

Take me back to 2002 and it was a different story, at the time I had short hair and wore men’s cloths, I was misidentified all the time! One time when I was a freshmen in college one of the girls on my floor told me that “this was the women’s restroom”! (I wear a 44D bra!) I got carded at a bar and the bouncer thought I was a dude. I scared an old women in the Perkins bathroom who thought I was a man. Not sure I would have been more comfortable in the men’s room though!

Tell us about your access to health care in Western PA. Has it been LGBTQ competent (or not?) I haven’t had any issues that deal with my sexual identity.

Are there issues impacting your LGBTQ neighbors that aren’t visible or part of the local dialogue? We are scared because of the hate crimes that have been committed since our latest president came into office, but for the most part people are friendly, or just don’t care.

What would you like to see elected officials do to improve life for LGBTQ Pennsylvanians? Consider a state wide anti-discrimination bill.

Please share a lived experience, anecdote or fact about life as an LGBTQ person in your community. I am an LGBTQ step-parent, and I often find myself in the role of “father”. When I picked up my step-son from school a few weeks ago he described me to his classmate as his “second parent”, not the third! His father is very much in his life day to day life, and I never want to supersede him in anyway or form. I think the most teachable thing from my experience is how to operate in a blended family. My girlfriend and her son’s father have structured their relationship in the best interest of their child, and that is such a hard thing to do. People can be so spiteful to each other.

Beyond discrimination, what other barriers create challenges for your LGBTQ neighbors? Now that marriage is legal I can’t really think of any.

What LGBTQ friendly resources are available for your neighbors? No idea.

What is your greatest fear for the LGBTQ community in Western Pennsylvania? That some lunatic will recreate the scene in Orlando. That the rights we have fought for will be taken away.

What is your greatest hope for the LGBTQ community in Western Pennsylvania? That someday our children won’t have to view themselves as different than any other child with loving parents.


What can allies do to support your LGBTQ community? Stand up if they see someone being discriminated against.

How can gay men and lesbians support the bisexual, transgender and queer members of our community? Be upstanding citizens!

What motivated you to take part in this project? I like reading and knowing that there are others like me out there. I hope someone can identify with the way I feel.

Finally, what question should I have asked? Please also share your answer. This was pretty thorough! 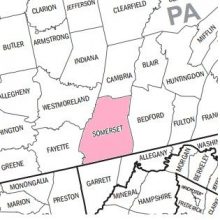