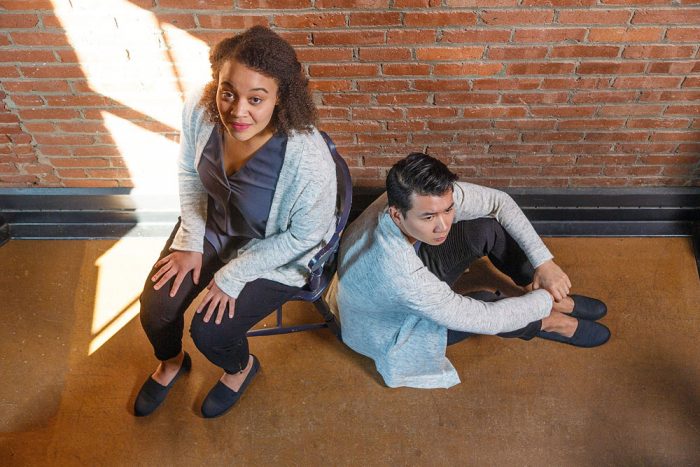 I feel comfortable commenting on writing, though — I think I’m pretty good at writing — and I know a lot about being transgender, so I’m going to do the best I can.

I’m sure composer Laura Kaminsky and librettists Mark Campbell and Kimberly Reed have done they best they can, too, with “As One,” an opera in three acts which is making its Pennsylvania debut this weekend at the Pittsburgh Opera.

Unfortunately, they’ve fallen short with this story of Hannah, a young trans woman raised as a boy. I think they’ve made a wonderful effort, but effort isn’t enough.

Happily, Pittsburgh Opera’s production of the piece, in the opera company’s intimate Strip District theater space, is just about as good as possible. (Guests were allowed to see a preview of “As One” on Thursday during a dress rehearsal.)

The leads — Brian Vu and Taylor Raven, playing, respectively, the male and female sides of “Hannah” — are superb. Vu and Raven play Hannah together, at the same time, and usually on stage simultaneously. Sometimes, they have to to blend their powerful voices and imitate one another’s phrasing; at other times, one has to silently react, while the other is in the foreground.

I can’t imagine how challenging it must be, and it’s to Raven and Vu’s credit that they do it so well.

The string quartet, conducted by James Lesniak and featuring violinists Rachel Stegeman and Charles Stegman, violist Jennifer Gerhard, and cellist Kathleen Melucci, does a wonderful job with Kaminsky’s score, which is excellent — by turns, her music for “As One” is gentle, brooding, manic and contemplative.

And Chen-Wei Liao’s minimalist set — his first for the Pittsburgh Opera — is effective. So, too, is Todd Nunn’s lighting design.

My problem is with Hannah’s story — in fact, I’ll go so far as to say the very idea of “As One,” as conceived by Kaminsky, is a problem.

As trans people, we have for decades fought the popular misconception that we are suffering from multiple or split personalities — until recently, trans women were depicted in movies and TV shows as serial killers who donned a wig and female clothes to commit our crimes, then went back to male behavior and dress when we were behaving “normally” — and I’m using those scare quotes on purpose.

You remember Norman Bates in “Psycho,” and Bobbi/Dr. Robert in “Dressed to Kill,” right?

Now we have “As One” resurrecting this old trope of a transgender person being one person with two personalities who is having trouble integrating her different personas.

I’m sure some transgender persons do feel like they’re split personalities — but I certainly don’t.

And then there’s the libretto itself. While Kaminsky’s music takes flight, the words of her librettists (one of whom is transgender) often land on the stage with a thud.

As a trans woman, I’ve read many, many LiveJournals and Tumblrs and web “transition diaries” written by other transgender people.

I even kept a trans blog myself, for a while, until I realized I had very little new or interesting to say about being a transgender male-to-female person. Unfortunately, neither, in my opinion, does “As One.”

“Norway,” which closes the third and final act, sings of “transcendence,” but the libretto of “As One” never transcends an average “transition diary” LiveJournal.

I’m encouraged by composers and librettists who are writing modern operas and moving this ancient artform into the future, and there will be future operas, I’m sure, featuring transgender characters. I’m sorry to say “As One” is a serious attempt, but a seriously flawed one.