From 365gay.com comes word that the State Supreme Court will let a 1913 law stand that prohibits clerks from issuing marriage licenses to people from states where their marriage would be illegal.  Originally passed to prohibit interracial marriage, the law has been used to prevent non-Mass. same-sex couples from marrying.

According to Pam's House Blend ...The next step, the court indicated, is to sent the case back to the MA Superior Court to review whether gay civil marriage is legal in Rhode Island and NY, where the matter is winding its way through the courts in those states.

From the local front, two letters to the editor in the Post-Gazette.

Amy Beisel of the Pennsylvania Catholic Conference opines that a one man/one woman marriage is unique and special, as well as fundamental to the well-being of children.  Same old drivel dressed up pretty to defend marriage from a nameless threat.  And I'm sure the hundreds of thousands of Pennsylvania families that don't meet the one man/one woman threshold love being shoved into second class citizenship along with us homos.  Very Christian of you Ms. Beisel ... good to know you are working hard so your future husband can make decisions in your best interest.  :-)

Ms Beisel -- can you please spell out how ... HOW ... gay marriage will impact your marriage (or future marriage)?

Just a quick hurrah that professional wrestler Chris Kanyon has come out and given a substantial interview to the Windy City Times.  Does it matter?  Sure and here's why.

Kudos to you, Chris!

The United Church of Christ has had another inclusive ad rejected by all major networks for being too "issue oriented."  The point of the ads is to reach out to people who feel alienated from church. You can view the ads here.  They are hysterical. 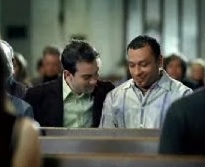 Interestingly, the networks embrace the Christian Right -- which is decidedly NOT mainstream Christianity -- while shutting out a simple message like "you are welcome at our church."  Hmmm ....undoubtably the liberal media bias is at work here.

BTW, I did a search on the UCC homepage and found 20 congregations within 20 miles of downtown Pgh.

Here's something new to read ...

The American Family Association of Pennsylvania has some problems with the Pennsylvania Human Relations Commission.  They claim that Chairman Stephen Glassman is using his position as a "bully pulpit" to promote the homosexual agenda.

Mr. Glassman's sins include meeting with homosexual groups to discuss the anti-marriage amendment and working with local municipalities to add sexual orientation and gender identity to their non-discrimination policies.  Glassman was appointed to the HRC by a Republican (Schweiker) Governor in 2002, nominated as chair by Governor Rendell in 2003 and is currently the highest ranking openly gay appointed official in Pennsylvania.

Imagine the Human Relations Commission advocating that all people be protected from discrimination!  What a horrible abuse of power!

The AFA-PA wants proof that homos are being discriminated against in housing, employment and public accomodations.  They should visit the HRC website which includes statistics on bias complaints.

Other critical concerns the AFA has about the homosexual agenda in Pennsylvania:

2.  Homosexual activists in Allentown used threats and intimidation to acquire signatures on a petition to add sexual orientation and gender identity to the human relations ordinance.

3.  In Allentown, men can wear dresses and shower with women in the workplace.

So the AFA-PA wants Governor Rendell to reign in Glassman and make him concentrate only on legally protected classes, as sexual orientation and gender identity are not included in these classes.  My question is what the AFA-PA is doing to ensure that good Christian family members who fall into those included classes are being protected?  Are they ensuring that churches across the Commonwealth are fully accessible to the disabled?  Perhaps holding bake sales so churches with limited resources can afford to remodel in order to be fully welcoming of ALL peoples?  I'm guessing that their all-consuming obsession with homosexuality does not allow for these minor distractions.

Furthermore, the AFA does not seem to be doing much of anything for ANY people who fall into the following classes - race, color, familial status, religious creed, ancestry, age, sex, national origin, disability, use of guide or support animals because of the blindness, deafness or physical handicap of the user or because the use is a handler or trainer of support or guide animals.

Are they on the forefront protecting pagans from religious discrimiation?  Nope.  How about helping older adults pay for medicine AND food?  Nada.  Any action to assist immigrant farm workes in the middle of Pennsylvania?  No.

While Pennsylvania families struggle to find decent jobs, put food on their table, pay for health insurance, keep up with property taxes and a myriad of other daily challengers, the AFA-PA has defined homosexuals as the biggest threat to family welfare.  Headed up by Stephen Glassman who tricked a Republican into appointing him so he could spread his homo agenda willy nilly throughout the Commonwealth.

You can join the AFA-PA email list [email protected] to stay abreast of the latest.

If you loved Sonji Woodruff at the Steel Queer N' At show come see her in an even more intimate setting.

(She was the artist who played after intermission with cello...so hot, and we're so damn lucky to have her in Pittsburgh...)

Lots of Steel Queer N' At Hotties will be reading...come get your peep on.... 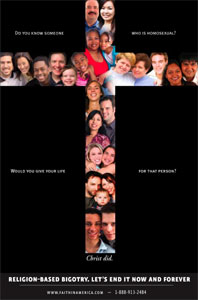 Do you know someone who is homosexual?  Would you give your life for that person?  Christ did.   End religious based bigotry now.

The Tribune-Review's Mike Seate enjoys going to True (he doesn't name it, but we all know that's the place he's describing).  He also enjoys the reactions of his straight friends to being in a gay oriented bar.

Seate does a nice job tweaking the social homophobia of men who delusionally believe they are the sexual target of any gay man in their vicinity.

My straight friends need to realize that, despite overestimating our own allure, most often, nobody in any bar -- gay or straight -- is checking us out. With our beer bellies, beard stubble and constant banter about motor sports and marriage, we're so obviously straight it would take The World's Most Clueless -- or desperate -- Gay Man to send a free drink sliding down the bar in our direction.

Actually, he does describe a few gay men that I know.  However, his point is well made.  Perhaps he should take the Trib editorial board out for a round?

Some random notes...Rep. Randy Cunningham's loot came on the auction block last week. You remember Randy? The gentleman who ranted about the evils of gay people but then accepted bribes. The last time I checked, stealing was a big one in the ten commandments, but, uh...being gay ...WAS NOT.

Also, some observations about who might vote to take away gay folks right to marry. The pigeon sniper. The man who was seen walking on the roofs with an air rifle that looked like an assault rifle? Shooting piegeons. The person who locked down Pittsburgh for several hours and then, incredibly, tottered back to Fayette County. He can marry. He can breed. And they say gay people are a threat to society?

Finally, I attended the ACLU's annual meeting on Sunday and heard Randy Forrester speak. Seems among urban gays there's still a complacency about gay rights. A belief that being gay is becoming routine. Accepted. Let me say this, and not as eloquently as Mr. Forrester. The religious right, the self-righteous hypocrites that they may be, are coming after you. They don't like you. They want to establish a theocracy and, guess what? It won't include you. So wise up and get your head out of the sand.

Finally, I am also amused about the religious right's collective panties in a knot about the Afghanistan Christian that the Afghanistan government wants to execute. Bush came into that country and a "democratically" elected government was established. And this same government wants to execute this man. Not that I agree, but what did they expect? There also going after women and...gay people but you don't hear the focus on the family squawking about that, do you?