The songwriter of Willie Nelson's "gay cowboy" song was on NPR's What Do You Know this weekend.  He's was wryly funny discussing how this song emerged from the Urban Cowboy phase of the early 80's.  He also pointed out that Brokeback Mountain is about sheepherders, not cowboys.  LOL.

So I was waiting for Aaron MacGruder to go there.  Its too delicious for him to resist skewering.  I say that with all the love a middle class white lesbian can show for this strip. Sure enough, this week it happened.  Click on strips for the details.

Last night, your intrepid correspondent headed out the turnpike to Seven Springs (aka the middle of friggin nowhere) for an evening of laughter and yuks at a charity fundraiser for the Pittsburgh Foodbank. Our goal was to see KDKA talk host and friend-of-the-lesbians John McIntire as well as a bunch of other funny people of whom we had no knowledge.

When I drove past the tee pee themed barbecue restaurant, I should have noticed the little red flags.

That place was a literal cess pool of yinzers and yinzerette wanna bes.  At least 75% of the audience had their glory moment in 11th grade and kept the hairstyle to prove it.  The biggest laugh of the night seemed to be reserved for the buffoon imitating callers to WDVE rather than the highstyle humor of Alan Cox and other Pittsburgh luminaries.  Well, that and anyone who used the phrase "limp dick."

But the fun for us homos was the incessant stream of homophobia filling the crowd.  They didn't laugh at the Brokeback Mountain jokes b/c they are stupid homophobes who wouldn't know satire if it broke into their doublewide and stole their prize beer can collection.  As the jokes rolled on, our discomfort grew.

Obviously, I can take a homo-themed joke.  It wasn't the jokes that bothered me.  It was the almost universal gay-loathing that filled that room after every mention of man-on-man sex.  It is when I have to start worrying that someone is going to get in our faces b/c we "look" like lesbians.  It is when someone asks me why I came and I have to censor myself b/c I probably need to not tell them I do a lesbian correspondent bit with one of the comedians. It is when I have to refer to my partner as my "friend" just in case someone is going to hassle us.

I mock the attendees.  But I still think they deserve basic human rights like the freedom to marry, to reproduce at will and walk about their daily life unmolested by bigotry.  That's what makes me different.

Not returning to Seven Springs am I.

A quick round of the PG's latest gay coverage ....

First, the ugly.  From Jennifer Freker  of Bethel Park a letter to the PG editor ....

God created Adam and Eve, not Adam and Steve!

You tell 'em Jennifer.  Make sure we know all about the abnormalities of a Godless society and how much friggin' bravery it takes to calls gays "sick and perverted."

Listen up you homohater... before you continue spewing about the Pledge of Allegiance being ripped out of the schools, you should take a look at how YOU have excluded God from your personal beliefs.  Remember the parts about loving your neighbor?  The things Jesus said.  People like you give Christianity a bad name.

Now the good, a letter from Devin Browne of the Hill District pointed out that while homos are good enough to teach in the Pittsburgh Public Schools, our families aren't deserving of equal health insurance coverage ... he correctly writes:

This restriction is something most conservative megacorporations gave up years ago.

And, last, a blurb from The Morning File ... the evangels are up in arms over Starbucks.

Our own Bob Casey told a crowd of 600 attending a HRC gala event that he will fight discrimination against gays.  Unlike Senatorum and his loyal spokesfag Robert Traynham.

''I think it's time we had a senator who wasn't pushing a narrow, intolerant ideology that says 'I'm right, you're wrong ? and you don't know better,''' Casey said.

The Casey campaign is cause for raging debate in local progressive circles, especially among those who decry his prolife/antichoice position.

Me?  I'm torn.  I think Casey is our guy and I don't see the point of the "Run Barbara Run" signature files that pop up every once in awhile (referring to Barbara Hafer of course) from the leftie progressives who email me.

But .... BUT .... recent events at the DNC do not bode well for queers and the Democratic party. Howard Dean would strike anyone as more gay friendly than Bobby C.  Until he abolished gay outreach and struck every reference to queers in the grassroots report.

From our friends at Steel-City Stonewall Democrats, here's the skinny from social conservative Lynn Swann on gay marriage ...

Drum roll ... while marriage is between a man and a woman, he does think private contracts should take care of us queers.   With no governmental protections.

Now for my personal diatribe ... here's why Lynn Swann sucks.  Not only is he an elitist jerk, but he shows up at the Super Bowl MVP gig to promote hs campaign.  Now Franco Harris shows up to support the Steelers.  Pulls out a Terrible Towel!  That's classy.

Swann's showboating was almost as pathetic as Terry Bradshaw staying home to pout b/c they wouldn't pay him to show up. At least Bradshaw's buffonery is limited to those who pay money to see his movies and fail to click away during his commercials.  Lynn Swann might actually do some real damage to people who don't matter in his realm.

The DNC's Annual Grassroots Report was released last week.  Not a single mention of the LGBTQ community.  Nada.  Howard Dean eliminates the gay outreach post, then wonders why people are upset .... and now this ....

So what's happening in the Pennsylvania/Pittsburgh LGBT democratic wing ....You tell me.

Here's what BlogActive and LGBT political activist Mike Rogers has to say about the LGBT politicos we should trust.

In an expected (but pathetic) twist to the Penn State Lesbian Discrimination case, lawyers for anti-lesbian coach Rene Portland and the University argued that the non-discrimination policy was a non-binding contract.

You expect this from Portland who obviously didn't bind herself by the policy.  Plus, she's also claiming that former player (and plaintiff) Jennifer Harris was NOT dismissed based on her sexual orientation.  Just in case that doesn't wash, Portland has a backup plan to say it wouldn't matter anyway.  Yuck.

But it was the University's policy.  Why have a policy that you have no commitment to honor?  Unless you just want to appear cooperative and homo-friendly until it begins to actually cost money.  Hmmm....

Penn State sucks.  I am officially putting away the PSU baseball hat my honey brought me last fall.

Not to stand silently by as the party trashes gays and lesbians, Stonewall Democrats have issued a statement about Howard Dean's insensitivity to the gay and lesbian community and condemning his actions totally kissing Howard Dean's ass:

the DNC eliminated the GLBT outreach office but is keeping the GLBT fundraising office. As Gardenhire puts it, "Our money may be good enough, but we are not." 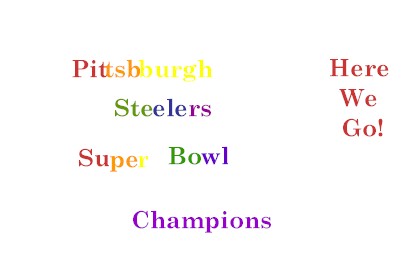