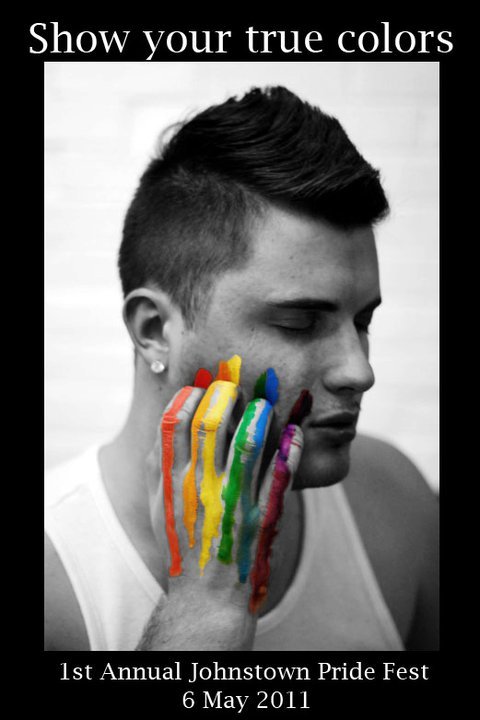 The event is sponsored by the Highlands Community College Allies Club and the Keystone Alliance/Gaylife Newsletter.

What a tough year for Joe Sestak and Dan Onorato. Philly and Pittsburgh Pride are on the same days.  Onorato made the good call to attend Pittsburgh's event, but Sestak is in Philly. 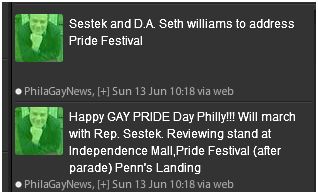 Sestak is sending a surrogate to Pgh, but I think it might speak volumes as to whom he sends.  As I said earlier in the year, I truly think his failure to attend the Steel City Stonewall endorsement event cost him the endorsement. Of course, it could be the decision to endorse Specter that impelled him to stick with Philly.  Who knows?

I spoke with Bill Peduto last night and he confirmed he's attending (he was out of the country last year).  I think there were years when Bill was the only politician who attended.  How far we've come ...

Right now, thousands of lgbtq folks are on their way down to Liberty Avenue for the biggest celebration of the year ... 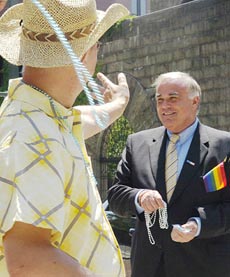 Check out this nice piece in the Post-Gazette.  It is a nice article and a nice festival, but I have to admit some sadness that the political/activist edge of Pride has morphed into a celebration of assimilation.  I know that's the trend and it certainly isn't the fault of anyone local that Pride has lost some of that bite. Still ... it seems less than stunning when three white men are the symbols of progress.  All three are accomplished certainly, but I'm just reflecting the disillusionment women and persons of color have been sharing with me.  It is "nice" but not really telling all of us that we belong , isn't it?

And then there is this column from the Tribune Review.  Again another nice piece.  I like the Mr. Rogers references ... he was known for being a gay advocate in a quiet appropriate way for a preschool rock star.

Still, Pride coverage hit both papers proving once again that the local media is paying attention to LGBTQ issues. I'll be at Pride and admittedly would like to see a Kip Williams moment when the ahem, elected advocates take the stage. Maybe I'm naughty, but I'm sucking it up for the good of the cause.  I do deserve a little snark here and there, though.  You wouldn't believe me if I extolled Onorato's LGBTQ credibility anyway, would you?

I don't really care. I care about Ricky Burgess not putting his photo in the Pride Guide. What's up with that?  Who is working on it or are we supposed to once again let the behind the scenes folks take care of it? That didn't work out so well for Cue Magazine's coverage of the homo-donut shop and it won't work here.  Well, let me correct myself, it will work for the time being but at some point ... do we all belong if a significant leader in the African-American community bitch slapped the Pride committee?

Gosh, I've been so caught up in DADT, work and wrestling with my bike that I haven't given very much attention to Pittsburgh PrideFest.

It is right around the corner.

This coming week, we'll see a political rally with Cleve Jones, the Dyke March and the GLENDA Diva's for Diversity.

The official Pride Guide 2010. I like that its up now so you can check it out before the event.

Perspective?  Moscow Pride is thrilled they managed to march for five to ten minutes.  Pride is illegal in Moscow.

Love, love the guy using his smart phone while marching!  Such a me thing to do.  I usually live tweet the Dyke March and inevitably trip over something.

Office of the Press Secretary

Teenie Harris.  You may have heard of him -- photographer, documentarian of life in the Hill District for nearly 30 years (30's - 60's) which was, as you know, a period of intense socio-economic, cultural and demographic change.  Harris exhibits are nothing new for Pgh, but this one provides a unique glimpse into what is generally assumed to be an anomaly in Pittsburgh - historical queer black life.

While clubs such as Little Paris, the Loendi Club and even the famed Crawford Grill weren't necessarily gay-owned or specifically gay clubs, they hosted cross-dressing performers and welcomed a gay audience. In some photos in Carryin' On, in fact, female impersonators are backed up by legends of jazz and R&B, likely after their pay-gigs let out: R&B singer Sonny Hines, legendary drummer Joni Wilson, pianist Roy Hamilton. In one of Tines' favorite photos, a car, bedecked in streamers and toting a huge speaker on its roof, drives slowly along in one of the Hill's annual parades. On the car's hood, two drag queens bear a sign: "Meet Me at Little Paris."

The exhibit is the brainchild of Deryck Tines who serves as guest curator for the exhibit.  Tines plans to work with local photographers to document today's queer scene for a planned "Then and Now" exhibit in 2008.  (Tell your queer photographer friends.) 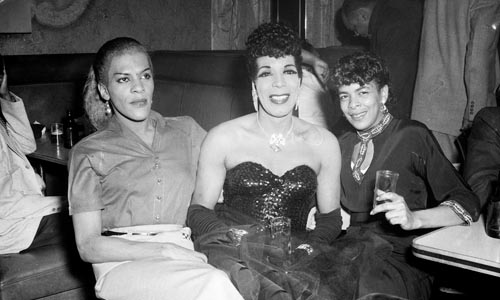 I'm really interested in Deryck's plans to capture the current queer scene. I wonder what the photographers are going to document?  Most of the "images" the media feeds us involve this perception that the African-American community is highly homophobic.  The City Paper did a stunningly awful job on that front in April of 2006 <how can you write about the local gay black experience without including local gay black women?>

My African-American friends deny that is true and regale me with stories about their parental generations mingling freely with gay individuals.  I'm sure my slice of friends are not representative b/c of the fact that they are friends with a lesbian, but still there's this dischotomy.  That's my new word ... dischordant + dichotomy = dischotomy.