I usually learn a few interesting things when I chat with folks about this blog, but I have to admit to learning a *whole* lot during my recent conversation with Ms. Pittsburgh Leather Fetish 2011, Jessi Seams.

The first ever Ms. Pittsburgh Leather Fetish, Jessi is among a handful of transwomen across the country to hold similar titles.  And she has eyes on a much larger goal -- to become Ms. International Leather 2011 at the upcoming April competition in San Francisco.  Ms. International Leather celebrates 25 years and bills itself as the longest running female leather competition.

A Rainbow Munch Demo on Fire

Join the Rainbow Munch of Pittsburgh as we share more knowledge with a demonstration and class on Fire Play.  Wednesday March 16th at 7pm we will be hosting this event at the GLCC of Pittsburgh.

The class will show some of the beginning ways one can play with fire in a sensual and non-sensual way.  The class will cover basics from fire baton construction to more advanced play such as fire cupping.  This class should be a really hot time.

Where: GLCC of at

Who: The Rainbow Munch of Pittsburgh instruction by Atea

2011 is the first year an official Ms. Pittsburgh Leather Fetish took place in Pittsburgh. Long-time organizers of the Mr. Pittsburgh Leather event, the Three Rivers Leather Club and Steel City Bondage Club, approached Jessi and asked her to compete. Pittsburgh does not have an official women's leather group, but according to Jessi there is a thriving leather scene for local women.  Women's group have historically grown from queer women hanging out within the men's leather community and slowly building their own networks, as have the women's competition.

Jessi  and one other woman participated, with Jessi taking home the title.  Mr. Pittsburgh Leather moved on to the Mid-Atlantic competition which he also won.  There is no official hierarchy with Leather competitions, no need to go from Ms. Pittsburgh to Ms. Pennsylvania to Ms. USA, etc. Next stop for Jessi is the International competition in California this April. 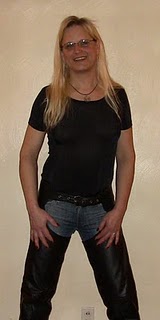 However, much like a traditional title competition, Ms.Pittsburgh Leather Fetish has obligations to fulfill. Jessi is committed to a certain number of appearances, advocates for the leather community and will coordinate a charitable project amongst the female leather community.  She will also be recruiting women to compete for the 2012 title and generally spreading the word that this community and the opportunity to compete exist for women as well as men.

Jessi is currently using her blog to recruit sponsors for her participation in the International competition where she plans to advocate for trangender health issues as part of her platform.

Why should Pittsburgh care about the odysseys of Mr. and Ms. Leather Pittsburgh?  Jessi believes bringing home a major leather title will bring more recognition to Pittsburgh, particularly among the LGBT community. This is good for local businesses who want to attract LGBT tourists to the City and their businesses. She points to the rich philanthropic history of the Three Rivers Leather Club as a prime example of how much the leather community "gives back" to the LGBT community and the region.  In addition to a large Toys for Tots drive, they are regular volunteers at the Shepherd Wellness Center, Pridefest and more.

Best of luck to Jessi Seams as she pursues the Ms. International Leather title.  Follow her blog to keep up with her adventures.

David Dean
Three Rivers Leather Club, President
Steel City Bondage Club, Founder
Mr/Ms Pittsburgh Leather Fetish, Owner
Re: Local woman pursues International Ms. Leather title
by Anonymous on Thu 10 Mar 2011 09:27 AM EST  |  Permanent Link
How can the GLCC allow that? Do they have an adult zoning license? Aren't those kinds of events illegal? They better be careful... Cattivo too...
Re: Re: Local woman pursues International Ms. Leather title
by Jessi Seams on Fri 11 Mar 2011 07:46 AM EST |  Profile |  Permanent Link
NO! those events are NOT illegal!
and this statement is just one of the reasons I am Proud to be Ms. Pittsburgh Leather.
allow me to introduce to you the NCSF. https://www.ncsfreedom.org/
the Nation Coalition for Sexual freedom.
whilst certain aspects of bd/sm may still be illegal in some states.
the NCSF has fought and won many battles concern the lifestyle and the discrimination around it. NCSF also lent assistance to the local communities in San Diego and Baltimore, to help to stop the selective enforcement of zoning and public indecency laws against the SM-Leather-Fetish communities. Next, NCSF assisted the local communities in Attleboro, MA and Washington, DC as those cities faced the same selective enforcement that had been attempted in Baltimore and San Diego. NCSF continues to work with State Attorney Generals and local District Attorneys to help educate these authorities about SM, swing and polyamory practices to prevent dangerous precidents from being set against adult consensual sexuality.

If getting aroused is a zoning violation, I think we'd have a much bigger issue to deal with than fire batons and nipple clamps.

The GLCC has been a sex positive place for a long time. I coordinated a sex toy party there about 5 years ago and it was packed. It was even potluck!