I have to give Ron Razete of Peace, Love and Little Donuts credit. His anti-gay bigotry was on display in the Post-Gazette, the Pgh City Paper, national blogs and the Urban Spoon and he didn't miss beat nor repent a single vile word he spewed.

What did he say?  Here are some excerpts from his now defunct blog. Razete drew quite a response from the lesbian blogs (ahem) to the radical queers to LGBT business owners.

But getting a two page spread in Pittsburgh's LGBT magazine, Cue Pittsburgh, is stunning. How on earth did he get free publicity from a gay publication?

It does prove my point that he's using the "peace, love, hippie" theme as a marketing ploy, but I'm intrigued how this played out.  Did the wingnutters go looking for a palatable gay media source?  Was this calculated or just chance? Did the wingnutter know what kind of magazine was interviewing his daughter?

The undeniable fact is that Cue Pittsburgh missed the boat in a big way. I wonder if the editorial staff is paying attention to local LGBT news if they simply "forgot" about the donut scandal?  I am puzzled. It would be one thing if they were reviewing heterosexual owned businesses and overlooking gay owned companies, but this guy really hates us.  How does Cue plan to respond?  Will they step up and take responsibility for putting gay money in the pocket of a rabid homophobe?  I truly hope so. 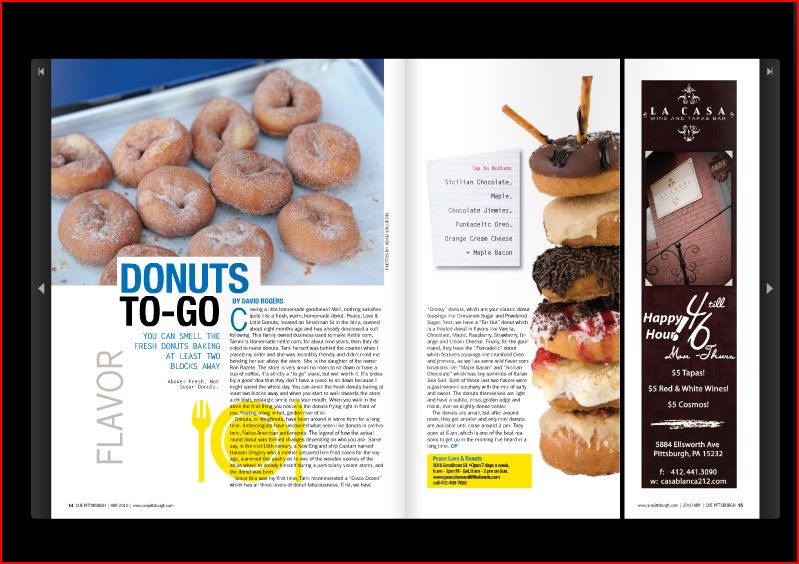