I was facebooking with a nameless colleague about finding interesting people to follow on twitter. I'm following Ashton Kutcher based on the recommendations of Television Without Pity.  I also follow Ellen but she's pretty quiet.  Ashton is fairly active.

Locally, I follow my friends and a few politicians.  I have to admit a lot of it is ho hum.  I don't care about the fact that you are heading out the door.  I want the juicy details from the conversations you have.  The ones that you have to stop to capture before trudging on down the block.

JimLokay is good for traffic detours.

The papers are good for breaking news.

Anyone else? Suggestions?  Who SHOULD be tweeting? 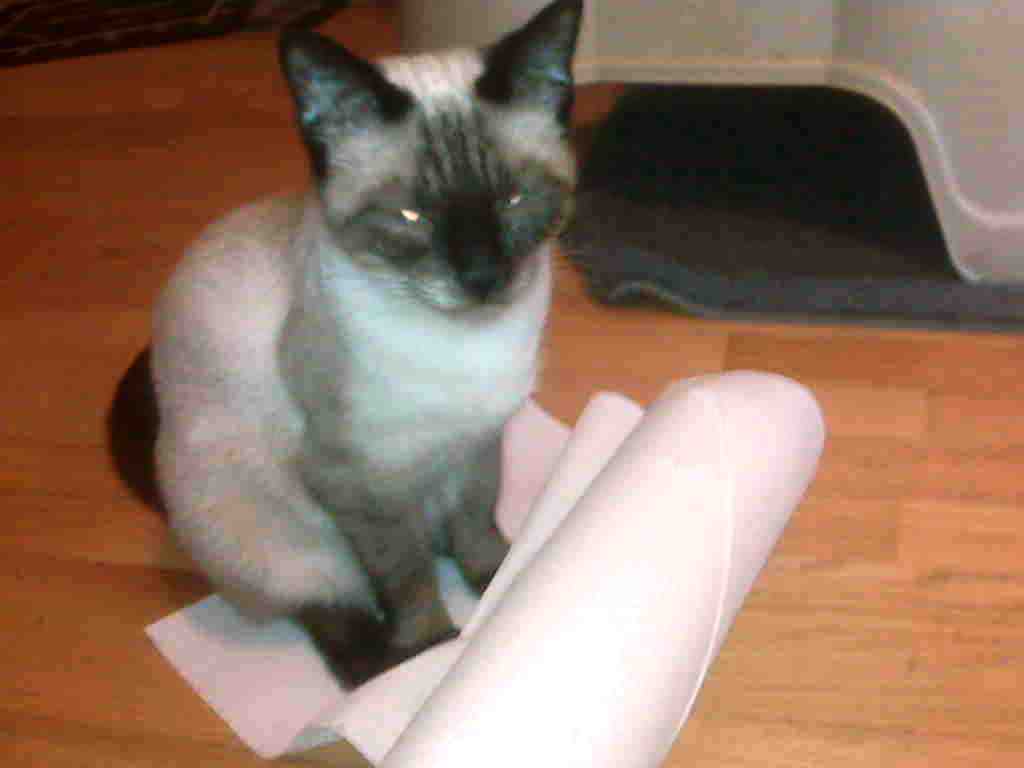 The transformation from cuddly Siamese kitty to mutant superhero begins as Coco/Wolverine subdues her foe. 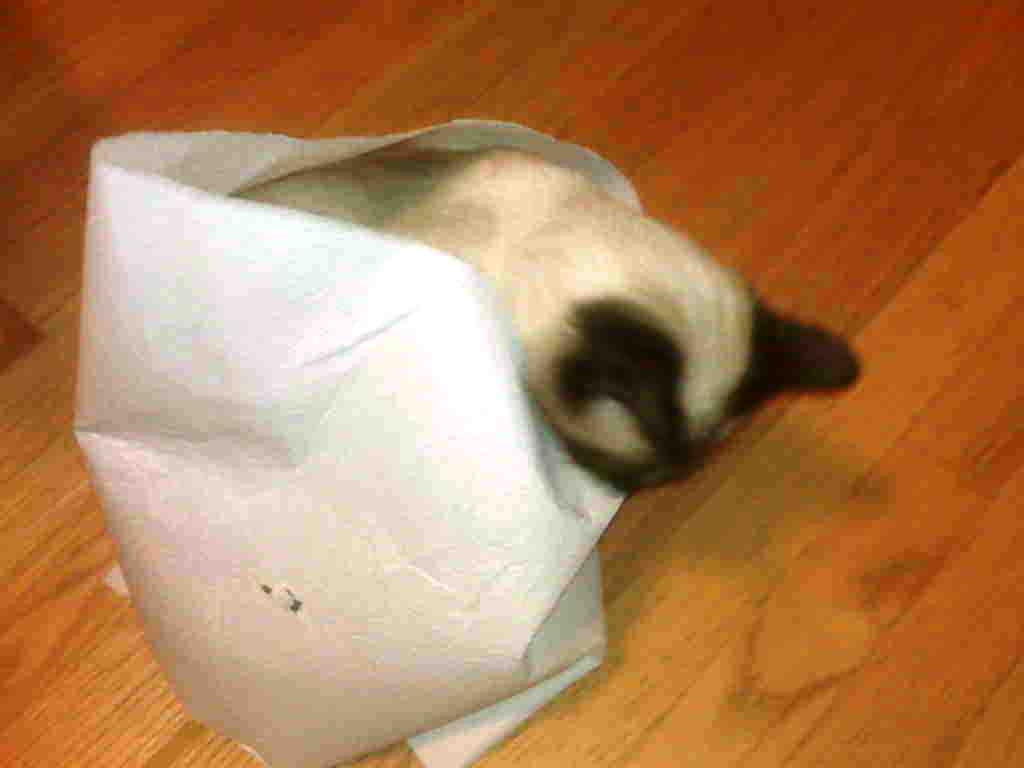 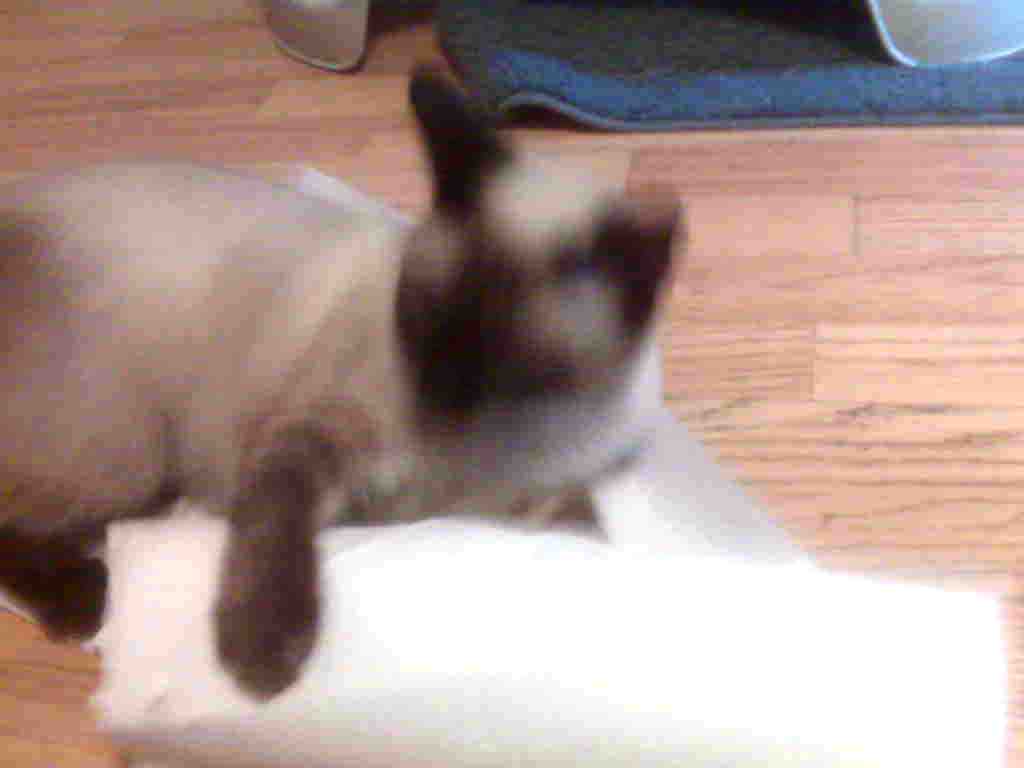 Don't let her fuzzy cuteness detract from her vicious attack of the renegade (but 100% recycled content) paper towel roll.

Keori has a legislative round up over at Pam's House Blend.  Great job wrapping up the national scene in terms of LGBTQ legislation.  No news in terms of Pennsylvania.

And because it is so wonderful, GAINESVILLE VOTED DOWN A REPEAL OF ANTI-DISCRIMINATION LAWS THIS WEEK!!! WOOOO!!!!

I encourage you to check it out.  There's really quite a lot going on.  The comments section is filled with even more detail.  It would be awesome if some of the local folks working on the Allegheny County Anti-Discrimination Ordinance tapped into Keori as a resource to keep some national scrutiny on their efforts.

Persad is launching a new afterschool program for LGBT youth.  This is awesome news.

Beginning in April, will offer after-school services to youth ages 14-18.  The after-school program will be housed at the Gay and and will operate from 3-7 PM on Tuesdays and Thursdays, expanding days as attendance increases.  Unfortunately, many GLBT youth are confronted with bullying regularly as part of their school day.  Harassment results in youth avoiding certain classes or missing school and this leads to poor school performance and can affect students? lives far beyond their school years.  Many youth struggling with their sexual or gender identity lack adult support and their isolation makes them vulnerable.

The After-School program will provide a safe, supervised and supportive environment for teens to interact with their peers, receive important prevention information and treatment services when needed, and get their homework done.  Persad is looking for a few teachers and educators who are willing to become volunteer tutors in the program.  For more information about the after-school program or to apply to become a volunteer, contact Melissa at 412-441-9786 x233.

This is a wonderful opportunity to make a difference and a much needed resource.  I know from personal experience that having supportive adults in your academic world can just make a world of difference.

The Bilerico Project, a huge national LGBTQ blog, went "dark" after being targeted by anti-progressive hackers.  Read about it here.

Bill Peduto is asking you to turn off the lights from 8:30 - 9:30 tonight to help raise awareness about environmental issues.  Can you do that?  Can I?  Ledcat is going out tonight so I am wondering if I can cheat by turning out my lights and using my laptop battery?  Does that count?

DISAPPOINTMENT:  A motion to pull the Hawaii civil unions bill from the deadlocked Senate Judiciary Committee failed this afternoon 18 to 6, effectively killing the measure. The legislation passed the House of Representatives by a 33-17 vote on February 12.

Sen. Gary Hooser, who made the motion to pull the bill from committee, urged support for the bill; however, opposition by Senate President Colleen Hanabusa helped convince senators to vote against bringing the bill to the floor.

?Today?s vote is a great disappointment for loving, committed Hawaiian lesbian and gay couples,? said Family Equality Coalition Co-Chair Alan Spector. ?We share the sadness of all who hoped this vote would go differently and that the state would take a step toward equality for all Hawaiians.?

Today?s vote helps no one in the state of Hawaii. It protects no one?s marriage. It grants dignity to no couple?s relationship. It does nothing to ensure that all families receive the equal rights and responsibilities they deserve. But no one is giving up.  The Human Rights Campaign is proud to have partnered with the Family Equality Coalition on behalf of this critical legislation. It has been a long, hard struggle for couples and families in Hawaii who simply want equal rights, and this effort continues, as it does across the nation.

In an AP story, Senate Judiciary Chairman Brian Taniguchi said there?s still hope that the bill could be amended and revived, but that probably wouldn?t happen until next year.

You may remember an earlier story I did highlighting an offensive cartoon published in a Hawaiian newspaper owned by owners of the Pirates.

This is one of those complicated corporation issues.  On the one hand, the Nutting family makes money selling papers that bash our community (the cartoon compared gay marriage to marrying a sheep).  On the other hand, they make money organizing a "Pride Night at PNC Park" during PrideFest.

Domald Wildmon's conservative homo-hatin' AFA is at it again. That dodo  is pissed at PepsiCo because the soda company gave $500,000 to PFLAG and another $500K to the Human Rights Campaign. And to add insult to injury, Dobson he got what he terms a "condescending" letter about the matter from Pepsi's director of public policy Paul Boykas. Wildmon has worked his Bible into a bunch because the organizations are using the money to:::gasp!::::

help promote homosexuality in the workplace. Pepsi refuses to give money to any pro-family organization that opposes the homosexual agenda. Plus, every homosexual organization we know of is overwhelmingly pro-abortion.

Apparently, Pepsi isn't trying to have it both ways.  Pepsi.  I drink Coke so this is like a little moral quandary for me.  Hmmm.  However, we should take a moment to say "thanks" to Pepsi for being consistent.  Here's the contact information courtesy of the AFA.  Just reverse the information.

Sign the Boycott Pepsi Pledge. After signing the pledge, please call Pepsi (914-253-2000 or 1-800-433-2652) and tell the company you will boycott their products until they stop promoting the homosexual agenda.
Call the Pepsi bottler nearest you and ask the bottler to ask Pepsi to stop supporting the homosexual agenda.
Pepsi's products include Pepsi soft drinks, Frito-Lay chips (800-352-4477), Quaker Oats (800-367-6287), Tropicana (800-237-7799) and Gatorade (800-367-6287).
Print out the Boycott Pepsi Pledge and distribute.
Forward this e-mail to your friends and family so they will know about Pepsi's support of the homosexual agenda. Millions of people are not aware of Pepsi's support of homosexual organizations.

So if you are disappointed about Hawaii, you can do something.  You can call Pepsi (or Quaker Oats if you want to be healthy).  Thank them.

Then go to PNC Park and order a Pepsi.  Does our PrideFest serve Pepsi?

First, let me say that rockOUT is an awesome name for the Slippery Rock campus LGBTQ organization.  Kudos to whomever came up with that moniker.

The faculty co-advisers have an (I can't help it) awesome letter in today's Post-Gazette, supporting HB 300.  Here's a snippet:

This isn't about "pursuing a homosexual agenda" but about extending basic rights to all people in a country dedicated to equality and fairness.

The simple (and sad) reality is that the lesbian, gay, bisexual and transgender community continues to wake up daily in a world where hating "gays" is still somehow acceptable, where calling a boy or a man a "fag" is the worst insult imaginable and where a lesbian is gang-raped simply because she drove a car with a rainbow gay pride sticker ("4 Arrested in Lesbian Rape," Jan. 2).

Ah, the "r" word (rhetoric) once again nailed into its rightful place as inflammatory speech.

Cindy LaCom and Sharon Sykora capture the most fundamental element driving homophobia in the United States -- men's fear of being labeled queer.  They don't have room to delve into the underlying misogyny driving that statement, but the simple truth is that there are many heterosexual men who are so threatened by any perceived challenge to their masculinity -- so insecure in their own skin and identity -- that they will use every institution at their disposal as a weapon in their defense --- church, school, government, whatever.  They simply cannot tolerate men who want to be with other men or women who do not want to be with men at all.  This insecurity drives acts of indescribable violence (the rape mentioned above) as well as the much more civil, but equally hateful discourse in the State legislature and the Presbytery meetings recently conveened to discuss homosexual issues.

It is fear wrapped up in the cloak of hatred and while HB 300 will help to protect us from both, it is incumbent on us to be more proactive in addressing the fear itself.

Things have gotten better, certainly, and continued education, advocacy and activism will bring us all closer to our country's ideal of "equality for all." In the meantime, we thank you for endorsing that ideal. We do, too.

Amen, ladies.  Thank you for writing.

My friend Debby is the founder of Damon?s Den Doberman Rescue, based in .  She is a local dog trainer and a great person.  She?s holding an unusual, but cool fundraiser to help pay for the recuperation of a specific dog which was found abandoned in a foreclosed home (sigh!).  As you get ready for your spring car washing, keep this in mind.  The car wash recently changed hands so the sign just says Car Wash. 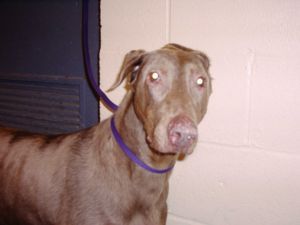 > qarea or travels through there frequently may be interested in these.

> deluxe wash. This car wash is a hand car wash. They are great. The

> coupons are available for $12.00 and Damon's Den Doberman Rescue gets

> 1/2 the proceeds. We currently have in rescue, an 8 year old female we

> foreclosed home in McDonald. A neighbor heard her and broke in and

> brought her to the WPHS. She was almost bald, she was badly in need of

> thyroid meds and good nutrition and TLC. She is doing better but we

> the right dosage. If you are interested in these coupons, please email

> me at dogslife4me @ comcast.net You can see (and the other dogs we have now)

at www.damonsden.petfinder.org Thanks in advance!

I?m hoping to find a local business to help sell the tickets so can get back to full health and find a loving home.

Dick Marshall of Crafton writes a moving tribute to his deceased father, noting his loving acceptance and celebration of Dick's identify as a gay man.

My father died nine years ago, encouraging me until the very end of his life to be a compassionate, nonjudgmental, loving and inclusive man. He encouraged my leadership with mentally challenged children and as a facilitator with HIV and family groups affected by AIDS. He also encouraged me to stay active in my church. My father loved me unconditionally as his gay son as he loved my brother as his straight son. He would have hoped (and prayed) that Mr. Fox would one day feel similarly about his own beloved son, and I imagine that he would have wanted to quietly and firmly shake Mr. Fazzini's hand.

Mr. Fox and Mr. Fazzine testified at the recent Presbytery meeting on gay clergy.  Mr. Fox said he loved his son but deplored his identity as a gay man which he deemed sinful and unworthy of providing leadership in the church.  Mr. Fazzini also has a gay son of whom he states he is inordinatnly proud and clearly deserving of a church that affirms and celebrates him as a complete being, not in spite of his identity.

Mr. Fox makes me appreciate my parents.  They won't join PFLAG anytime soon, but they love and accept Ledcat and me.  My parents are willing to leave their comfort zone to participate in our lives.

Kudos to Mr. Marshall for providing yet another example of the power of the letter to the editor.  Please won't you write your own?