It has been a busy day in the big city for us.  The Initiative is just ... really cool sums it up best.  The majority of yesterday's inconveniences were forgotten in the many small nifty things that we experienced today.  I met Pam Spaulding and Autumn Sandeen from Pam's House Blend.  Jake Kaskey from Equality Advocates is here and we had a nice chat during our walk over to lunch with the Victory Fund conference.  Nick from PageOneQ.com, Jeremy, Lane, the list goes on and on.  With apologies to Gab Bonesso's comedy skit, it was this surreal fusion of real-time cyberstalking, gushing groupie experiences.  And that was before the coffee arrived.

One strength of what we've been doing for the past three years is our attempts to contextualize LGBTQ "issues" in terms of our actual lives.  While I may often veer into the mundane, I try to make this blog a reflection of my real life experiences as a lesbian living in Pittsburgh.

The session that was very impactful was on activism and advocacy.  We talked quite a bit about the consequences of generating attention via blogging and to what lengths folks will go to get the story for the cause ... hidden microphones, etc.  I have a whole array of gadgets to purchase. LOL.  Watch out!  Seriously, it was inspiring and I wish more advocacy groups from Pgh were part of this conversation.  We have a long way to go in terms of cyber-organizing.

Lunch, as I mentioned, was where we joined the Victory Fund conference going on concurrent to ours.  Kate Clinton was emceeing and was quite hysterical.  Barney Frank was the keynote speaker and was just brilliant ... he spoke with so much hope and optimism about the new Administration.  I wanted to believe, I really did.

Speaking of Ana ... check out our girl at "bandcamp" with Aunt Debby ... 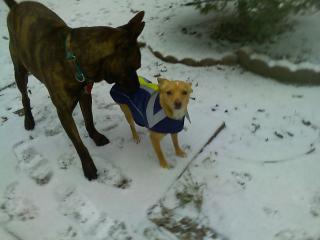 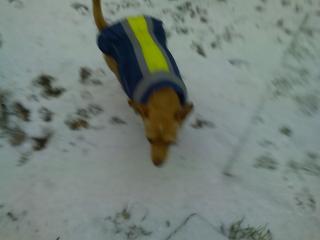 Ana wearing her glow-in-the-dark winter coat.  She gets positively ecstatic when we pull it off the coat rack and wriggles so much that it becomes quite a challenge to wrap her up.  It proves very useful at night when you need to track her movements and assure she actually leaves the deck to visit the yard, but you are wearing socks/slippers and it is rainy and cold outside.  We call it her "Bat Cape."

That's it from this end.  Coming up in Pittsburgh's gay week .... the Steel City membership meeting on Tuesday evening and Mayor Luke's GLBT Advisory Council planning meeting on Weds.  My goal is to live blog both events, but storm delays could hamper those plans.  I'm sitting down to chat with City Councilman Bruce Kraus.