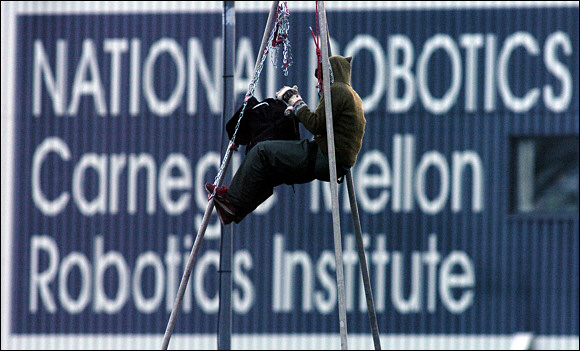 About 50 people were involved, including those chained together, those bringing them coffee and food, a makeshift band and other supporters.

This is the type of civil disobedience that makes me proud to be a member of the Thomas Merton Center.  Unlike the incident last year where a cameraman was struck during an allegedly nonviolent protest.

Comments
Comments Closed in Archive
Re: Pittsburgh Civil Disobedience Done Right
by Anonymous on Sun 04 Mar 2007 01:58 PM EST  |  Permanent Link
just so you're aware both this protest and the one on Aug 20 were organized by POG. Neither one was organized by the Thomas Merton Center. I guess this is a case of condemn us if we do something you don't like, give someone else the credit when we do something you do like.
Re: Re: Pittsburgh Civil Disobedience Done Right
by Sue on Sun 04 Mar 2007 06:06 PM EST |  Profile |  Permanent Link
Actually, you are jumping to conclusions. I am well aware that POG and TMC are not one and the same. I, however, am not a member of POG and was merely commenting that the positive outcomes of this protest affirms my personal reasons for affiliating with TMC.

I don't condemn POG. I have been critical of the leadership decisions surrounding the August 20th protest as well as the personal choices made by protestors. But POG as an organization plays an important role across the spectrum of political dissent and I hope they continue to thrive.