This was one of my favorite LGBTQ events of all time. It was joyful, fierce, unified and humbling to wind our way through Bloomfield yesterday afternoon.

The event kicked off with a call to action from Dykes on Bikes founder, Miranda Vey.  She uses the term "queer patriot" to describe the power within dykes and other LGBT persons to claim their rightful place in society at large as well as the local gay hierarchy. I've heard Miranda speak before and she is very open as a transwoman to name the privilege she took for granted as a white man before she began transitioning.  She's not afraid to talk about it and she's not intimidated in the least to turn around and call out those who continue to use it to hold down women, queers and other disenfranchised communities.

Miranda has been a longtime supporter of this event, helping to raise funds and bringing the dykes on their bikes to protect the march route when the police failed to show up.  She is a dyke hero, a powerful woman and a force to be reckoned with.

The march kicked off a few minutes before 3 PM and wound its way through Bloomfield, attracting a signifcant degree of attention from residents and business patrons alike.  People took pictures, video and simply stood watching as this colorful, eclectic group of women strode through the streets with signs, banners and a fierce determination to demand they be seen.

I intentionally monitored the reacton along the sidewalks and it was a mixture of "you go girls" and amusement.  There was very little animosity with the sad exception of a ten year old child screaming "Git out of here yinz bitches." I think most people had no idea what was going on other than a group of very interestingly clad gay women were suddenly visible in a way Bloomfield never experienced.  (There were plenty of signs though).

And isn't that the point? Visibility?  Pittsburgh Pridefest "shuts down" Liberty Avenue Downtown to commemorate and celebrate Prde so how fitting that the dykes kick it off further up that very street.

Something else was new this year.  The Mayor's LGBT Advisory Committee and Councilman Bill Peduto's office  worked with the Department of Public Safety to ensure the City Police were out in full force, after four years of major failure to provide this essential service.  There were more than five cars and plenty of officers.

I spoke for awhile with the Officer in charge and he was pleased with how smoothly things went. Aside from a few folks disgruntled by bus delays and the need to address some unruly youth, the police for the most part enjoyed the march with smiles.  He gave me some tips on how to tighten things up next year, but admitted that these snafus happen with all sorts of events.  It was all good from their point of view. In fact, in response to one person yelling at us, an officer responded "It is the First Amendment, buddy."

I also want to give a shout out to the YWCA and Adaggio Health which approached the march organizers with an offer to provide free water and had some LGBT health information available.  I spoke with a very nice woman who politely asked me to write about the Adaggio/GLCC health services. I will certainly do so because I really appreciate their support.  Water for a march is a good idea.  Hopefully, other LGBT organizations find organic ways to get involved next year.

Another shout out to Eric from the ACLU of PA.  Dyke decorum asks that men and straight women walk along the side in solidarity so Erin monitored the whole route because the ACLU cares about these things.

There is some misinformation floating around. The streets were closed at 2, the march kicked off at 3 and that happens all the time -- both the police and my City sources says street closures are not an exact science and I personally witnessed this happen with Pride year after year in the past.  Yes, it is frustrating, but Bloomfield did not self-implode because of an hour and a half street closure.  It would have been great had these concerned folks gotten involved last year when a Seven-Up truck almost mowed down a dyke family because the police did NOT close streets.

Others have been claiming the dykes never applied for permits in the past. That's not true.  Ledcat and I both saw the permits.  I had another homophobic encounter with the Special Events office for a different LGBTQ event. That's one reason I took this issue right to the Mayor's LGBT Advisory Committee -- it is a systemic issue, not an anomaly.  And that worked. Things improved dramatically and the remaining bumps will be tackled next year.

One interesting side note. One of the police officers asked Ledcat why women need a separate march.  She and some friends talked with him about the need for women to be visible in the gay community and he immediately "got it" as it relates to women in the general society - he began talking about how women are paid less and treated differently.  The quintessential "a ha" moment that would not have happened if this burly white middle aged police officer wasn't working at the Dyke March. 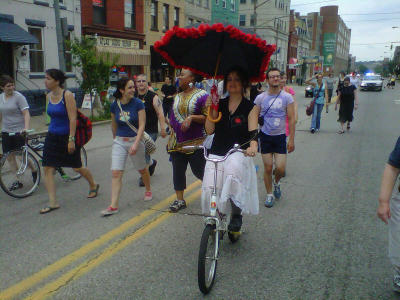 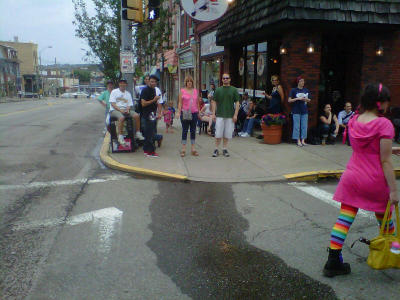 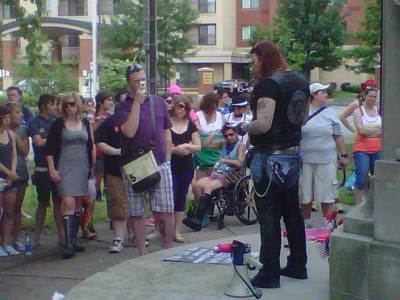 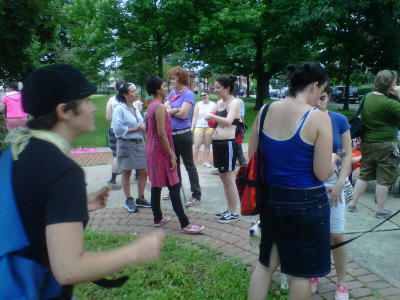 As I review this, I see a lot of police references. I think this was a critical part of the visibility piece -- the police attending and their overall positive response, as well as their engagement in conversation with the participants.  I can attest that it felt much better to march with the route secured than it has in the past when you were never quite sure what was going to happen with passing cars. And I do believe that the police presence sent a message to Bloomfield that this was an important march, an important part of Pittsburgh life.

Once again, congrats to the Dyke and Trans March organizing committee.  Looking forward to next year ...