As we've mentioned, local eatery Dozen Bake Shop has launched an official Lesbian Night on Saturdays.  Your faithful correspondents suggested they take it up a notch by offering a Buy One, Get One Free cupcake deal to lesbians with a special code or something.

Owner James emailed us to discuss and that's when we remembered ... the dyke salute. 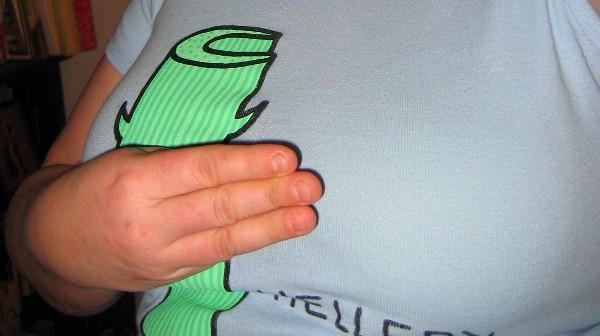 Created by lesbian-gal-about-town Ehrrin, author of Now That's Good Eatin, the dyke salute is a queerified version of the Girl Scout salute.  The only time I've seen it was courtesy of a certain local rocker at the Square Cafe.

But the dyke salute has risen again AND is irrevocably tied to cupcakes.  What could be better?

So, the next time Saturday night finds you in the East End, swing down Butler Street, flash the salute and enjoy the yumminess.

I am lobbying James to create a thematic cupcake recipe in honor of Lesbian Night.  My favorite?  The Salute which tastes like Thin Mint cookies. That would be awesome.

It is really nice to end my week on something queer-positive, even if it is just a local business owner saying he wants to reach out to lesbians.  After all the hullabaloo with what's her name in Oklahoma and the onslaught of campaign workers here in Pittsburgh, I am grateful that someone wants to give me free cupcake just for being a dyke.  Nice.