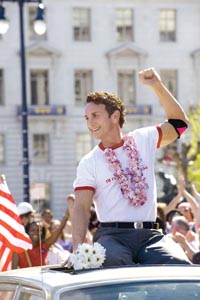 The movie opens this weekend in Pittsburgh.  Debate raged hotly at the recent LGBT Blogging Summit about the effectiveness of boycotting Cinemark theaters. Some cities are staging protests and candlelight vigils.  Others are working with the Sundance Film Festival to address the issue.  Cinemark has clammed up on the issue and will not return calls verifying their VP Bob Shimmin's claims that the company has an LGBT liaison.  One colleague mentioned to me that Cinemark had a gay employee who used to "handle" those things.  Not exactly the same thing, is it?  Comparable to the person who "knows computers" being the tech person for a non-profit.

This concern with Cinemark may not be an issue.  According to fandango.com, Milk is showing at the Cinemagic and the Waterfront only.  That doesn't preclude it opening elsewhere, but it is unlikely.  Huh.  We'll be seeing it at Cinemagic b/c its my favorite theater.  The Waterfront is too "busy" for my comfort zone.

Still, you might want to reconsider future movie visits to Cinemark owned theaters.  Why spend pink dollars where it is evident that the company is not fully committed to LGBT equality?  I realize that holds true for most of the places we spend money, but when it is so glaringly obvious -- when the company CEO spends $10,000 to take away our rights and the company tries to mislead us with a fanciful letter to 365gay.com -- why would you give them your money?  It is a valid question and one we face everyday if we try to be conscientious consumers (and voters).