I followed them among a few other companies as an experiment to see if I would be overwhelmed with spammy tweets.  Instead, I got free appetizers and a great dining experience.

After a few tweets sunk into my subconscious, I decided to take Ledcat out to P.F. Changs to test drive our new Warrior discount card.  I refuse to wait 1.5 hours for any restaurant so I called ahead on Thursday to get a reservation and snagged a prime 6:30 hookup which is perfect for us. Feeling smug about my reservsation coup, I did a little tweet about the plan. That prompted me to check P.F. Chang tweets to see if any additional discounts were in the mix.  I found a link to a marketing blog about a P.F. Changs dining experience. She parked, she updated Twitter and she was rewarded within ten minutes.

And you better believe that if someone asked me where they should have dinner on Cleveland?s east side, P.F. Chang?s would have been my first response.

Twitter can be a powerful marketing tool, and while it?s a great way to push out information, it?s equally, if not more important to monitor what?s being said about your brand, and engage with customers who are acting as brand advocates. Their voice can not only be influential to other consumers, but quality customer service through social media channels can create a customer for life.

Being mischievous and always willing to go there, I retweeted this link and "wondered aloud" if I would be similarly recognized at the Pittsburgh restaurant.  A few hours later, P.F. Changs direct messaged me on Twitter asking to confirm my registration time and location, then said mysteriously "we'll see you tonight."  I was intrigued.

We typically have good experiences at this chain.  The service is good, the food is tasty and with no anticipated wait, things boded well.  We weren't disappointed.  The surprise came at the end of the meal when the manager "comped" our appetizer (dumplings) and gave us a card for another free appetizer on a return visit.  That was a pleasant outcome.  We made sure to tip on the pre-comp total and everyone came out a winner.  Plus, we learned from our server that we could make reservations online.

So, P.F. Changs invested about $10 in our visit.  In return, I tweeted (which updated my Facebook status) about their brand name at least 10 times in 72 hours.  I told people we were going there and a FB comment discussion ensued about favorite menu items.  I tweeted when we arrived and what we were planning to order.  I updated when we spotted a table full of lesbians with a baby; lesbian parent friends on FB responded.  And I tweeted about the comp appetizers.  Now I'm blogging.  So hundreds of mentions even if you assume a fraction of my FB friends, twitter followers and blog readers read any of these various things.

Plus, we have new information that increases the probability we will return more frequently - the option to make online reservations.  We like Changs and it would be on our weekend restaurant rotation more often, especially during the holidays, if it weren't for the long wait.  The appetizer coupon will get us back soon during a shopping trip, but the online reservations might be especially luring (and help me plan) for year round visits.

My impression of the chain's food and service was pretty positive, but I'm now equally impressed with their social media savvy. I follow a few companies on Twitter with an eye on potential discounts/savings/sales and other special opportunities.  Hoi Polloi is promoting pumpkin smoothies which caught my taste bud attention and ensured I'll be there sometime over the weekend.  Franktuary regularly tweets and has me planning a jaunt downtown just for a dog.  21st Coffee and Aldo are pretty well updated and on my radar if I frequent their neighborhoods.

This stuff works, folks.  I became FB friends with my all-time favorite server (from Legends of the North Shore) so everytime I see his name, I think about eating there.  Even the horrid little donut shop churns out great status updates that leave me very hungry for donuts.  Note that homophobic blogging more than cancels out any good you accomplish with tasty FB status updates, but the point is ... it works.  The donut thing has me thrilled that Dunkin Donuts just opened a new store on Brown's Hill Road in Squirrel Hill/Greenfield.  (Yes, I just now googled "Dunkin Donuts on Twitter" and voila!  There they are!).

What's Going On ...
by Sue on Fri 06 Nov 2009 08:36 AM EST
Very sad news from Ft. Hood.  The backlash against mental health professionals makes me sad.  When people say things like "I deeply send condolences" while being interviewed on the set of Today, I don't believe them.  I think they deeply want the attention of the moment and care more about the limelight than helping America process a tragedy.  When people say "I deeply send condolences" on the scene or working in the aftermath, I believe them.

I am grateful that none of my family members are in the military.  I hope it stays that way because this was a brutal, horrific example of the damage the war machine wreaks on the innocent.  If reports that this man recognized his own damage and asked for help were ignored because we gotta send him over, then I'm sure they will be buried.  We'll focus on mental illness and gun control through the distorted lens of the media, but nothing will change.

Back here in Pittsburgh, the GLCC is ready to unveil their new digs on November, Thursday 19, 2009 at the official grand opening ceremony from 5-9 PM. Food, fun, prizes and free parking Downtown.  What could be a better way to get a little queer vibe on for your Turkey Day festivities? 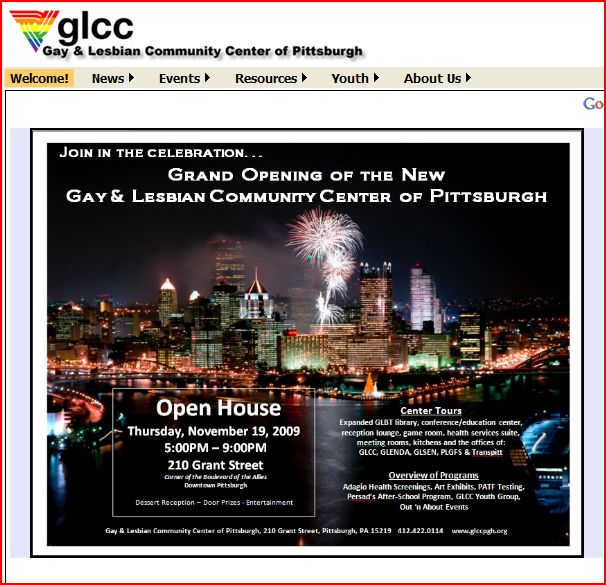 The Renaissance City Choir holiday concert is set for December 19.  I must admit that I've never been to a RCC concert.  That usually gets me a lot of looks of disbelief.  I'm just not a choral/choir person and I'm not a fan of concerts in general. Fell asleep at a Bruce Springsteen concert. I admire the institution and I certainly appreciate people pursuing a passion. I think it is just backlash from being exposed to the underbelly of Catholic Church choirs ... I prefer to just listen to music at home or in very short bursts.  Am I alone in that?  STILL ... this is a wonderful community resource and an annual event to which many people look forward.

The City Paper covered the Little Donuts debacle.  My coworkers were abuzz about the issue of UrbanSpoon censoring comments, especially targeting the gay community. Generated a discussion on the value of content driven sites.  I was sort of sleepy and annoyed that no one wanted me to autograph their copy of the City Paper, but also happy that so many of them read the print version (hey hey Mr. Potter).

Speaking of Mr. Potter, a bizarre burghosphere twist is that he of the alt weekly print blog edition has been designated the heir apparent of The Pittsburgh Comet.  He's damn good at it and Steel City Media should recognize a giant vacuum to fill.  (and my horrible use of the snip tool). 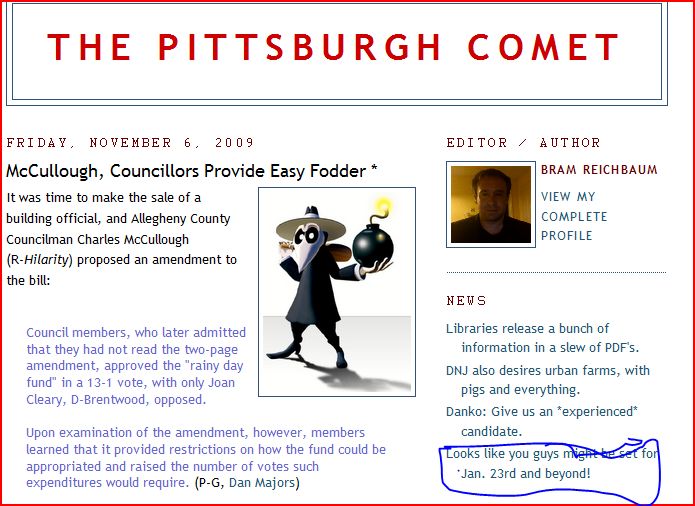 We love Slag Heap and not just because we grew up in the looming shadow of the Century III Mall slag heap.  Not we, me.  Well, my brother grew up there, too but doesn't read the blog.  He did get arrested for trying to climb the slah heap, along with Jeff Esper.  Yeah, it was a stupid thing to do.

But reading Slap Heap is a joy.  Potter's inner Comet comes spiraling out and does give me hope that someone aside from MSM Rich Lord will keep an eye on the status quo of the ZoberStahl administration.  I might even stop referring to the CP as MSM.

It is just good to feel optimism about SOMETHING.

The Good, The Bad and The Thing That Really Hurts
by Sue on Wed 04 Nov 2009 04:46 AM EST
It is not a good post-election day to be a progressive queer person.  A few bright spots, but being at my laptop at 4:15 in the AM is not a good sign for my overall state of mind.

Tom Michalow was not successful in his bid for County Council.  He fought a good fight and mobilized the local LGBT base like never before, but it wasn't enough.  I think Tom is a smart, energetic and experienced candidate and I'm comforted that we haven't seen the last of him.  Still, we've returned a man who thinks LGBT civil rights will discourage business and drive the Scouts out of business, not to mention an ardent defender of cutting taxes with no fiscal plan.  Sigh.  Thankfully, the balance in Council has not changed (the composition did not change at all), but it is back to the trenches to push for improved delivery to the LGBT community from within the current party structure, like it or not.

We are sending Joan Orie Melvin to the State Supreme Court.

On the national front, marriage equality no longer exists in Maine as the voters affirmed a proposition to repeal marriage rights for LGBT couples.  When I checked updates on my Blackberry at 3:30 AM, I knew there would be no more sleep for me tonight.

Anti-gay leadership surged ahead in New Jersey and Virginia (already a tough place).

The outcome of Washington State remains up in the air.  This proposition would expand domestic partnership benefits across the state.

Luke's number dipped. He won and I am resigned that the next four years will suck. For gay people who don't party with ... well, I guess I better keep my mouth shut, eh? Ah well.

I am glad we had the opportunity to support three candidates who value and affirm the humanity of the LGBT community.  I am sad we lost the support of would be progressive folks who will be back when they launch their own campaigns. And I mourn for families in Maine whose loss demonstrates that we have not learned our lesson about civil rights.